Lionel Messi: Is he really leaving Barcelona? Why is he leaving? Where will he move next?

Lionel Messi looks set to leave Barcelona 18 years after his senior debut for the club, with president Joan Laporta blaming the 'disastrous management' of the previous regime; will Paris Saint-Germain, Manchester City or another club be his next move?

It was news to shock football: Lionel Messi is to leave Barcelona.

Messi has spent his entire career at Barcelona, scoring 672 goals in 778 appearances since making his senior debut in 2003, but the sport is now braced for his exit.

Is it really the end for Messi at Barcelona or could brinkmanship be at play? Here's what we know so far about what appears an almighty financial and political wrangle...

What's the situation as it stands?

The official verdict is that Messi will leave Barcelona because the La Liga club is unable to fulfil the player's new contract.

The six-time Ballon d'Or winner has officially been a free agent since July 1, having not agreed terms over a renewal before his previous Barcelona contract expired on June 30.

The 34-year-old had been expected to sign a new five-year contract with the Catalan club, which would have seen his salary reduced by 50 per cent from £100m to around £50m per year, and arrived in Barcelona earlier this week still believing he would do so.

But Barca now say they are hamstrung by "financial and structural obstacles" - and laying the blame firmly at the door of La Liga and their previous ownership - with Sky Italy reporting PSG hope to convince Messi to move to Ligue 1 instead.

Speaking at a press conference on Friday, president Joan Laporta said: "We were all thinking for two years but if he wanted more, we could negotiate. But two years at Barca is what we all wanted. We wanted the post-Messi era to start in two years. We had to bring that forward."

Haven't we been here before?

Yes, there is a sense of deja vu to be had. Last summer Messi announced his desire to leave Barcelona on the back of their humiliating 8-2 hammering in the Champions League by Bayern Munich, and a rather public disgruntlement with manager Quique Setien, who lasted only half a season at the Nou Camp.

The Covid-19 outbreak played a major part in the dispute, as Messi's contract included an agreement he could leave on a free should he wish by the end of May, at the end of the campaign. But because of the pandemic, Barca's 2019/20 season did not finish until July - and with the club unwilling to bend their own rules, Messi stayed. 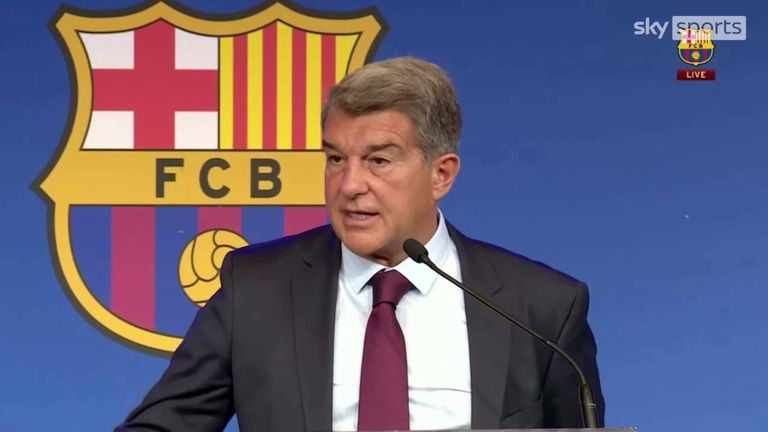 Barcelona president, Joan Laporta has played down the chances of Lionel Messi staying at the club

A year on, despite missing out again on the Champions League and La Liga titles, Messi was content to stay in Spain - and, ironically, it is the club who have pulled the plug on their time together.

Before becoming president, Laporta had promised to keep Messi at Barcelona - and had agreed terms for a new contract. But the numbers involved would have led to Barcelona breaking La Liga's Financial Fair Play rules, which they signed up to in 2011/12.

In a situation exacerbated by the pandemic, Barcelona have been struggling to reduce their wage bill in line with La Liga's rules for this coming season, and have been in talks with vice-captains Gerard Pique, Sergio Busquets and Sergi Roberto about reducing their salaries by 40 per cent in return for contract extensions.

They have also been trying to sell several high earners including Antoine Griezmann, Ousmane Dembele, Philippe Coutinho, Samuel Umtiti and Martin Braithwaite but have not yet found solutions for any of them and even free agent arrivals like Memphis Depay have commanded big contracts and signing-on fees.

Wage caps in La Liga are calculated prospectively based on a club's financial health and they must adhere to their cap in order to avoid future financial penalties. La Liga will only permit Barcelona to spend 70 per cent of their turnover on their wage bill, but Laporta stated on Friday with Messi's new contract the club would have spent 110 per cent - even with him gone, that figure remains at 95 per cent.

Laporta himself put the blame squarely at the feet of the previous regime, led by Josep Bartomeu, who resigned his position in October last year. "The base of everything is the previous administration's disastrous management which we inherited," he said. 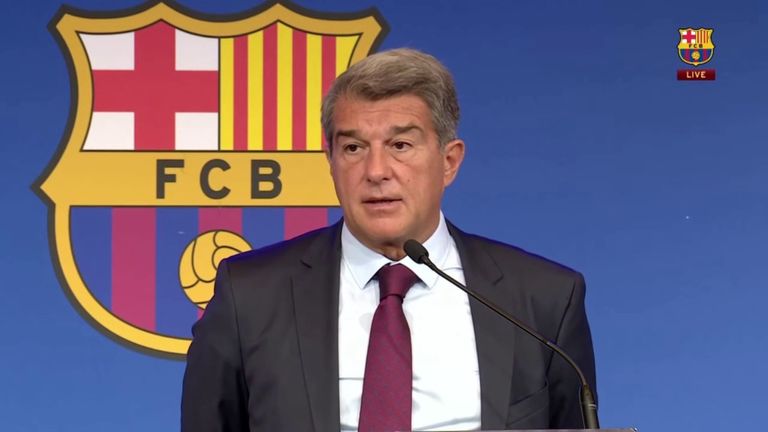 "They must have been under pressure but it led to this situation now. An investment of such volume for the contract of Messi was risky. We wanted to assume those risks but when we have realised what the real situation is after the audit, it meant we would have put the club in great risk.

"What we were counting on for Leo would have meant the salary mass would be 110 per cent of the club's income. It would not be sustainable. The salary mass has us tied right now. I am convinced we have done the best in the interests of Barcelona."

Barcelona and Real Madrid, La Liga's two biggest clubs, have always had a strained relationship with the division's president, Javier Tebas. Tensions had already risen this year on the back of the failed European Super League venture, for which only last week Tebas derided as "a bit of a joke".

Messi's contract situation has not helped matters. On Wednesday, La Liga's executive committee agreed to sell 10 per cent of the league to a global investment fund called CVC for €2.7bn, with €2.43bn of that figure distributed among the 42 clubs in the top two divisions of Spanish football - on the face of it, a welcome development given the financial situation caused by the Covid-19 pandemic.

"While other clubs are broadly in favour of the plans, Real Madrid and Barcelona do not want to 'give away 10 per cent' of their broadcast income to outside investors," Sky Sports News reporter Kaveh Solkehol said. "They are also concerned that the new money pouring in would strengthen La Liga and make their own dream of forming a super league even less likely than it appears at the moment."

Real and Barca have both made public statements against the plans, which have in turn played their part in scuppering Messi's new contract. A Real Madrid press release lambasted the agreement for signing away 10 per cent of the clubs' TV rights for a period of 50 years, while Laporta suggested on Friday La Liga would only sign off on Messi's new contract if they signed up to the CVC deal.

He said: "This negotiation has ended and brought us here without being able to formalise those agreements, because of the salary limit, and La Liga is not flexible in widening that salary limit. If they did, we would have had to accept the (CVC) operation, and we cannot affect the broadcasting rights for half a century."

So is this brinkmanship? Is there any way back?

It does not look that way. There was talk in the hours after Barcelona's initial announcement it may be a ploy to get La Liga to budge. 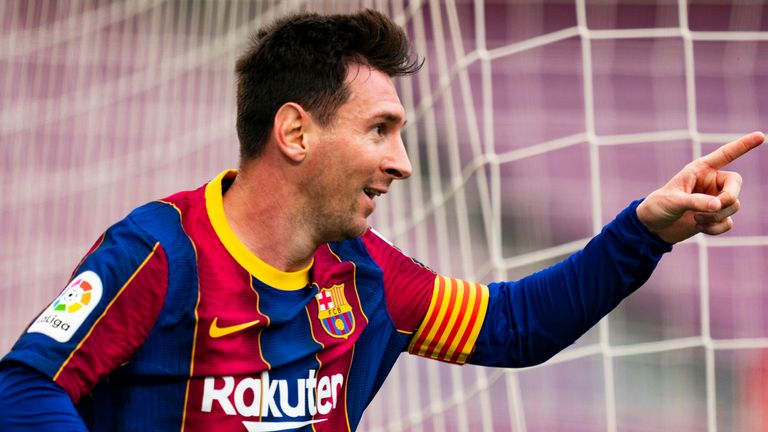 But given the ongoing wrangling with the CVC deal, and the bitterness in the aftermath of the failed European Super League project, that seems increasingly unlikely - especially when Barcelona may not even be allowed to register their new signings this summer without first reducing their wage bill further.

Perhaps there is still hope. Sky Sports News' Dharmesh Sheth told the Transfer Talk podcast: "There are two or three ways that you could look at this, whereby Messi, in fact, is still a Barcelona player, on September 1. He is now a free agent, remember that. One of those ways is to renegotiate the contract with Messi to comply with those Financial Fair Play rules that La Liga had put in place.

"Number two, try to sell some players at Barcelona in the next three weeks, or reduce everyone else's contract so you can keep Messi, or number three, hoping La Liga change its regulations to accommodate Barcelona and Lionel Messi. But something tells me that is very, very unlikely."

South American football expert Tim Vickery agrees, with almost a month remaining for Barca to get their finances in order.

"There's still a while to go in the transfer window so Barcelona still have time to try to unload players," he told Sky Sports News. "I know it's difficult in this market and I know the club has been mismanaged to an extraordinary proportion. They've spent a fortune on players that strictly speaking they don't need.

"But there are still measures they can take to improve their balance sheets and to structure a deal whereby Messi can stay. The idea of them throwing in the towel on their greatest asset at the start of August doesn't make a great deal of sense to me."

Where could Messi go?

Messi is said to be shocked by the collapse of his Barcelona deal, and "had no Plan B" ahead of finding out he would need to find a new club.

Paris Saint-Germain are already in talks with the Argentine about bringing him to Paris, to reunite with former Barcelona team-mate Neymar. PSG believe they have a good chance of completing a deal and can afford to sign him without breaking any Financial Fair Play rules. Messi still wants to win trophies and be part of a winning project and the Ligue 1 side can offer him all that.

Manager Mauricio Pochettino spoke to the media on Friday and said: "Regarding Lionel Messi, we all saw what happened yesterday.

Another reunion, with Pep Guardiola at Manchester City, seemed another possibility but the head coach, who only completed the £100m signing of Jack Grealish on Thursday, appeared to dampen any hopes of a move to the Premier League when speaking on Friday.

"Right now, it's absolutely not in our thoughts," he said. "It looks like it's finished and it was a surprise for everyone. I think president Laporta was clear today. "I didn't speak with the player or the president but both wanted the agreement to continue. All I can say is thank you to Lionel for helping Barcelona dominate and I wish him all the best for the future."

How can PSG afford to keep throwing big money around?

PSG have already signed Gianluigi Donnarumma, Sergio Ramos, Georginio Wijnaldum and Achraf Hakimi this summer, but bringing Messi to Paris would take their spending to another level.

The club has already been the subject of a UEFA investigation over its compliance with the continental-wide Financial Fair Play rules to compete in European competition, and were victorious at the Court of Arbitration for Sport in 2019. But how can they keep spending so much money?

Football finance expert Kieran Maguire told Sky Sports: "There are two potential restrictions relating to a club's ability to sign players, cash and FFP. PSG have no problems from a cash perspective, despite the collapse of the French TV deal.

"FFP wise they are broadly okay due to very lucrative sponsorship deals as well as historic progress in the Champions League which gives them a good UEFA coefficient when it comes to splitting money between clubs."