British coach Bev Priestman guided underdogs Canada to women's football gold medal at Tokyo 2020; "When I arrived back in Canada people were stopping me in the street and paying for meals, it feels like my life's changed overnight" 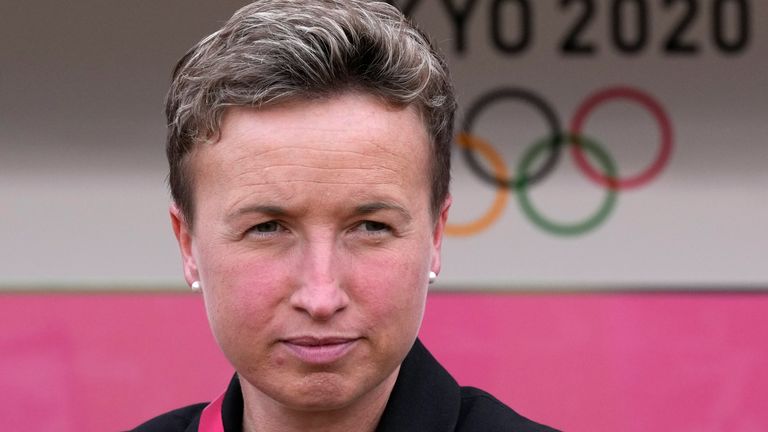 Sky Sports News reporter Anton Toloui speaks to Canada head coach Bev Priestman about her experience of winning Olympic gold at Tokyo 2020 and why she decided to leave England.

The British coach, who only took charge last October, led the bookies' underdogs to glory by beating Sweden in a dramatic penalty shootout in Tokyo after seeing off World Champions USA in the semi-finals.

"It hasn't sunk in yet," Preistman exclusively told Sky Sports.

"When I arrived back in Canada people were stopping me in the street and paying for meals, it feels like my life's changed overnight but it feels really, really good."

Canada had won bronze in the two Olympics before Tokyo but Priestman admits it was victory over USA that was the turning point for her team.

Canada's great rivals had gone 44-games unbeaten before the Olympics but Priestman felt her side could overcome the global stars of Alex Morgan, Megan Rapinoe and Sam Mewis if she could inspire her players to believe they'd be victorious.

"To be the best you've got to beat the best. US v Canada is massive, it's got a massive history. A lot of those players waited 15-20 years to beat them and I knew they (USA) weren't having a great tournament. I knew I'd get a new level out of the group and deep down in my gut I knew we would win."

Priestman took over Canada last autumn after two years of being Phil Neville's assistant with England.

She was given the role of England Under-18s head coach but left after just a month to be given the opportunity she'd been craving, the top job of an international side.

"I wanted to be a Number 1 but The FA went in a different way in finding Phil's replacement. I wanted to compete against the best teams in the world, I didn't want to be a youth coach anymore.

"I had this low as a coach where I asked "Where am I heading? What's my career path?

"I spent the pandemic reinventing myself to be ready to be a senior head coach and it just happened Canada was a great fit.

"It felt like I was coming home. I was married here, my little boy was born here so it just felt like the right time and I haven't looked back since."

"I'd had some great club opportunities but my career's been around international football. Phil was unbelievable with me, he still is. He was my biggest fan at the Olympics and I got some great motivational videos from him."

Priestman is back in Vancouver with her family ahead of the next international break, which is scheduled for September.

As well as the gold medal kept tucked away in a safe place, she's also had time to cherish memories from an eventful and successful month in Japan.

"There was a moment when we had our gold medals, cheap Japanese champagne and I had to sing a song... One Direction. I'm pretty embarrassed to admit that," Priestman recalls with a smile on her face.

"It was so late when we got back to the hotel we all saw the sun come up over the Olympic rings. It was a cool moment. But now we've got to make sure this isn't a one-off, we've got to make this happen again, again and again.

"A lot of my inspiration goes back to being a young girl in County Durham, being the only girl in the football team and doing things I shouldn't have been able to do as a female in a man's world. Perhaps Tokyo was partly inspired by that."