Cristiano Ronaldo's Manchester United return: How good is he at 36 years old and where does he fit into this team?

Is Cristiano Ronaldo still good enough to make a big impact at Old Trafford aged 36 and where does he fit into Ole Gunnar Solskjaer's Manchester United team? A look at the stats and the intrigue ahead of his anticipated Premier League return against Newcastle...

Cristiano Ronaldo has only scored one hat-trick for Manchester United. So far. It came against Newcastle at Old Trafford in 2008. Thirteen years and 57 career hat-tricks later, Ronaldo could make his comeback at the same ground against the same opposition.

But how much has changed?

That is the intrigue of Ronaldo's return.

There cannot be many players out there who have played up front alongside a manager who turns 50 next season. Perhaps United supporters will recall Ronaldo's previous Old Trafford appearance against Newcastle in 2006. Ole Gunnar Solskjaer scored twice.

Coincidentally, both of those matches helped take Manchester United back to the top of the Premier League table. If Tottenham fail to beat Crystal Palace in the early kick-off next week, Ronaldo will have the opportunity to inspire a repeat. Could he keep them there?

In answering that question, there is a balance to strike. Difficult amid the cacophony that began on social media with news of his return before echoing around the concourses of Molineux last weekend long before kick-off against Wolves. Viva Ronaldo.

It is trite to state that no player is bigger than the club - certainly not this club. But with Ronaldo it can feel a little complicated. His Twitter following dwarfs that of Manchester United by 67 million, his Instagram following stands at 336 million to United's 46 million.

He is not so much a brand as an industry. And he trades on success. Cristiano Ronaldo's hat-trick for Manchester United against Newcastle in 2008

Manchester United did win in his absence but not for long.

In the eight years since they last won the title, Ronaldo has won the Champions League on four different occasions - more times than Manchester United have made it beyond the group stage.

In that time, no player has scored 20 goals in a Premier League season for the club.

In contrast, Ronaldo has never not scored 20 league goals in any of the dozen seasons since he departed the club first time around.

We know what has changed at Manchester United.

A decade of decline in which new rivals emerged and expectations became so diminished that United could sign not only Ronaldo but also Raphael Varane and Jadon Sancho in the same summer and Gary Neville is still reluctant to talk up their title chances.

What has changed for Ronaldo will be fascinating.

He is clearly not the same player who left Old Trafford, for better and worse. At Real Madrid, he came to appear more machine than man, his 450 goals coming in 438 games.

All players love to score.

Few can claim to have the affection reciprocated.

Even now, his body still sculpted but his once irresistible pace having deserted him, the goals remain faithful. There were 29 of them in Serie A last season even as Juventus struggled and debate about his waning ability raged within the Italian media.

For Portugal in the summer, his game appeared pared back, the mobility more restricted. He now stalks matches rather than tramples all over them. But still goals gravitate towards him.

The win over Hungary illustrated it perfectly. He did very little. Then he scored. And then he scored again. The man of the match award followed and when the tournament was over, Ronaldo was its top scorer. He has distilled this game to its essence now.

That could be enough for United.

There is already pace and movement in attack. Sancho, Marcus Rashford and Mason Greenwood can provide that. There is already creativity in midfield. Bruno Fernandes and Paul Pogba have the imagination and the skill to pick out the passes that others cannot.

Aside from a holding midfielder, what they need is more of the nous that Edinson Cavani provides, the scoring instincts that, for all his qualities, continue to elude Anthony Martial.

Ronaldo has become that penalty-box poacher.

He will score lots for United.

As for his team-mates, some will be wondering whether he stifles rather than inspires on the pitch. At Juventus, even as he plundered, the team's goal return was actually lower in each of his three seasons there than it had been in the one prior to his arrival.

Despite doing his best work inside the box these days, Ronaldo also still gravitates towards that left flank, looking to cut inside from there. Given that Martial and Rashford favour that zone and Sancho started there on his full debut, difficult decisions must be made.

But his off-field influence could be significant too.

Ronaldo's dedication to his profession remains fierce, showing total commitment to making himself the best that he can be. The hope is that this will help to create a winning culture among a squad that looked a little light on trophies before Ronaldo and Varane signed.

The dressing room demographic changes and the mood with it. Even the involvement of Sir Alex Ferguson in persuading Ronaldo to return harks back to United's golden age. Nostalgia is an unavoidable part of all this at a club steeped in tradition even as it looks to the future. 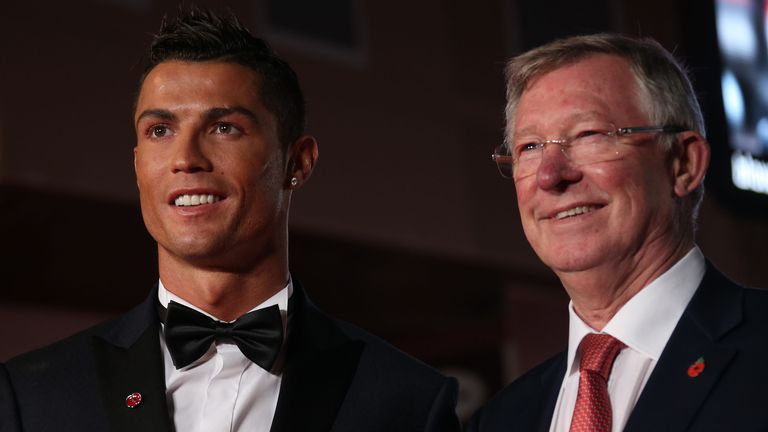 It will be everywhere against Newcastle. How good does Ronaldo need to be to justify that excitement? Even at a mere fraction of his former powers it should be enough to make a difference.

After all, he does not need to be better than the Ronaldo of old. The bar is set much lower than that. It is Martial and his insipid performance in the draw at Southampton. It is Daniel James, all energy and little finesse as the team laboured against Wolves.

How good is Ronaldo at 36? Good enough - and he knows it.

"History will be written once again," says the man himself.

There is little reason yet to doubt him.

The Essential Football Podcast takes a deep dive into Ronaldo's return to Manchester United - what must Solskjaer be wary of to make his return a success?

Free-to-watch highlights of Manchester United vs Newcastle United will be available on Sky Sports' website and App, as well as Sky Sports' Football You Tube channel, from 5.15pm on Saturday September 11