Tomori hoping to add to lone England cap won in 2019; he joined AC Milan permanently this summer after falling down the pecking order at Chelsea; Tomori says Zlatan Ibrahimovic has been a huge help to him at his new club 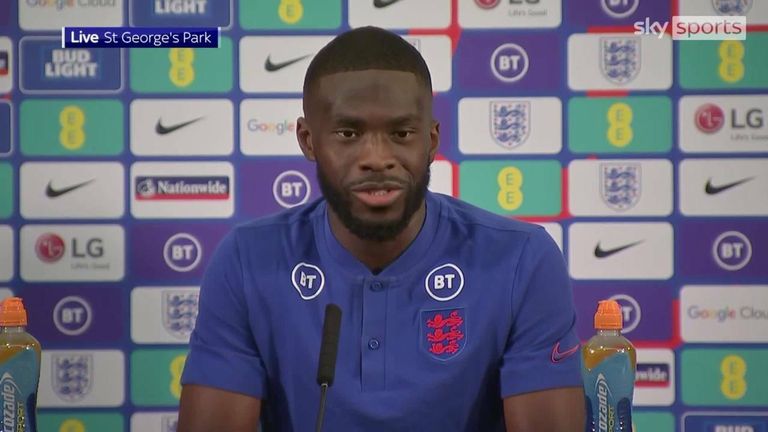 AC Milan's Fikayo Tomori has regained his spot in the England squad after getting back to his best form in Italy, but the defender admits he had to overcome some tough times at Chelsea to reach this point

Defender Fikayo Tomori is back in the England squad for the upcoming World Cup Qualifiers - and says life with AC Milan and Zlatan Ibrahimovic has helped him get his career firmly back on an upward curve.

The 23-year-old has been out of the England squad for almost two years, and his one cap came against Kosovo in a Euro 2020 qualifier back in November 2019.

He subsequently dropped out of regular contention at Chelsea but has revitalised his career with a loan move to Milan, which became permanent this summer, helping them to second in the current Serie A table.

Tomori's form in Italy has earned him a recall to the England squad and the central defender has a good chance of featuring in the upcoming qualifiers against Andorra and Hungary.

Asked about the disappointment of not featuring more for Chelsea, Tomori said: "Since I have been at Milan, I haven't really thought about it.

"When you are not able to do that it is difficult - and being able to overcome and forget about that is part of the reason why it is now going so well.

"I didn't really dwell on it and just moved on and put it as part of football, part of life.

"It feels good, to have been here and then out of it for a while, and then to be back, I am really happy.

"And now my goal is to stay here, with my performances here and back in Milan.

"Every footballer wants to play and I got the opportunity to do that at Milan - and when it came, such a big club, I was so excited and I am really happy that it has gone well so far.

"We have started the new season well and the club have shown a lot of faith in me, a lot of confidence.

"So I am really comfortable there, really settled and it's led me to be here, so it's all going really well."

Tomori also praised the impact of the 40-year-old forward Ibrahimovic on the AC Milan squad.

"There is this view of him in the media, but ever since I got there he was speaking to me, helping me with the language," said Tomori. "Telling me where he wants me to play the ball.

"He has been a really big help and has such a big aura in the dressing room.

"He is a real leader and, when he plays he gives everyone a lift - he is loved in Milan." Speaking to the media on his return to the England squad, AC Milan defender Fikayo Tomori explains the important role footballing legend Paolo Maldini has played in his development since moving to Italy

Tomori has not been in an England squad since they started taking a knee ahead of matches in a stance against racism and discrimination.

He thinks the squad's stance is having an impact and hopes things are improving.

"I definitely think it (racism) is a problem in football," he said.

"To have to worry about things like this, it isn't really fair, so making these kind of gestures does raise awareness.

"We are not going to stand for it, we are coming to play football and compete.

"There are some people who are not as educated as other people and they do silly things, but I think we are making the right steps to eradicate it.

"You see stadiums being closed and stuff, so it is moving in the right direction."