Tammy Abraham has scored four goals in 10 appearances since joining Roma from Chelsea in the summer; Ben Chilwell replaces fellow Chelsea full-back Reece James who has withdrawn due to an ankle injury; Watch free England highlights from 11pm each matchday on Sky Sports website and app 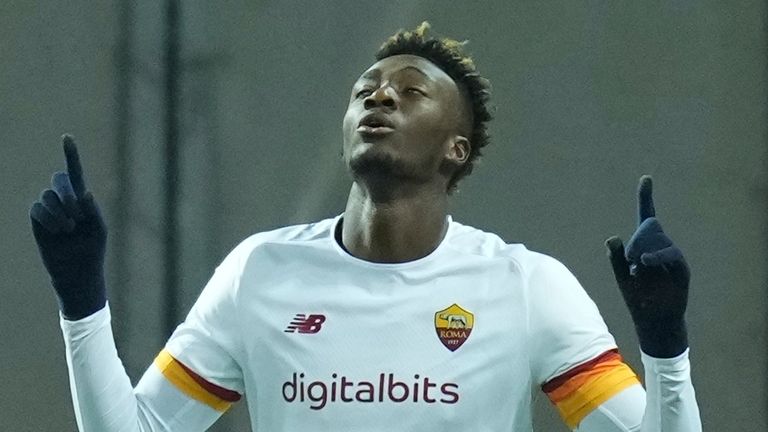 Tammy Abraham and Ben Chilwell have been called up to Gareth Southgate's England squad for the upcoming World Cup Qualifiers against Andorra and Hungary.

Roma striker Abraham has scored four goals in 10 appearances since joining the Serie A club from Chelsea in the summer.

The 24-year-old and Chelsea left-back Chilwell are additions to the 23-man squad named by Southgate on Thursday, which features strikers Harry Kane and Ollie Watkins, plus forwards Bukayo Saka, Jadon Sancho, Raheem Sterling and Jack Grealish.

Abraham was last selected by Southgate in November 2020, while he has six international caps and one goal to his name since making his senior debut in 2017.

He will link up with Southgate and the rest of the squad at St George's Park on Tuesday.

Abraham joined Roma in August for £34m on a five-year deal after finishing last season as Chelsea's joint top scorer despite falling out of favour under Thomas Tuchel. The move saw the striker team up with former Chelsea manager Jose Mourinho, who was a big factor in Abraham's decision to swap London for Rome.

"Jose the manager is very successful, he is very ambitious, very passionate and that is what I love," said Abraham.

"I am the same, but he is a manager, and I am a player. It is nice to have someone that high a calibre to be the manager of such a great team."

James has already missed the Champions League defeat to Juventus in Turin as well as Saturday's home win against Southampton.

Abraham's return to form in Rome

"Italy's Gazzetta dello Sport newspaper chimed 'the Englishman's statistics are stellar' after Abraham's contribution to Roma's 2-0 win over Empoli on Sunday finally tipped the balance in favour of Southgate giving him an England recall.

"The ex-Chelsea man did not score in that game, but he did provide an assist when his effort rebounded off the woodwork for Henrikh Mkhitaryan to slot home. That was the sixth time Abraham has been denied by the goal frame since he joined the club in the summer, in addition to the four goals he has contributed.

"Southgate will be pleased by his goal - and near miss - tally, as well as his contribution further back on the pitch. In addition to his finishing, Abraham is creating more chances for others than in his two full seasons at Chelsea, and as his heat map shows, he is more involved outside the box.

"There has even been evidence of some vintage Mourinho confidence boosting from a manager very pleased with his new arrival. 'There are some strikers who can be the best on the pitch even without scoring, that's exactly how it went against Empoli for Tammy,' he said ahead of the 24-year-old's England recall.

"Longer term, displacing Harry Kane on the international stage will prove an obvious struggle for Abraham. For now at least, his Italian job is paying dividends."

Southgate wants Manchester City playmaker Jack Grealish to break his international duck and join England's other attackers in bringing goals to the side.

The 26-year-old became a fan favourite during the Three Lions' run to the Euro 2020 final, with City paying Aston Villa a British record £100m for his services shortly after the tournament.

Qualifiers against Andorra and Hungary await and Southgate hopes the 15-cap international will this month finally score his first goal for his country.

"I think he recognised with us we asked certain things of him, in terms of when he first joined us, the pressing," Southgate said of Grealish, who made his senior debut in September 2020.

"I think the big challenge with us is he's 15 games without a goal, so the big challenge is to start registering those numbers that our other wide players have been able to produce over a period of time. There's no reason he can't do that.

"When we had him at the end of the season, he was only able to train two days in every three, so completely different situation to the European Championships, that's for sure."