Ahead of Brentford's Super Sunday clash with Everton, live on Sky Sports, defender Zanka reflects on how his understanding of inclusion has grown in tandem with the history of Rainbow Laces, with the campaign's annual activation an important time of year for the club's LGBTQ+ fans group

By Jon Holmes and James Green 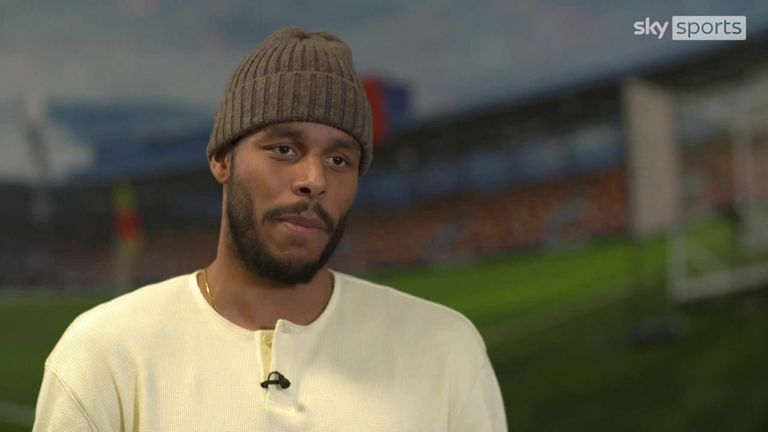 Brentford defender Zanka says his own understanding of the impact of language has shifted since the Rainbow Laces campaign has been in existence.

The Denmark international, who joined the Premier League newcomers on a one-year deal in September, was a strong supporter of the LGBTQ+ inclusion initiative during his previous spell in England with Huddersfield.

The Bees will again show their support for Rainbow Laces during the Super Sunday home game against Everton, with Premier League, EFL and Premiership Rugby clubs kicking off the sports-wide annual activation which runs until December 12.

The campaign began life back in 2013 when it was aimed squarely at professional footballers in the men's game, asking them to wear the laces to show support for any fellow players who are gay and who might be struggling with their sexuality.

It's good that all of us - fans, players, staff, everybody - come together around a cause that was really overlooked for a few years before the campaign started.

At the time, Zanka was 24 and on the books of PSV Eindhoven. Speaking to Sky Sports, he explained how he would sometimes use the word 'gay' as a pejorative term back then, but quickly stopped when he understood about the negative impact it might have.

"I remember growing up, I used to use the word," he explained. "I didn't actually comprehend what I was saying or that it could be hurtful to anybody.

"I didn't mean it in that way, but it's more because I didn't think. If you feel something is 'gay', you're actually trying to say it's not strong - so it has a negative meaning.

"I was 24 before I started thinking that when I actually said that - if I'm with my friend and something goes wrong - why do you use that word in that context when it has nothing to do with what the word actually means?"

His honest reflection is in keeping with the campaign's 2021 theme of 'Lace Up and Speak Up' - a request from the equality charity Stonewall for those in sport to not just consider wearing laces but to also take part in conversations that help to make sports spaces more inclusive.

Zanka believes it is a message that encapsulates "the essence of football" as being a community game for everyone to enjoy, in which people feel truly welcome and comfortable to be themselves.

"It's good that all of us - fans, players, staff, everybody - come together around a cause that was really overlooked for a few years before the campaign started," he added.

"But with these kinds of problems, it takes a while for people to catch up, and football is always a few years behind.

"There was going to come a point when we said, OK, we in football need to take this stance as well, because sports grounds around the world are actually one of the places where you hear most of these words being used.

"That's really unfortunate because football is supposed to bring people together and not alienate them."

Brentford head into this weekend's match in mid-table after a five-game run without a victory in the league, but they would climb above Everton should they return to winning ways.

Zanka scored his first Bees goal in the defeat by Leicester a month ago but in the subsequent home game, he sustained a knee injury which boss Thomas Frank admits is likely to keep him out again on Sunday.

However, he feels a strong sense of responsibility to contribute to the occasion in a very different way - by using his voice to talk about inclusion.

"That's one of the extra bonuses with this job, that you can actually be an advocate for good," he said.

"If I can get a few more people on board, that will have a positive effect.

"Football, especially over here in the UK, has had an image down the years of being a toxic environment - very masculine, very male-dominated. That is obviously something the Premier League is trying to do a lot about.

"For us as football players and people that love football, the sport has been my entire life, growing up in community football and then transitioning into the professional game.

"I feel a bit embarrassed not to have done a little more to change the environment I'm in."

'Our banner says, we're here for you'

Like the majority of professional clubs in the Premier League and EFL, Brentford have a fans group for LGBTQ+ people and allies.

LGBeeTs began life back in August 2016 and co-founder Gemma Teale says the club has always been supportive and co-operative.

"Brentford have always been keen, right from when we formed," she told Sky Sports. "They got in contact with us, and brought us in to sit on their diversity working group. They have been super welcoming and responsive."

Tomorrow's game will be dedicated to the Rainbow Laces campaign

One aspect of the campaign that has shifted relates to the laces themselves, with modern boots increasingly laceless. Zanka is among those Premier League footballers who may not be visible supporters of the campaign on the pitch but are vocal about inclusion off it.

"The laces very rarely get worn by players," says Teale. "When nothing else was happening, that was a real source of frustration.

"However, while they still might not get worn so much, we're now seeing players getting interviewed about the campaign and fans like me are getting to talk about it too. It's transformative in that way."

The LGBeeTs banner is proudly displayed at the Brentford Community Stadium on matchdays and Teale says it continues to send out a welcoming message.

"If there are any gay or bi players, the banner says 'we're here for you' and I think that's important," she adds.

"One of the reasons we formed a group is that when you love football, it's your happy place - it's a huge part of your life.

"When you hear things like homophobic comments at a game, it suggests that the stadium isn't for you, that you don't belong there, that you're less than others.

"When you get those daggers of 'no, you don't belong', it's horrible and hurtful."

So great to have a player so willing and happy to engage with #RainbowLaces and fighting LGBTQIA+ discrimination. Thanks @mzanka 🐝 https://t.co/XjT6bcXAkz

Having allies like Zanka is hugely valuable, says Teale, and while the Dane is appreciative of that, he wants more players to demonstrate that they can be role models too, especially for younger fans.

"If their hero says something, that helps, and obviously they adapt that attitude as well," he says.

"But I don't think that's the most important thing - it's actually that I'm sitting here, and instead of discussing a topic about whether it's better to be right or left footed, or if I prefer to play left or right side centre-back, we're actually talking about something that means a little bit more than football.

"For me, education is the key to all this."