Ref Watch: Dermot Gallagher gives verdict on whether Scott McTominay was lucky to escape a red card vs Leeds

Scott McTominay committed six fouls during Manchester United's win at Leeds but only received a caution, plus was Cristian Romero unlucky to be penalised for handball in the box? Dermot Gallagher has his say on the latest Ref Watch... Dermot Gallagher dissects the big flashpoints from the weekend's action and felt Scott McTominay walked a tightrope against Leeds but was right not to be sent off...

INCIDENT: Leeds United defender Robin Koch suffered a blow to the head in a collision with Manchester United's Scott McTominay. The Scotland international escaped a yellow card but would later be cautioned following an accumulation of fouls. Was McTominay fortunate to avoid a red card?

VERDICT: Not enough to warrant a second yellow card.

DERMOT SAYS: I thought the referee Paul Tierney dealt with this situation and other similar situations in this game really well. The yellow card procedure is as follows: is a challenge just a foul with no further action needed? Is it a foul with further admonishment? Or is something a foul with a yellow card?

In situations like this, Mark Clattenburg was an expert in knowing when two fouls could be paired up to equal a red. But McTominay never then committed what was then an out-and-out second yellow card. He was chipping away, but Mark was really good at telling a player to stop. It meant that whatever happened on the next foul, the player would be sent off. The referees do this well now. 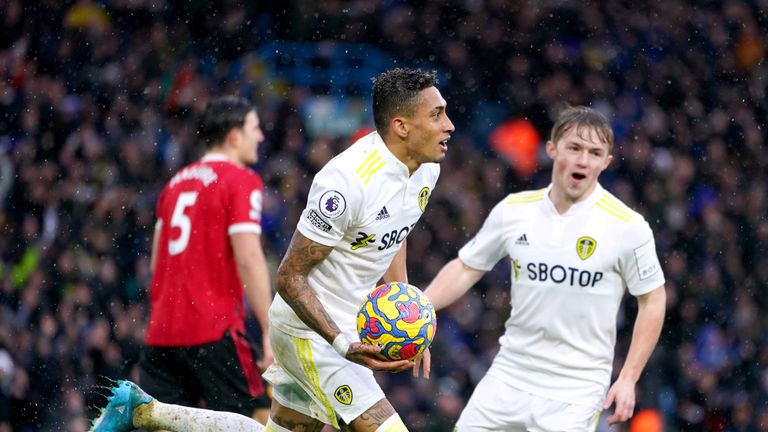 Leeds United scored twice in a minute against fierce rivals Manchester United thanks to Rodrigo and Raphinha, sparking wild celebrations at Elland Road as the home side made it 2-2

INCIDENT: Leeds scored two goals in the space of 24 seconds to level the contest at 2-2 but should Raphinha's equaliser have been allowed to stand? There was a brief VAR check after Bruno Fernandes claimed he was fouled by Adam Forshaw in the build-up, but the on-field decision of goal was upheld. 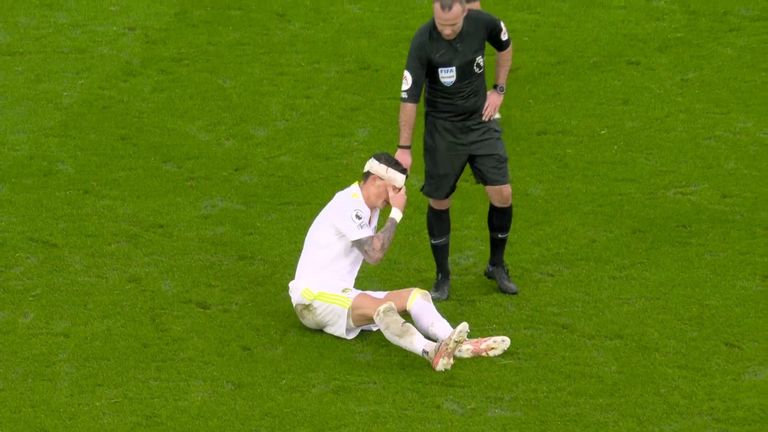 Leeds have stated Robin Koch passed all on-field concussion tests yesterday, and will follow all concussion protocols before returning.

They say: "Leeds United can confirm that following a clash of heads, Robin Koch passed all of the on-field concussion screening tests that are currently part of the Premier League protocols.

"The player was told if he developed any symptoms he should sit down on the field of play and would be substituted immediately, which is what Robin did in the 29th minute of the game.

"The medical staff at Leeds United have always been in favour of temporary substitutions for head injuries, as it would allow the staff more time to assess an injury and allow a period for symptoms to potentially develop.

"Robin will follow the concussion protocols before returning to play."

Dermot Gallagher: "It's all about trust in these situations. The referee really has to trust the doctor and the people who assess the player and it's all down to them as they're the experts.

"The referee is only really there to be informed. Paul Tierney was informed that the player was alright to continue so he can't really go against that.

"I, like the current referees, can only take the guidance off the experts. The current protocols are there to be adhered to and Leeds will say they adhered to them. The referee can't do much else."

Stephen Warnock: "You have to take the decision out of the players' hands. That's the big thing for me. All players don't want to come off the pitch in a game against Manchester United at a bouncing Elland Road in a game that they know they have to get something out of.

"The player is never going to say that he wants to leave the pitch. That's where the doctors and the physios have got to be strong enough to say they're coming off.

"You could visibly see he could barely walk off the pitch. You wondering how you get yourself into that sort of situation. It's all about the safety of the player." 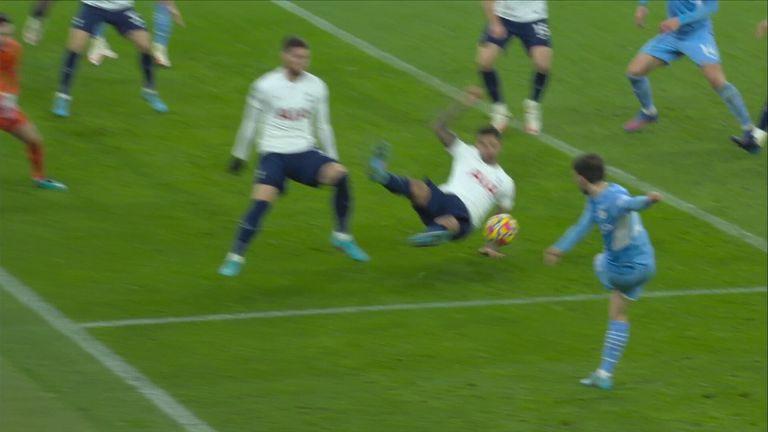 INCIDENT: Man City had valid claims for a penalty when Bernardo Silva's low cross slammed into the arm of the diving Cristian Romero and after VAR Darren England instructed referee Anthony Taylor to consult his pitchside monitor, City were handed a dramatic reprieve in the second minute of second-half stoppage time.

DERMOT SAYS: This is absolutely the right call. You can see that the arm is up and it's above the head. People will argue that he's on the ground but even if he was stood up and his arm was in that position then it's still above his head. The arm isn't supporting itself... it's blocked a cross so it's a penalty. 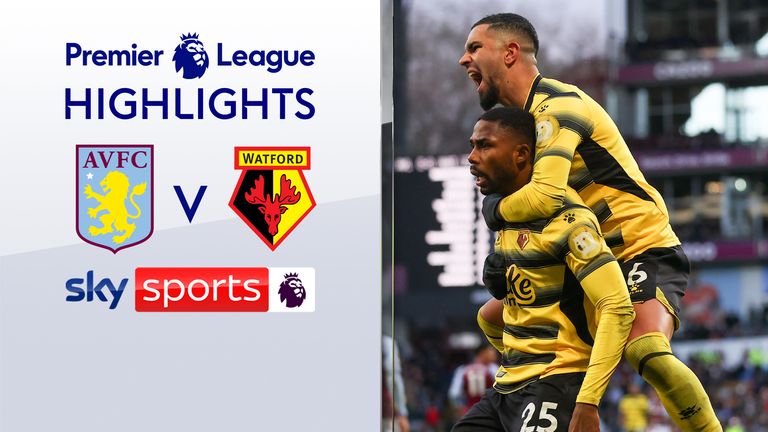 FREE TO WATCH: Highlights from Watford's win at Aston Villa

INCIDENT: Aston Villa wanted a penalty for a challenge on Danny Ings by defender Samir inside the opening couple of minutes but referee Robert Jones waved away the protests.

VERDICT: Stick with on-field decision. Not enough for VAR to over-rule initial call.

DERMOT SAYS: I think this one is debateable as it's a really clumsy challenge from the defender. Ings does really well to get his body in the way of Samir and the ball. The defender would be well advised not to make a challenge but there's such a tangle that it's an on-field decision. Does he play the ball or does he nudge him in the back? The VAR has to be guided by the referee. 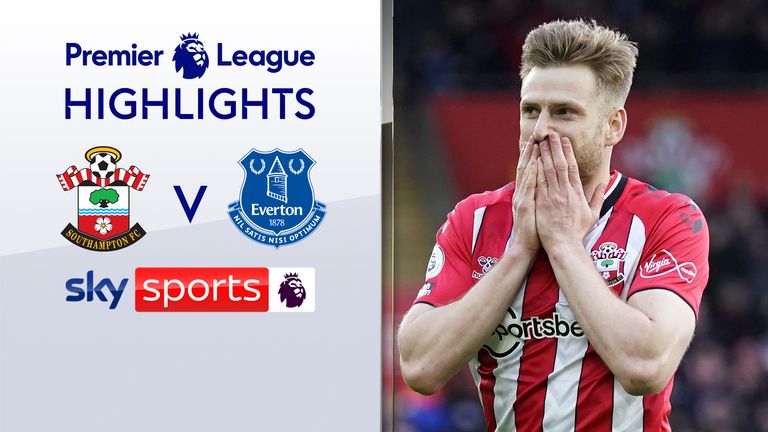 FREE TO WATCH: Highlights of Southampton's win over Everton

INCIDENT: Everton felt they ought to have been awarded a penalty early into their 2-0 defeat at St Mary's when Seamus Coleman's cross appeared to strike Oriol Romeu's arm inside the box.

VERDICT: 50-50 call. I would just about back the referee.

DERMOT SAYS: I thought he was pulling his arm away. People see this differently with some saying his arm is out. I think his arm is out but he does pull it away. It does strike him, there's no doubt about that but it's one where some referees would give a penalty and others wouldn't. 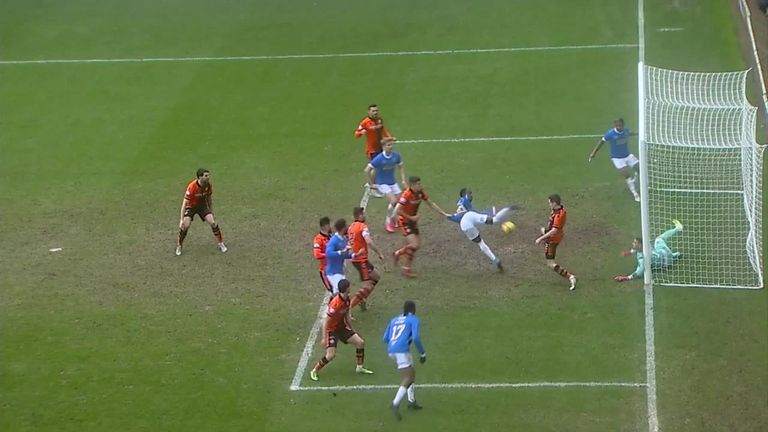 INCIDENT: Sky Sports pundits Kris Boyd and James McFadden were at odds over a controversial penalty decision at Tannadice.

Rangers players thought they should have been awarded a spot-kick after Charlie Mulgrew's clearance appeared to strike the arm of team-mate Ross Graham. Referee Bobby Madden waved play on but replays clearly show the ball hitting the arm of United star Graham inside the box.

VERDICT: Not a clear and obvious error.

DERMOT SAYS: The referee must have felt the ball has come off his own player and has struck his arm but he didn't consider that it's struck an outstretched arm. I'm not so sure that this should have been a penalty.

INCIDENT: Ross Graham later dragged down Fashion Sakala during the second half of Dundee United's draw with Rangers. 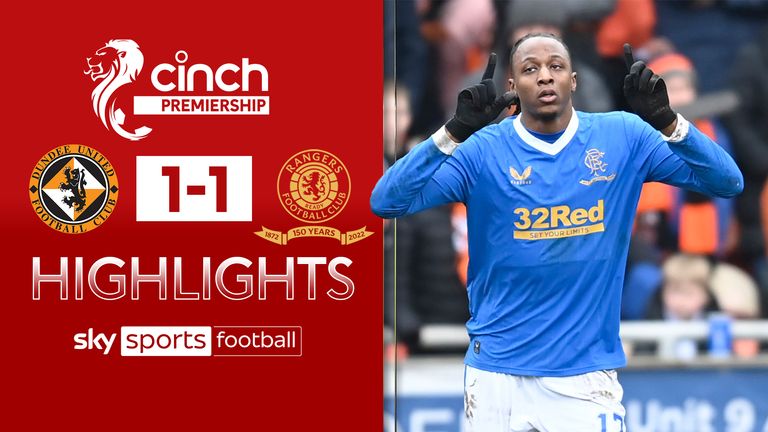 The incident happened while Rangers were 1-0 down and Sakala was presented with the ball two yards out after a brilliant save from Benjamin Siegrist.

Before the Zambia forward could put the ball in the net he was dragged to the ground by Graham but referee Bobby Madden nor his assistants spotted it.

DERMOT SAYS: I think this is a penalty. I the referee gives a penalty it also a red card, he grabs so much of his shirt, he is just about there to kick it into the net, so if the penalty was given, which I think it should have been, it would also be a red card.