Spain crashed out of the World Cup on penalties against Morocco; Luis Enrique's side once again dominated possession but could not make it count, the early exit raising questions of their identity; "World Cup too big for us," read Marca's front page on Wednesday morning

More than 1,000 passes and only one shot on target.

On a dismal, deflating night for Spain, a night which saw the 2010 winners fail to reach the quarter-finals of a third consecutive World Cup, that was the statistic that best summed it all up.

Spain promised plenty but, ultimately, and not for the first time in recent years, they delivered little, their fate sealed, again, on penalties. Three taken; three missed. Morocco, outstanding throughout, deserved their win. Spain got what they deserved too.

The issues are familiar ones. The Spain side that so dominated the international game between 2008 and 2012, winning three consecutive major tournaments, were successful because they knew how to make their possession count. Not this one.

They exit the tournament having had 77 per cent possession but fewer shots than South Korea and Senegal. They scored nine goals but seven of them came in the opening game against Costa Rica.

Sky Sports pundit Gary Neville was ridiculed for saying there wasn't enough firepower in the team in the build-up to that game at Al Thumama Stadium but in the end he has been proven right.

That, though, is not all Spain lacked.

For all the technical quality in the team, for all the youthful brilliance of Gavi and Pedri ahead of Sergio Busquets in midfield, they struggled to create chances as well as finish them.

Against Germany, Japan and Morocco, they registered a combined total of only 2.59 expected goals. Across all four games, in over seven hours of football, no Spain player created more than five chances.

Alvaro Morata is not the answer up front, but he does at least finish the tournament having scored three goals. Their much-maligned striker can reasonably argue he did his part. Others cannot.

Not that Pedri and Gavi should be held responsible. The scrutiny is better directed at manager Luis Enrique, who will surely feel he put too much pressure on the young pair's shoulders.

He had tried to ease that pressure on the eve of the game. "Nervous about tomorrow, but why?" he said with a shrug, responding to a supporter's comment over streaming platform Twitch, as he had throughout the tournament.

He was eager to project calm - "we are relaxed, confident, and excited for the game to start," he added - but it did not transmit to his players. Not after what happened against Japan - and not with all the scars they still bear from previous tournaments.

Against Morocco, the doubts manifested in a lack of composure which could be seen in Jordi Alba passing the ball straight out of play; in Busquets and Rodri, usually faultless in possession, taking turns to give it away in their own half in the space of a minute.

Morocco deserve huge credit for the way they unsettled them, of course. They knew Spain's vulnerabilities and executed their gameplan brilliantly - albeit without scoring the winner their performance deserved before the shootout.

But ultimately Spain must look at themselves.

The front pages of the country's sports newspapers had carried similar messages on the morning of the game. "Play and get through," read that of AS. "Attack!" read Sport's. 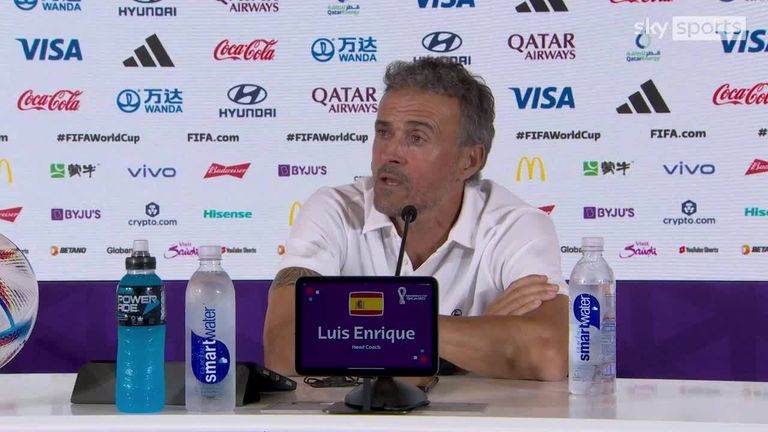 All of them were reflecting Luis Enrique's comments that Spain would stay true to their philosophy, despite the defeat to Japan in their final group game. "The national team swears allegiance to its style," added AS. "It is my idea," said Luis Enrique, "and it is what has got us here."

In the end, though, that devotion to their way of play, to monopolising possession and seeking to suffocate opponents slowly, was made to look more like a hindrance than a badge of honour.

Against Morocco, as they shuttled the ball from one side of the pitch to the other and their opponents sat back and waited to spring forward on the break, it was clear Spain were crying out for something different.

In fact, it was only after the introduction of Nico Williams in the 75th minute that they finally began to threaten, the 20-year-old's directness, his willingness to take defenders on, bringing the element of unpredictability they had sorely lacked.

By then, though, it was too late.

Morocco, emboldened by all that had gone before, never really looked like letting the game slip and could have won it without the need for penalties had substitute Walid Cheddira been more clinical.

Luis Enrique had spoken of asking his players to take "1,000 penalties" in preparation for the tournament but by the time the shootout arrived, all belief had been lost.

Spain, beaten on penalties by Italy at last year's Euros, suffered the same fate as Pablo Sarabia, Carlos Soler and, finally, Busquets, in what might be his final appearance, were all denied.

As Morocco began their celebrations, Spain were left nursing their wounds again. Another tournament which promised much but delivered little. And an identity crisis which rumbles on.

'Spain exit by the back door'

The reaction of the Spanish press was predictably brutal, with Madrid-based Marca carrying the front-page headline, "the World Cup is too big for us" and labelling their elimination a "fiasco". 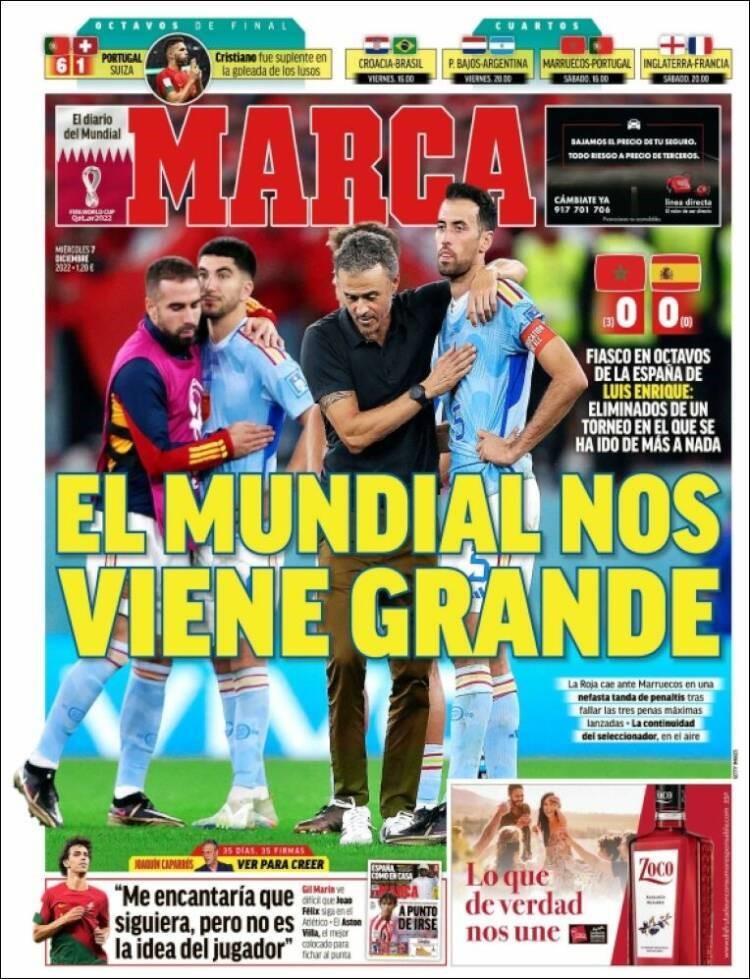 Luis Enrique's side, they continue, have been "eliminated from a tournament in which they went from something to nothing" having won 7-0 in their opening group game.

"That's that," reads the front page of AS, beneath an image of Luis Enrique, whose future in charge of the national team is uncertain, holding his hands behind his head. "A feast of possession but no finishing," they add. 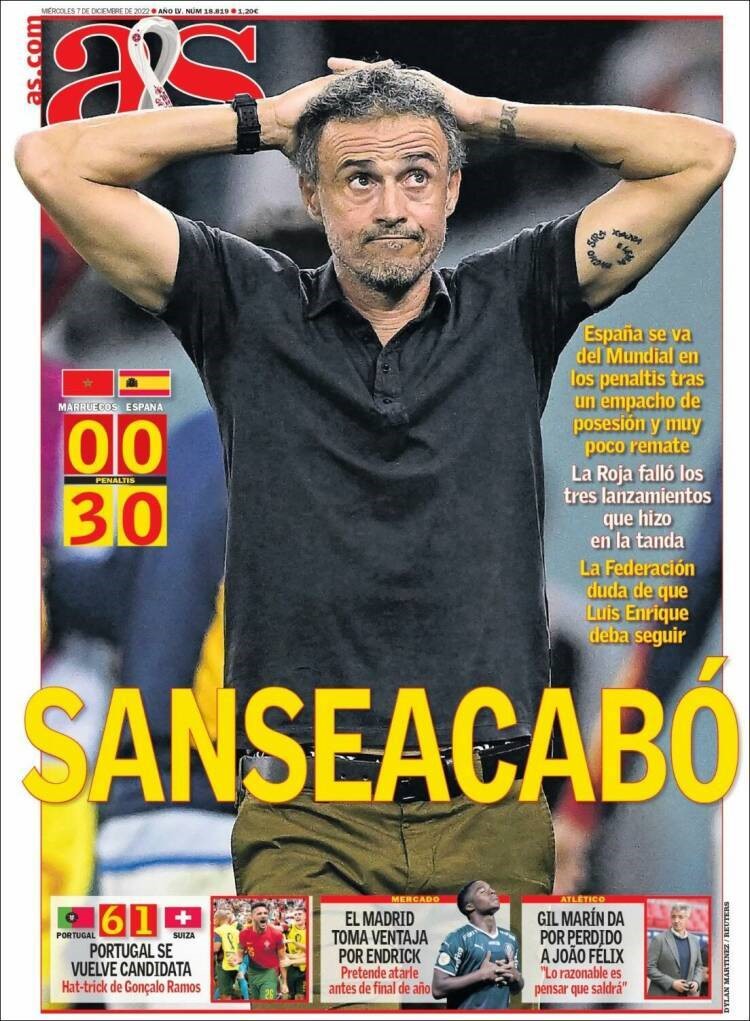 The Barcelona-based press were not quite as harsh, perhaps because of the manager's links to the club and the proliferation of Barca players in the squad.

"World Cup KO," reads the headline on Mundo Deportivo. Luis Enrique's side, they say, were "incapable of piercing the strong Moroccan defence". 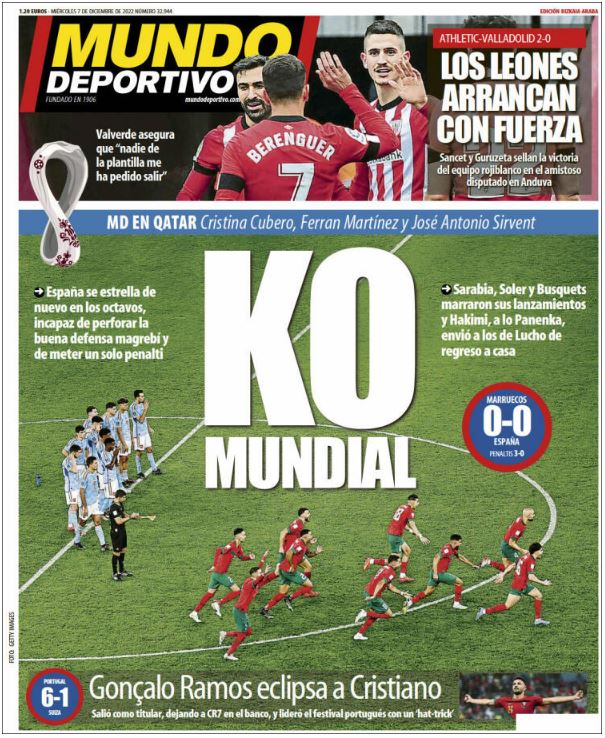 Sport, meanwhile, point to bad luck. "Damn post!" reads their front page, a reference to the woodwork twice denying Pablo Sarabia, once at the end of extra time and again in the shootout. 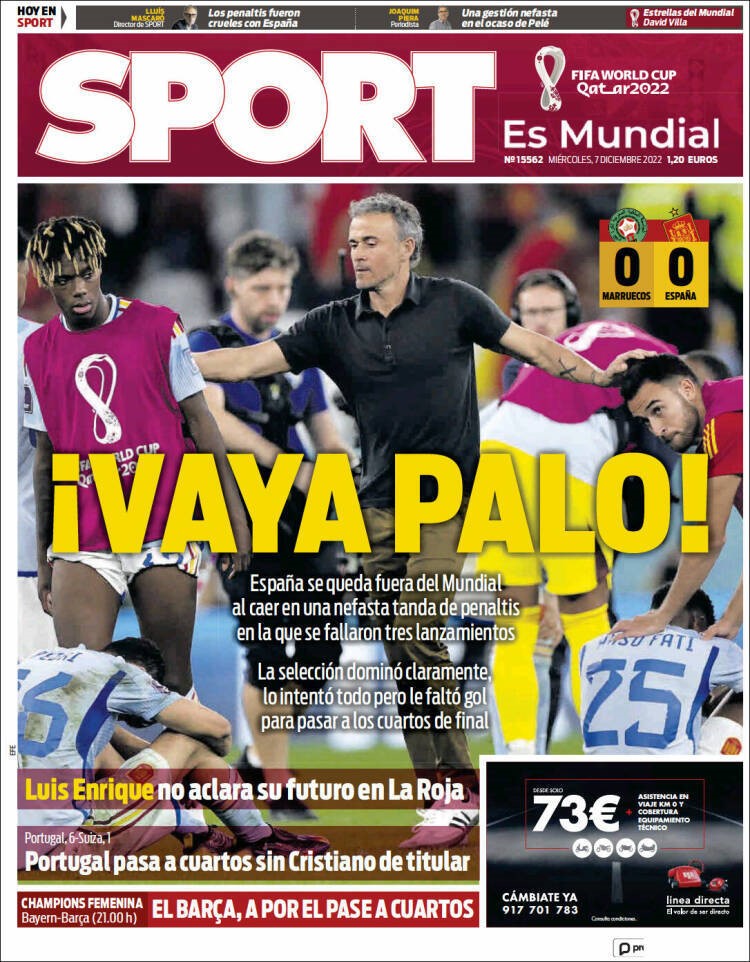 "The selección clearly dominated, they tried everything, but they lacked the goal to get to the quarter-finals," they add. 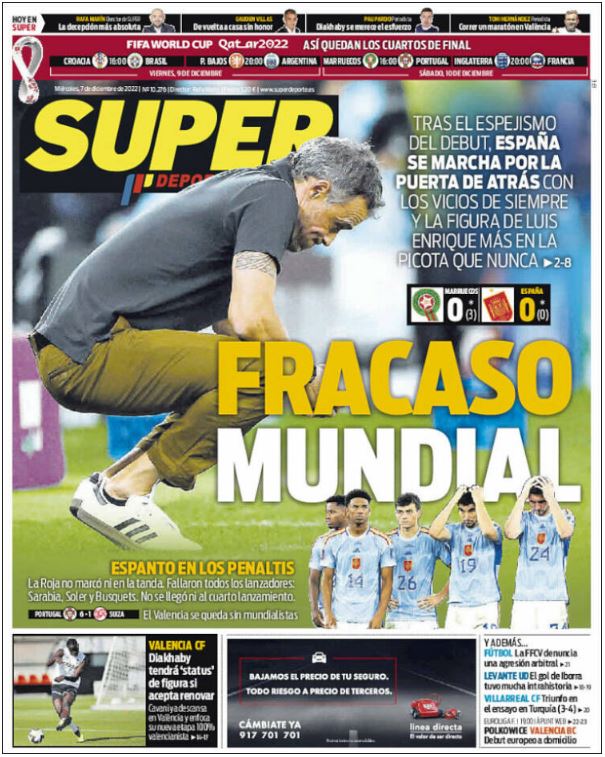 "After the illusion of the first game," they add, "Spain exit by the back door with the same bad habits as always."