Brighton head coach Roberto Di Zerbi on his style: "In my opinion the most important is to have the ball, to try in the right conditions to win the game. But always with my team having the ball"; watch Brighton vs Tottenham on Sky Sports Premier League from 5pm on Saturday; kick-off 5.30pm

Roberto De Zerbi is a man of detail. Brighton's 3-3 draw at Liverpool in his first game in charge illustrated that, whether it was seizing on opposition mistakes or carefully picking their way through the hosts with precise passing.

Next for De Zerbi is a contemporary from Italy as Antonio Conte brings Tottenham to the Amex Stadium. The detail for the new head coach extends to the last time he faced Saturday's opposing manager.

Eighteen months ago, his Sassuolo team were beaten 2-1 at the San Siro by Conte's table-topping Inter side - but De Zerbi still remembers what should have happened. "There was a clear penalty," he said with a smile almost as though he has been thinking about that moment ever since. "You forget an important detail. 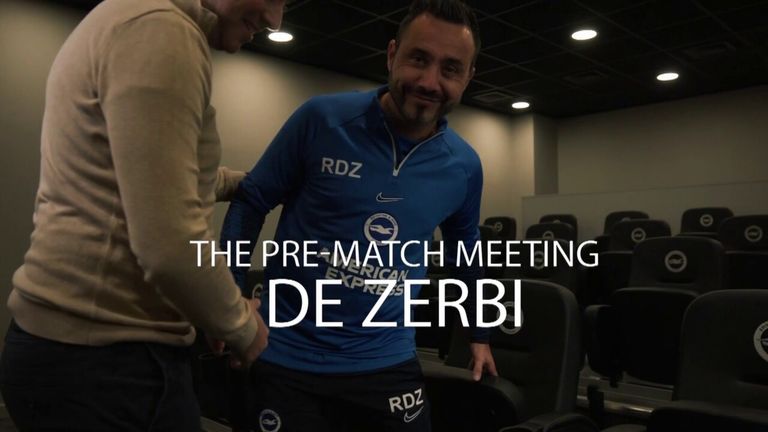 "But the Inter of Conte was a very very great team. Sassuolo was a not-so-big team like Inter but with Sassuolo we won against Roma, against Napoli and against Inter in the first year."

The defeat in Milan was, in some ways, the epitome of De Zerbi. His team had an extraordinary pass completion rate of 95 per cent while Inter, at 30 per cent, recorded their lowest overall possession since Opta began collecting data in 2004/05.

It led to some Italian media labelling De Zerbi as a succession of Pep Guardiola, while Conte's tactics in that game were labelled pragmatic, almost 'Mourinho-like'.

FREE TO WATCH: Highlights from Liverpool's draw against Brighton in the Premier League.

It may seem contradictory then that De Zerbi sees both Guardiola and Conte as two of his managerial inspirations. "I think Guardiola is, for me, the best coach in all time no?" he says. "I remember his Barcelona, they changed the vision of football, in Bayern Munich it was amazing and the same now at City.

"But there are many other coaches I watch and understand, [Marcelo] Bielsa is one of them and Antonio Conte is, for me, one of the best Italian coaches. [Zdenek] Zeman was a great great coach - but you have to build your own clear idea, you cannot make the same work."

Not content with labelling De Zerbi as an heir to the Manchester City manager, Italian media also came up with an 'etichetta' for Sassuolo's style - 'De Zerbismo'.

However, the head coach isn't interested in a moniker for Brighton. "I do not accept 'De Zerbismo', but if you ask me if I have a clear idea in my head on my football style, I would answer yes because I think I have in my head clearly what I want to do, what I want my team to play," he says.

This idea from the Italian was forged well before he went through the country's famed coaching school Coverciano, with notable alumni including Roberto Mancini, Antonio Conte and Carlo Ancelotti. Since leaving Shakhtar in July, during the suspension of the Ukrainian Premier League, he's been back to the foothills of Florence to help the next generation of coaches, been given the Enzo Bearzot Award for Italy's best coach, and earlier this year he went to Barcelona to present to the Nou Camp hierarchy.

"In Coverciano I learned a lot of things - in my opinion the most important is to have the ball, to try in the right conditions to win the game. But always with my team, having the ball," he says. "Barcelona has another mentality, another vision of football and it was a meeting with them, with the Barcelona coaches to explain my idea. But I didn't want to be teacher, I explained my idea and we discussed it but no more."

De Zerbi's English has improved dramatically since his first meeting with the media just over two weeks ago, and he's hoping to be fluent by the new year. However, there will be a distinctly Italian feel to the touchline this weekend as he gets ready to face Conte again, a manager he's yet to beat on four previous occasions.

Their teams have shared 19 goals across those matches, meaning we are likely to see more celebrations on the touchline this weekend. De Zerbi almost broke into a jig when Leandro Trossard scored Brighton's third at Anfield while Conte is known for a vibrant reaction to his team finding the net. Who does the better celebrations?

De Zerbi breaks into a smile, "Antonio is a passionate coach like me but I think a bit more... Me."