Should David Luiz and Moussa Sissoko have seen red? Were Danny Rose and Erik Lamela lucky not to be sent off? Ref Watch is back to debate another selection of controversial decisions from some of the weekend's Premier League matches.

Former top-flight official Dermot Gallagher has been in the Sky Sports News HQ studio to analyse a number of contentious calls from weekend.

From potential red cards to offside goals and even twerking, we have it all covered in this week's edition.

INCIDENT: David Luiz is booked for a tackle on Marouane Fellaini.

SCENARIO: Luiz only shown yellow even though the challenge was with his studs and caught Fellaini on his knee.

Should David Luiz have seen red?

DERMOT SAYS: If the referee sees the angle we have seen, he would definitely show a red card because he has shown six studs, caught him high on the knee and the ball has gone. Martin Atkinson is the other side and has seen the high boot. He thought he caught him, but didn't see the seriousness. I thought it was a red card. If you go in that high with studs showing, you run that risk.

INCIDENT: Pedro booked for celebrating in the crowd after scoring.

SCENARIO: Having given Chelsea the lead after just 30 seconds, Pedro jumps into the crowd to celebrate and is shown a yellow card.

DERMOT SAYS: You have this mandate that if you enter the crowd, the referees are now duty bound to issue a yellow because of the danger of people coming forward. They don't want to do it but they have to do it. It's the worst start for a referee, a player booked after one minute.

SCENARIO: With the ball out of play, Sissoko catches Arter with an elbow to the face. The referee appears to have a good view of the situation but does not take any action. Sissoko has since been charged with violent conduct by the FA. 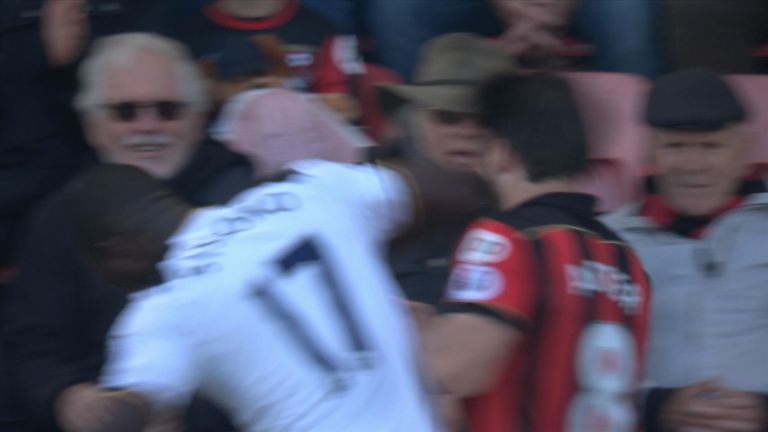 DERMOT SAYS: If the referee hasn't seen it then it's best to take no action than go halfway and issue a yellow card and close the door. The fact he has said he has seen nothing allows the FA to follow the procedure. Seeing it and recognising it is two different things. He has seen the players clash and hasn't seen Sissoko elbow Arter in the eye.

INCIDENT: Erik Lamela not shown a second yellow card for a lunging tackle.

SCENARIO: Having already been booked, Lamela is not sent off for a foul on Dan Gosling.

DERMOT SAYS: It's not a particularly bad tackle. He actually plays the ball one-footed. We have to be careful. Just because a player has a yellow card, you have to understand that the next tackle isn't going to be a red. There is a stepping process and it still counts when you are on a yellow card. It's a myth that if a player is on a yellow then the next tackle he is going to go. If you send a player off for that, you have set the tolerance so low that any tackle after that is going to be a yellow card. You need to have a balance and that's a balance for me.

SCENARIO: Like Lamela, Rose is already booked and gets away without a red card after fouling Josh King.

SCENARIO: When Reid hits his shot from outside the box, a West Ham player appears to be in an offside position and in front of the goalkeeper. Sunderland manager David Moyes says it was offside.

DERMOT SAYS: I would never in a million years be an assistant referee because I would never have got this right. It looks clearly offside, but he is not. Cheikhou Kouyate is offside but that doesn't impact play. The shot comes in, Jonathan Calleri is onside, and it's an amazing decision by Keith Stroud, who stepped in only an hour before kick-off to be the assistant.

INCIDENT: John Stones has goal ruled out for offside.

SCENARIO: Stones heads in from free-kick but it's disallowed for offside against Sergio Aguero at the near post.

DERMOT SAYS: I thought it was big mistake on first viewing but seeing the replay all credit to the assistant Simon Bennett, because Aguero is offside and he goes to flick the ball. Stones was onside but the call is absolutely spot on.

INCIDENT: Xherdan Shaqiri booked after the final whistle for clashing with Sam Clucas.

SCENARIO: Shaqiri pushes Clucas and then grabs him around the throat, but is only shown a yellow card.

Tensions rose at full-time between Hull and Stoke. But should Shaqiri have been sent off?

DERMOT SAYS: Without doubt he is running a risk. If it's considered with malice, excessive force or violent conduct he runs the risk of a red card. The nearest person to him is the assistant referee and he has got to make that judgement. He has said no, but he is lucky. I would be surprised if any referee sees a player put a hand on another player's throat and doesn't issue a red card.

INCIDENT: Scott Arfield is booked and then avoids a red card after two further fouls.

SCENARIO: Arfield fouls Gareth Barry twice and does not get booked. He then goes on to score Burnley's winner.

Arfield committed two fouls after being booked, then scored the winner

DERMOT SAYS: This is interesting because earlier I spoke about the stepping process. The referee called Ben Mee - who must have been charged with hearing these decisions with the captain Tom Heaton in goal - and it's good that everybody can see now that the referee has taken action with a warning. The second one is a nothing foul, just a foul.

INCIDENT: Kei Kamara is booked for twerking after scoring.

SCENARIO: Kamara scores, twerks, and gets shown a yellow card.

Kei Kamara was booked for twerking after scoring