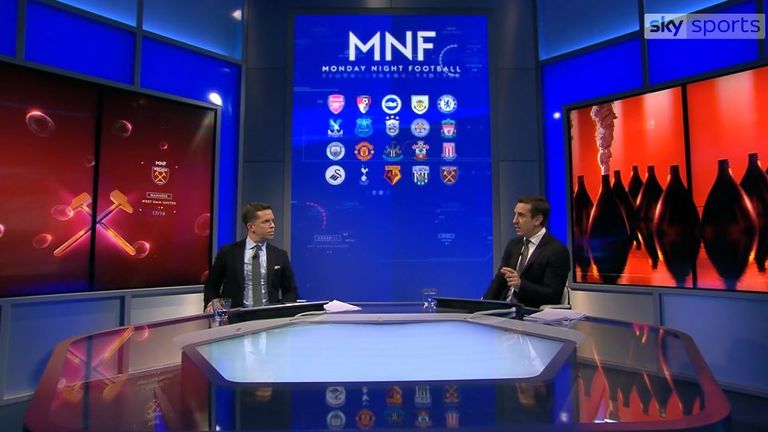 Gary Neville picked his Premier League team of the season on Monday Night Football - and he has made a few changes to the Professional Footballers' Association Team of the Year.

The Sky Sports pundit, who changed the formation of the side from a 4-3-3 to a 4-4-2, agreed with seven of the 11 players in the PFA's side, sticking with David de Gea, Kyle Walker, Jan Vertonghen, Mohamed Salah, Kevin De Bruyne, David Silva and Harry Kane.

Nicolas Otamendi, Marcos Alonso, Christian Eriksen and Sergio Aguero all miss out in Neville's side, but who has he brought in?

Vincent Kompany in for Otamendi

NEVILLE SAYS: "Otamendi's had a good season but there's something that holds me back from full championing him as my player of the season. I have to say all the stats point towards Otamendi but I'm going to go for Kompany.

"I think City would have always won the league had Kompany not have played, but what I would say is he was a strength in this last two or three months when the players in the squad, who'd not won the league before, needed it. It was essential he came in. He made them look better, he made them look stronger, he led and he gave captain's performances.

"For me, the last two or three months have stuck in my mind. If you'd asked me at Christmas, I may have given it to Otamendi but now it's just an instinct and something I'm feeling inside, and that's what I'd do if I was a player in the dressing room voting for the team of the year. I'd go for Kompany because on and off the pitch he's vital."

Andrew Robertson in for Alonso

NEVILLE SAYS: "There hasn't been an absolute stand-out left-back. There have been problems at left-back. Tottenham have changed left-back, United have had to put Ashley Young there and does need consideration in the thought process in terms of how he's played.

"Between the two candidates I was left with, you look at Alonso and Robertson. Robertson, earlier in the season, I made a comment that I didn't think he was good enough. I wasn't talking about how he was going forward but more his defensive work. I'd done a lot of work on him when England played Scotland. I did a lot of the opposition analysis and we saw him as a weakness going back. I thought he would be found out defensively, with a goalkeeper and a defence I wasn't convinced by him and I thought that he would falter.

"However, he's done a lot better than I ever imagined. I have to hold my hands up and then you bring him into consideration with Alonso. In terms of goals, it's a no-brainer. Alonso's scored more goals, but clean sheet ratio, Robertson's better. I'm going to go with Robertson, because ultimately Liverpool are having a fantastic season. I'm not entirely convinced by the season Alonso's had."

Raheem Sterling in for Eriksen

NEVILLE SAYS: "I felt I had to get in Sterling or Sane. I've liked Sane since the moment I first saw him. I think he's going to be a devastating performer for City for many years. I hate to think he's wearing a City shirt. When I look at him he can become one of the real great players in this next four or five years. He has so much improving to do.

"Sterling has had the most outstanding season. I looked at the stats and goals, yes, Raheem has obviously won that one hands down. However, what made me go for Raheem in the end was the big moments. The Bournemouth away game earlier in the season. The Huddersfield away game, the Southampton game which proved to be a big one for City. They are just three moments that you can think that sometimes get lost in a season because they are not the most important matches. He had influence and is choosing the right pass more in the final third, so I'm going to go for Raheem Sterling. I think he deserves to be in for the season he's had."

Roberto Firmino in for Aguero

NEVILLE SAYS: "I love Sergio Aguero, and he's been in my team every single year. He's been my favourite striker in the past four or five years but I just felt that Firmino should be in.

"When I watch Liverpool, he's been the catalyst in term of the pressing, the back-tackling, from the runs he makes in behind, he's very unselfish.

"I think if you're Pep Guardiola you'd want him as your striker in terms of the way Jesus plays and the runs forward but also the runs back. Jose Mourinho would want him at Manchester United, I think Real Madrid would want him, Barcelona would want him. He doesn't get the credit that Salah has had this season, but for me, Firmino should be in."