Which young stars could make a big impact in new season?

Ahead of the new Premier League season, which kicks off live on Sky Sports on Friday when Liverpool face Norwich, we pick out five rising stars who could be set for breakout campaigns...

Still only 17, Greenwood had quite the introduction to senior football when he came on as a substitute during Manchester United's memorable win over Paris Saint-Germain in the spring, but could he be set for a bigger role this season?

Ole Gunnar Solskjaer appears keen to promote young talent and Greenwood is the pick of the bunch. The winner of the Jimmy Murphy Young Player of the Year award at Old Trafford last season, the forward can beat a man and shoot powerfully with both feet. 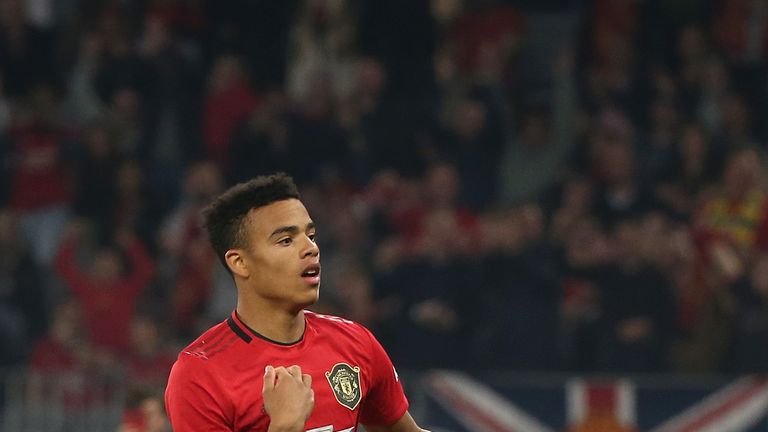 He has got a chance to start [against Chelsea], definitely

He has already shown promise during pre-season, offering glimpses of his dribbling ability in the win over Perth Glory before scoring his first senior goals for United against Leeds and Inter Milan. After the goal-scoring display against Leeds, Solskjaer said, "He's a talented boy and has every opportunity to make it as a Manchester United player," and hinted Greenwood could start United's Premier League opener against Chelsea.

Greenwood is being used on the right wing, a problem position for United, and if he can continue to make an impression in the coming weeks and months with his ability to cut in from that flank, this could be a breakthrough campaign for the teenager.

When Daniel Sturridge left Anfield this summer, many expected Jurgen Klopp to bring a new striker into Liverpool's squad.

But Klopp knew he did not have to open the club cheque book in order to fill Sturridge's shoes, with a replacement already waiting in the Anfield wings in the form of exciting youngster Rhian Brewster.

The 19-year-old suffered serious ankle and knee damage in January 2018, a few months after winning the Golden Boot during England U17s' victorious World Cup campaign, but he has fought back to full fitness, signing a five-year contract last year and earning a spot on the bench in Liverpool's Champions League final win over Spurs.

He featured seven times in pre-season, scoring four goals, with Klopp purring about his teenage frontman and promising him an important role this campaign.

"Brewster is a top striker, he is a top talent and I have told him already that he has an important role this year, but how important depends on him," he said. "He has to play different positions as well - the centre, wing is possible I think, we will see how we line up, but there will be opportunities for him. I am sure."

The 19-year-old Portuguese midfielder has already had a busy career, hopping from the Benfica academy to Chelsea, then onto West Ham having rejected Arsenal, before settling at Watford and making 13 appearances last term.

His two goals from range against Reading and Cardiff last season caught the eye, but he has more than an audacious effort in his locker.

Unusual for a young talent with such a sharp turn of pace, and though he has played on the wing sporadically in his youth career, Quina is predominantly a central midfielder, and not one to simply keep things ticking over. He's happy to risk possession to break the line between defence and attack, and his defensive work comes as an added bonus.

Athletic and technically brilliant, Quina is of course raw. Under Javi Gracia, the youngster was given a run of games around Christmas, but was used sparingly in the new year until a shoulder injury kept him out of final handful of games.

This will be a telling season for Quina; Watford have central options in Etienne Capoue, Abdoulaye Doucoure and Will Hughes, but if Gracia can round off the edges of Quina's game, they'll have the perfect central midfielder.

We’ll bring you highlights of every Premier League game on the Sky Sports website and app at full-time or from 5.15pm on Saturday afternoons.

Ralph Hasenhuttl has said he wants to create a "new spirit, a new mentality" at Southampton this coming season and young forward Michael Obafemi could well play a key, driving role in that vision as the manager looks to refresh his squad.

Obafemi, who turned 19 in July, became Southampton's youngest-ever Premier League goalscorer last December with his cool finish against Huddersfield but, after seven appearances, a string of hamstring problems ended the pacey player's 2018/19 season in February.

Now fit again, Obafemi travelled to Southampton's training camp in Austria after the club said they didn't want him to play for Republic of Ireland's U19 side at the European Championships.

That suggested he is in Hasenhuttl's plans for the season ahead - despite the arrival of Che Adams from Birmingham and the confirmation of Danny Ings' permanent move from Liverpool. Now, with pre-season minutes under his belt, Obafemi will be hoping to hit the ground running.

Arsenal were desperately short of pace and penetration in wide areas last season. Unai Emery has addressed that with the club record purchase of Nicolas Pepe from Lille but Reiss Nelson will also be looking to provide an internal solution for the Gunners head coach.

The 19-year-old grew up in the same south London neighbourhood as Jadon Sancho and followed his childhood friend to the Bundesliga last season, scoring seven goals on loan at Hoffenheim and, like Sancho, enhancing his reputation significantly. He showed a willingness to run at defenders and created plenty of chances as well as scoring goals himself.

Nelson's talent is not in question - he impressed again with a goalscoring display for England's U21s against Croatia at this summer's Euros and scored in Arsenal's 1-1 draw with Angers in pre-season - but according to former Hoffenheim boss Julian Nagelsmann, he still needs to improve the defensive and tactical sides of his game. If he can do that, there's no reason why he can't establish himself at Arsenal this season.

Which players are you tipping for breakout campaigns? If reading on skysports.com, comment below to get involved in the debate, but please adhere to our House Rules. If you wish to report any comment, simply click on the down arrow next to the offending comment and click 'Report'.