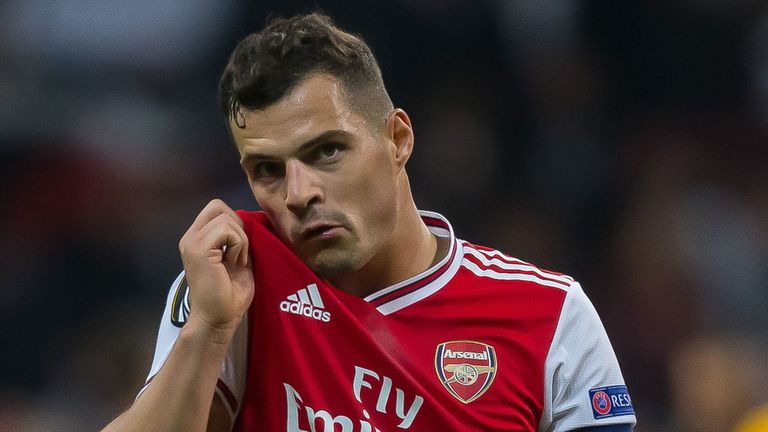 Xhaka replaces Laurent Koscielny after leading the team in six of their eight games this season. Emery consulted with his players before informing the squad this morning ahead of Monday's game at Manchester United, live on Sky Sports.

Emery has also selected a leadership group to support Xhaka as captain made up of Pierre-Emerick Aubameyang, Hector Bellerin, Alexandre Lacazette and Mesut Ozil.

Xhaka has yet to convince onlookers in the role so far this season and was jeered by his own fans during last weekend's win over Aston Villa, but Emery is confident the Switzerland international can change opinion.

"Xhaka is mature, he has experience," the Gunners boss said. "We are living under pressure and criticism; as a coach, as a player, as a club. The most important thing is to stand up in each moment.

"I spoke with him, we want to change that outside opinion [of him]. The respect he has inside is very important. I trust and believe in him. He is a good man, a good professional, a good player.

"Sometimes he has made mistakes but the most important thing is to analyse, to learn and correct those mistakes. He can go ahead with his quality, with his behaviour, with his commitment and the players voted him as the first leadership."

Emery introduced a pool of five captains following his appointment last summer but saw his original choices reduced by the summer departures of Koscielny, Petr Cech and Aaron Ramsey.

Analysis: Fans won't be as happy as the players

A Sky Sports public poll for fans to name their preferred choice of skipper, run after Rob Holding revealed the planned players' vote for the captaincy, resulted in Xhaka picking up just eight per cent of the 40,000 votes.

Holding himself came out on top in that vote, winning 30 per cent while David Luiz was next in at 16 per cent and Aubameyang pulled in 15 per cent.

Sky Sports News reporter, Jessica Creighton said: "It's interesting that Emery has decided to name a captain ahead of such an important game, perhaps he feels the team needs leadership.

"Xhaka seems a divisive character within the fan base, especially on social media. There's been lots of memes on Twitter this morning. Also, Xhaka has drawn criticism from pundits due to his defensive errors and there was a time when he was booed off the pitch. I don't think the fans were expecting this appointment, but the important ingredients are the players. There was a vote and Xhaka led the way."