By Ben Grounds at Selhurst Park

Crystal Palace manager Roy Hodgson admitted to being unaware of a flashpoint involving Wilfried Zaha and James Ward-Prowse as his side suffered a 2-0 defeat to Southampton at Selhurst Park.

Southampton secured a fourth successive away league win in the Premier League as goals either side of the interval from Nathan Redmond and Stuart Armstrong consigned Palace to a first league defeat in six games which sees them slip to 11th in the table.

It was a flat performance from the hosts, and the frustrations of Zaha looked to have got the better of him when he petulantly poked Ward-Prowse in the face after the half-time whistle.

The players were separated by teammates and stewards, with referee Andre Marriner having missed the incident - but following a VAR review, Zaha avoided a red card for violent conduct.

When asked repeatedly about the heated confrontation between two old foes, an irate Hodgson said: "Are you going to still talk about it? I told you I didn't see it, but you're still going to talk about it.

"I don't know what incident you're talking about. The fact is, at half-time, I was talking to the players - and Wilfried Zaha was one of the 11 - about what we were going to try and do in the second half.

"I only just found out that I was going to get questions about an incident with Wilf, but I don't know what that incident is. All I've heard is that VAR looked at this incident and decided there was nothing to do about it. That's good enough for me. 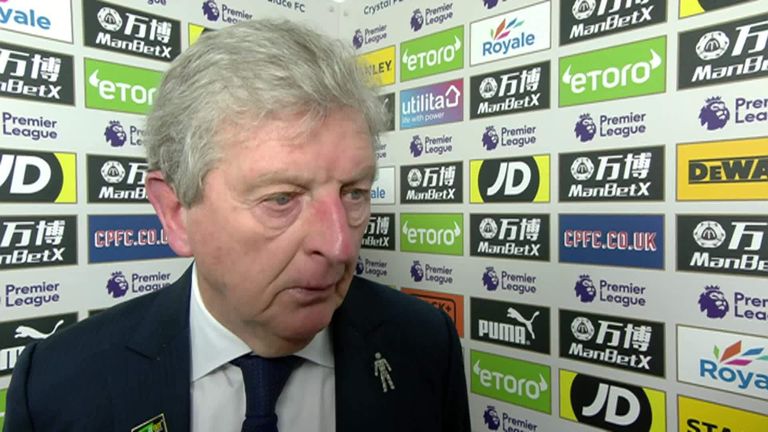 "It was good enough for me also when they looked at an incident involving Luka Milivojevic and decided to send him off [in the FA Cup third round against Derby] and we've missed him for three games."

Whilst the incident went unpunished, it could still be reviewed by the FA. There was plenty of needle between the pair following Zaha's dismissal when the sides met in January 2019 at St Mary's, when Marriner was also in charge.

Ward-Prowse squared up to the Ivorian following a challenge on that occasion, and after the Palace forward felt he ought to have been awarded a free-kick, he was sent off for showing dissent towards the match official.

Their latest confrontation set the tone for a feisty second period as tempers flared once more between Palace captain James Tomkins and Redmond in the closing stages - by which point Southampton had another impressive victory on the road sewn up.

Palace came into the fixture on a high, having earned a hard-fought 2-2 draw at Manchester City, but the momentum built from the resolve shown against the champions was sapped by the superior Saints.

When asked if those exertions at the Etihad had caught up with his side, Hodgson added: "Yes they did, but we can't use that as an excuse because we had the same rest period between the last game as the other teams in the league. So it's more a question where the same XI basically have had to fight their way through games. FREE TO WATCH: Highlights from Southampton's win against Crystal Palace

"When you throw tough games into the bargain, I think it caught up with us tonight. I'm not thinking about the transfer window as much as I'm thinking about recovering six players.

"That's a lot to be missing from your squad, and I'm not talking about six who never play. We're talking about Christian Benteke, Andros Townsend, Jeffrey Schlupp, Mamadou Sakho, Patrick van Aanholt and Luka Milivojevic. All these guys normally play in the team.

"They'll be like new players when they come back because we've been doing without them for the last four or five weeks."

Southampton are in FA Cup fourth round action this Saturday at 3pm as Tottenham visit St Mary's before Saints return to Premier League duty on February 1 away to Liverpool at the same kick-off time.