Arsenal deserved victors over Tottenham in Sunday's North London derby as Gunners' record against 'big six' opponents improves under Arteta; "They didn't play against Tottenham like they did last season. They were on the front foot and dominated. They looked and played like a big team."

Jamie Carragher says he is impressed by Arsenal's progression under Mikel Arteta after they dominated Tottenham to win Sunday's North London derby.

Since Arteta was appointed as Arsenal's new boss less than 18 months ago, the Gunners have beaten Manchester City and Chelsea on their way to FA Cup success, knocked Liverpool out of the Carabao Cup, and have already won in the Premier League against Manchester United and Chelsea this season.

But it was the style and manner of Sunday's victory over Spurs which stood out for Carragher.

"I like what l see from Mikel Arteta," Carragher told Monday Night Football. "Last season he was very pragmatic, because he had to be, and it won the FA Cup, beating big teams.

"They didn't play against Tottenham like they did last season. They were on the front foot and they dominated. They looked and played like a big team."

In all competitions, Arsenal have won nine matches out of 19 against 'big six' sides under Arteta, compared to just three victories from the same number of games prior to the Spaniard's arrival.

"Yes, Arteta was fortunate that after Arsene Wenger goes and Unai Emery went quickly, the next manager was always likely to get a lot of time. Arsenal couldn't be seen as a club which always changed manager every 12 months," continued Carragher. "That helps Arteta.

"But l also think moving on Ozil, Sokratis and Mustafi in January, that almost brought a feel-good factor to the club.

"I am impressed what they are doing." Jamie Carragher and Thierry Henry explained how Mikel Arteta’s Arsenal side exploited the left flank in their 2-1 win against Tottenham and the importance of Emile Smith-Rowe in the victory. 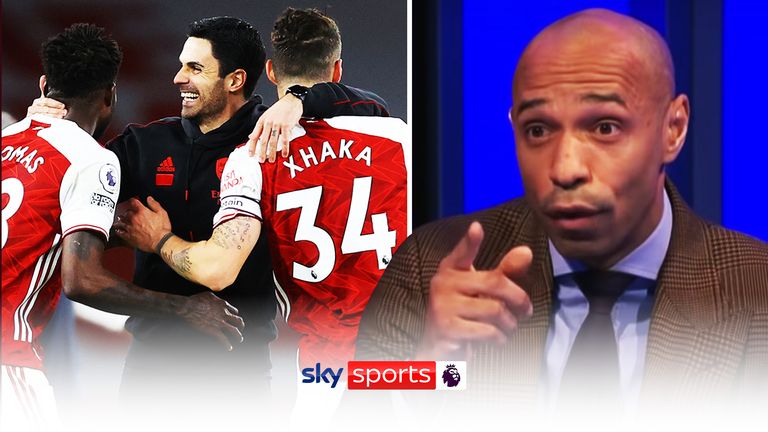 Speaking on MNF, Arsenal legend Thierry Henry feels the club are making progress under Mikel Arteta but are lacking consistency in their performances this season

"The squad is good. Can it be better? Yes.

"Was there any progress? Yes.

"The table doesn't lie, and even though they won on Sunday they are still behind Tottenham and behind a lot of teams. But it is a process, he says it himself, and hopefully it will explode soon, but consistency needs to happen pretty quickly."