It is understood players will not be able to complete their 10-day quarantine at home and must instead use a club facility, which they can only leave once a day to train or play; Liverpool boss Jurgen Klopp says the exemption is 'not a real solution' 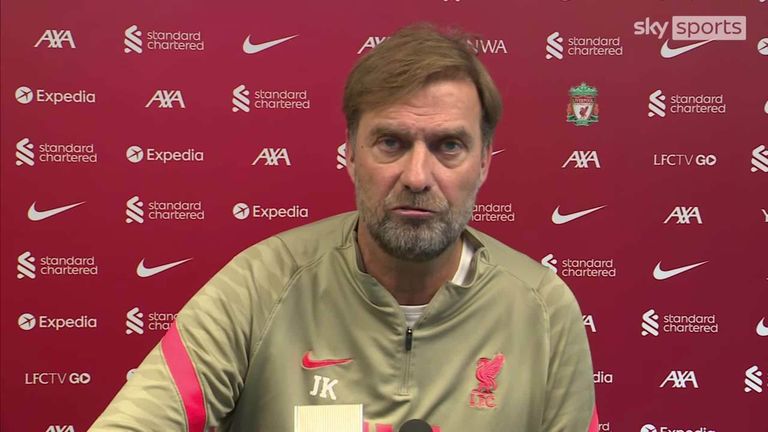 Fully vaccinated players will be able to travel for international duty in red-list countries this month.

A bespoke quarantine exemption has been agreed between the Premier League, the government and the health authorities which will enable players to travel and then play for their clubs on their return.

The government confirmed the plans on Friday afternoon. The agreement was reached after assurances were given that players would be in Covid-secure 'bubbles' with their national teams and on return to their clubs, with FIFA welcoming the announcement.

FIFA said: "We have worked closely with the UK government, Football Association and Premier League to find a reasonable solution, in the interests of everyone, and we believe this is a much more desirable solution to the situation that players faced in September.

"We encourage COVID-19 vaccinations and endorse the World Health Organization's position: safe, fair, and equitable access is critical in all countries. Players should not receive priority access to vaccines."

Arrivals from red-list countries, even those who are double vaccinated, are usually required to quarantine for 10 days in a government-approved hotel.

It is understood players will not be able to quarantine at home and must instead use a club facility, which they can only leave once a day to train or play.

A government spokesperson said: "We have worked closely with football authorities to achieve an outcome that balances the interests of both club and country while maintaining the highest levels of public health and safety.

"Our best defence against the virus is vaccination and these new measures will allow fully vaccinated players to fulfil their international duties in the safest, most practical way possible, while allowing them to train and play with their clubs as early as possible upon their return."

The news comes after Brazil had issued call-ups to eight Premier League players, while the president of the Mexican federation, Yon De Luisa, told PA it had called up Wolves striker Raul Jimenez.

The Covid security measures around red-list players are in addition to existing emergency protocols being operated by Premier League clubs.

It initially appeared this stance would lead to players being barred from representing their clubs in the five days after the end of the break, after a request was made by four national associations - including Brazil's - to FIFA to impose an automatic restriction.

However, the request was dropped after what FIFA described as "positive signals and constructive dialogue" with the British Government.

Since then, FIFA president Gianni Infantino met with Prime Minister Boris Johnson at a United Nations gathering in New York, where the pair discussed, among other things, "the ongoing co-operation established to support travel during international windows and partnership to ensure equal opportunities for all."

Under the new agreement, players will train and play while fulfilling their mandatory 10-day quarantine, and will self-isolate aside from when they are carrying out their professional duties.

Liverpool manager Jurgen Klopp said the exemption was "not a real solution".

He said: "10 days' quarantine, allowed to play the games, to go work, not allowed to live at home, but don't have to live in a hotel chosen by any authorities. Food has to be delivered in front of your room door, you're not allowed any visitors.

"If that's the solution I don't know where it's coming from.

"In our case we talk about the Brazilian players (Fabinho and Alisson), Kostas Tsimikas and Sadio Mane. It would mean they go for 10-12 days with their national teams and then go another 10 days away from their families in quarantine. That's 22 days.

"And then two weeks later is the next international break. It doesn't sound like a real solution.

"Some countries are on the red list in the UK but not for France, Germany. Players are always in bubbles, here and on international duty, so I don't know how that's different to what it already was.

"I don't think it's been properly thought through. It feels a bit like somebody opens the door in an important office in the government and says, 'by the way, we still have to sort that with the footballers. They don't like the situation with the hotel? Let them go in another hotel.'

"Come on boys. We're taking people out of normal life for three weeks for no real reason. We take care for our players when they live here and their families. They don't do anything else. They go home, come to training and go home.

"I don't expect the government to be 100 per cent in a Premier League situation and think about the need of specific players, but the Premier League has to fight for our players."