​​​​​​​How do Jose Mourinho and Manchester United get the best out of Paul Pogba? Frank Lampard and Jamie Carragher took a detailed look on Monday Night Football.

The Frenchman became the world's most expensive player when United paid £90m to re-sign him from Juventus, but he has been unable to lift them into the top four and he has contributed just four goals and three assists in 25 Premier League games so far.

Lampard, who scored 177 Premier league goals from midfield over the course of a glittering playing career at West Ham, Chelsea and Manchester City, insists there's plenty of room for improvement.

"It was a signal of their intentions to spend £90m on player who I wouldn't say is the finished article," he said on Monday Night Football. "He's got fantastic attributes. He's strong, he's got great feet, he's bigger than you and he's quicker than you as a midfield player.

"But when you have a £90m price-tag on your shoulders, we analyse more and we want more. I'm still wondering, what's his best position? What kind of player is he? What does he want to be?

"I feel a little bit like he has fallen in between everything. When you pay £90m you want to see results, and he hasn't quite delivered. He's young and he possibly will do, but as it stands he hasn't been a game-changer.

"The problem he has is all of our perceptions. Who would you pay £90m or £100m for? Suarez, Ronaldo, Messi. They bring 40 to 50 goals a season. They win games on their own week in, week out. We don't know that Paul Pogba can do that yet, but he's being judged on it.

"We need to give him time. We need to flip forward to next season and see if he's improving his game. But at some stage he has to be that dominant midfield player because I do believe that's in him. The problem for me is that if you spend £90m, you don't want a £90m problem."

Mourinho has used Pogba in a deep-lying, two-man midfield as part of a 4-2-3-1 formation in recent weeks, but Carragher insists he is ill-suited to the role. The Sky Sports pundit referenced United's 2-1 loss to Manchester City in September, when he described Pogba's display as "one of the most ill-disciplined" he had seen. 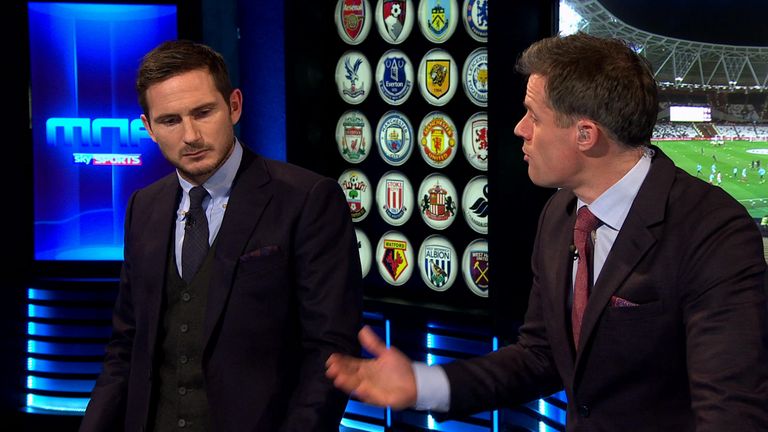 "Six months later nothing has changed," he said on Monday Night Football. "He's still nowhere near good enough or disciplined enough to play in that central midfield role.

Lampard agreed. "His responsibility there has to be more defensively-minded," he said. "I think when Mourinho is playing a two, he wants them to defend. He wants their first thought to be security. I feel harsh criticising him because I don't think it's his real attribute to do that. I feel Jose Mourinho would want a holding midfield player to be doing that job.

"You do see a link between him and Zlatan Ibrahimovic, and he's trying those long passes, but my question is how much do you want him in that deep role spraying balls? If you want him to be like Scholes in his latter years, spreading balls from midfield, is that the job for a £90m player?"

Lampard insists Pogba needs to be closer to the opposition's goal. "Pogba has the ability to score and create goals, but from the position he's in, it's a long way to go. If he's not close enough, he's not going to get numbers as high as he should. It's a problem for Manchester United and a problem for Jose Mourinho."

So what's the answer? Carragher believes it's a switch to a 4-3-3 formation. "I think there's no doubt that he's better in a three-man midfield," said Carragher. "That's what you would class as the Frank Lampard position - wide left in a three."

"I played most of my career in that position and I loved it because the responsibility first and foremost is to get the ball in [attacking] areas and make goals," said Lampard. "If he's up there, he can affect the game around the box."

But as Carragher pointed out, Mourinho needs his midfielders to score regularly if he is to use a three-man midfield instead of a second striker. At the moment, that's not happening. With just 39 Premier League goals this season, United have by far the lowest total of the top six.

"When Mourinho looks back at the end of the season and he's going through it with his staff, with Ed Woodward, he will say we need more goals," said Carragher. "In that 4-3-3 the idea is that you don't need a second striker because you get goals from midfield. If Pogba is not providing goals, Mourinho is going to want another attacker there.

"I think it's a massive problem for Mourinho. You've spent that much money on a player, that position is best for him, but he's lacking goals and there's talk of Antoine Griezmann coming in.

"They're going to want to spend big money on someone to get those goals. So if they get a Griezmann, or someone of that ilk, he then has to play [behind the striker] and you've still got the same problem. If you break a transfer record on Griezmann, he's going to have to play week in week out, so again, Pogba finds himself in that position in a midfield two."

Lampard believes the only alternative in that situation would be to play Pogba out wide. "If you're going to get the best out of him I think you have to give him some freedom," he said. "To get him advanced, you've got to play him in one of the wide areas. You have to swap him with Anthony Martial and get him up the pitch.

"He could certainly play that role but are you getting the best out of him? I know Steven Gerrard did it a lot for Liverpool and he was very effective at coming in off the side, but Pogba's qualities are more central for me, so by doing that, again, you're shifting around what might be the real issue."

It's a conundrum for Mourinho, but Carragher insists it ultimately comes down to Pogba to deliver. "At the end of his time at Manchester United, there are probably two things Paul Pogba needs to be a success. Manchester United have got to go and win a league or a European Cup, and he's got to be the driving force behind that.

"I think individually, he's got to match this man on my right, as well as Steven Gerrard and Yaya Toure, those great central midfield players who drive the game forward and get goals and assists."