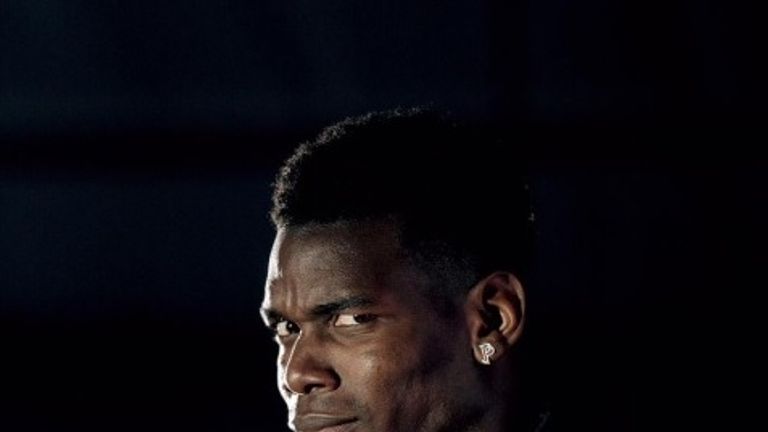 In a photo, the France international playfully stared sideways into the camera, while in the accompanying text he invited his followers to "caption this!" and included the hashtag #heretocreate - the slogan to a marketing campaign by his sponsors, Adidas.

The social post, which also went up on Instagram, may have been scheduled in advance by Pogba's PR team.

Pogba was at an Adidas event in Paris on Monday night where it is though the image was taken.

Sky Sports football pundit Gary Neville was not impressed by the tweet and responded later on Tuesday morning.

The former Manchester United defender tweeted: "" Caption This".... You do one as well!"

You do one as well !

He tweeted: "Spot on! Plenty of clubs in Europe doing fine without him!!"

Spot on! Plenty of clubs in Europe doing fine without him!! https://t.co/jduiTvsyFJ

Former United defender Patrice Evra was unhappy that Pogba's fractured relationship with Mourinho continued to grab headlines, even after the latter was sacked.

The thing that is annoying me the most right now is why are people so focused on @paulpogba and Jose Mourinho. Let's focus on rebuilding something solid instead of being in a playground. Doing this is only disrespecting the badge, from now we only need positivity. #ManUtd #MUFC pic.twitter.com/ClmWqmgf7G

United announced the decision to move on from Mourinho after the club's worst start to a season in 28 years was confirmed with defeat at Liverpool on Sunday.

Pogba was an unused substitute at Anfield as United were convincingly outplayed.

Mourinho has clashed with Pogba this season, announcing in September the 25-year-old had been stripped of the vice-captaincy.

The pair were filmed by Sky Sports News having an animated disagreement on the training ground later that month.