Ole Gunnar Solskjaer says the Manchester United squad have everything to re-emerge as a dominant force and win trophies on a regular basis.

Manchester United, whose last honours were the Europa League and League Cup double under former boss Jose Mourinho in 2017, are 14 points behind Premier League co-leaders Manchester City and Liverpool despite the club's upturn in form under the Norwegian.

Solskjaer will aim to maintain his unbeaten record in caretaker charge at Fulham at lunchtime on Saturday, live on Sky Sports, and called on his squad to maintain their high standards.

The former United striker revealed earlier on Friday he had outlined his long-term vision for the club to executive vice-chairman Ed Woodward and Solskjaer has given greater clarity on his ambitions.

"Well, challenging for every trophy there is of course," he said.

"That is what we should be about. We have to move slowly because we are fifth at the moment. It seemed like we were never going to move away from that sixth position.

"There are six very good teams that will all challenge for the trophies. We have got the resources, infrastructure, history to move towards the top.

"That is the only way we should think of things at Manchester United."

United face Paris Saint-Germain in the first leg of their Champions League tie on Tuesday and Solskjaer is adamant the club will once again be in contention for silverware on both the domestic and European scenes. 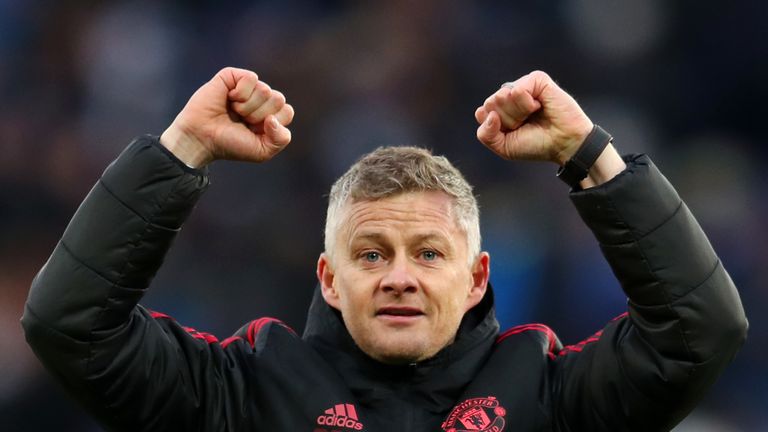 If we don't dream, if we don't have that vision of where we are going then we will just falter so for me I am only used to this club challenging for trophies. That is where I see us.

"That is what we have to strive for," Solskjaer, who has become the front-runner for the role on a permanent position, added.

"If we don't dream, if we don't have that vision of where we are going then we will just falter so for me I am only used to this club challenging for trophies. That is where I see us."

Solskjaer dismissed Manchester City boss Pep Guardiola's assertion the club were still in contention for the league title but says a first league success in seven years next term was achievable.

"You have got to catch up with the teams ahead of us, especially Manchester City, Liverpool and Tottenham. They are in the run-in.

"It is three teams that have been far ahead but we have beaten Tottenham so we know we are capable of that but we need the consistency.

"But two years' time is long enough but also short enough to say we have got the possibility to make a big difference in our preparation, everything.

Assistant manager Mike Phelan revealed his belief the side can win everything at the club if they maintain their form and Solskjaer has echoed that assertion, highlighting the role two regular starters can have.

"The club and the team can. When you look at the players, the age - we are young, they have got plenty of development in them.

Martial: We are seeing the real Pogba

Anthony Martial is targeting titles after he signed a new Man Utd deal and believes Paul Pogba can lead the club to "great things".

"We also need some experienced players to stay and step up and really become the leaders.

"Paul [Pogba], Jesse [Lingard] - they are at that age when we expect them to take that responsibility and not just be a young boy that floats around."