Fernandes: "My love of Manchester United really started when I used to watch Cristiano Ronaldo play and ever since then I have been a big fan of this great club"

Manchester United have completed the signing of Bruno Fernandes from Sporting Lisbon.

The midfielder has signed a five-and-a-half-year contract at Old Trafford, with the option to extend for a further year.

United will pay an initial fee of around £46.6m to Sporting, with potential add-ons taking the overall deal to £68m.

He is eligible to make his debut against Wolves on Saturday evening, live on Sky Sports Premier League.

United have agreed a deal which could see them pay up to £68m for the Portugal international, who scored 63 goals in 137 games for Sporting.

"My love of Manchester United really started when I used to watch Cristiano Ronaldo play and ever since then I have been a big fan of this great club," Fernandes told United's website.

"For me to now play for Manchester United feels incredible, I have worked hard to get to this moment and I can promise the fans that I will give everything for the badge to help bring us more success and trophies.

"I want to thank Sporting for everything they have done for me. It is surreal to hear the nice words that have been said about me from players that used to play for this team.

"A massive thank you to Ole and everyone at Manchester United for the trust they have shown in me and I can't wait to start to repay that on the pitch."

Fernandes becomes United's first signing of the January transfer window and manager Ole Gunnar Solskjaer is pleased to have secured a deal for the 25-year-old, who was also targeted by Barcelona.

"We have been tracking Bruno for many months and everyone here has been tremendously impressed with all his attributes and what he will bring to this team," Solskjaer said.

"Most importantly he is a terrific human being with a great personality and his leadership qualities are clear for all to see.

"Bruno's goals and assists stats speak for themselves, he will be a fantastic addition to our team and he will help us push on in the second part of the season.

"The winter break is coming at a perfect time for us to integrate Bruno into the squad and for him to get to know his team-mates."

'Another piece of the jigsaw for Solskjaer'

Sky Sports News reporter James Cooper on the arrival of Bruno Fernandes and the likelihood of further transfer business at Manchester United...

"Ole Gunnar Solskjaer will get a better idea about his fitness when Fernandes is set to participate in the club's training session on Friday.

"Fitness-wise the medical was a formality so I don't think there is any conjecture there and we will get a better idea on whether he will be available for the weekend. 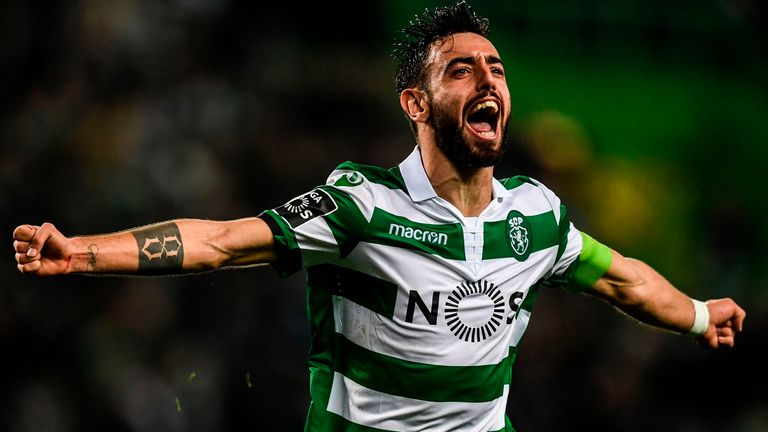 "Manchester United fans were looking for a signing, Ed Woodward had a torrid and difficult week and a signing has been delivered which could provide the basis of an overhaul for the club's squad.

"This is another piece of the jigsaw following the big business last summer and there is set to be more next summer, and this is part of United building a process to become a threat both at home and abroad.

"Solskjaer primarily wanted Fernandes this January, he went out to Lisbon to have a look at him and he fits the bill. He has great credentials coming from Portugal, doing a deal wasn't easy with Sporting, but he is a Manchester United player now.

"In terms of other acquisitions, Solskjaer would dearly love a striker but that might be too difficult to get over the line by 11pm on Friday."