Manchester United choose not to use government furlough scheme for staff

Manchester United to keep 900 members of staff on full pay

Manchester United will not be using the government's furloughing scheme to protect around 900 full-time members of staff during the coronavirus pandemic.

In an email addressed to all those affected, chief executive Ed Woodward confirmed the club would instead continue to pay all employees as if they were working as usual.

Staff have also been assured of flexibility around any care responsibilities during the lockdown while those unable to work from home or on a reduced workload have been encouraged to volunteer with the NHS or local community.

Goodwill payments for non-matchday casual workers, around 950 people, have also been extended until June 1, covering average weekly pay based on hours worked between December and February.

The club also added they would 'continue to make the goodwill payments already committed to matchday casual workers for the remainder of this Premier League season' and would be considering how to further support this group - which includes around 3,000 people. 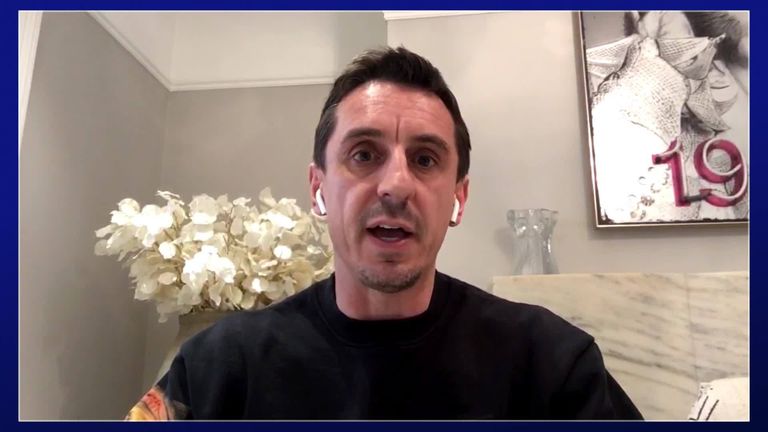 Gary Neville claims there needs to be a collective deal from the Premier League and the clubs which suits the whole of football, including struggling EFL clubs

Former United captain Gary Neville gave his reaction to Sky Sports, saying: "As a Manchester United fan, I'm disappointed it has taken three weeks for them to come out with a meaningful statement.

"Manchester United, as the most famous club in the world and the biggest club in the Premier League from a revenue point of view, should be pioneering and leading from the front. I'm not sure I've been that yet but maybe it will come."

United's announcement comes a day after local rivals and Premier League champions Manchester City became the first top-flight club to confirm they would not be furloughing any of their non-playing staff.

It comes after five top-flight sides had already decided to place non-playing staff on furlough, meaning the government will pay 80 per cent of their wages while they are not working.

Two of these clubs were Tottenham and Liverpool - who together made more than £150m profit according to their most recent accounts - although Liverpool have since reversed their decision on using the job retention scheme following criticism levelled towards them.

Newcastle, Bournemouth and Norwich are the other Premier League sides to place non-playing staff on furlough.