Sir Alex Ferguson turned to Van Persie in the aftermath of Manchester City's dramatic title triumph in 2012. The Dutchman was tasked with restoring United's position at the top of English football and he delivered, emphatically.

Van Persie would go on to feature in all 38 games of United's title-winning campaign and retained the Golden Boot he had won the previous season at Arsenal with a league-high 26 goals.

In his first season at Old Trafford, his goals contributed 27 points to United's overall points tally, a figure only bettered by Alan Shearer in 1993/94, where his goals earned Blackburn 32 points.

Late winners on the road against Southampton, Liverpool and in the Manchester derby saw Van Persie endear himself to the United faithful instantly, but it is his three strikes against Aston Villa at Old Trafford that remain etched in the annals of Premier League history. 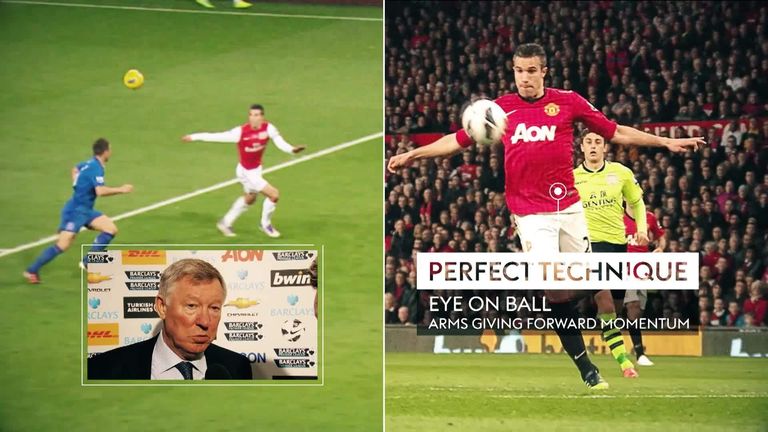 This week’s Gillette Precision Play Gold is Robin Van Persie’s volley against Aston Villa, which was described by Sir Alex Ferguson as the 'goal of the century'

Van Persie tapped United into the lead from close range with just 90 seconds on the clock before emphatically volleying his second home from Wayne Rooney's long diagonal within a quarter of an hour. And, after showing great composure in the box, a first-half hat-trick, a 3-0 victory and the title were sealed inside 33 minutes with a strike off the post.

Van Persie's hat-trick - United's 32nd in the Premier League era - is unique in the fact that, to this day, it has not been repeated by a United player, despite the club having a wealth of talent, that includes the likes of Wayne Rooney, Radamel Falcao, Zlatan Ibrahimovic, Romleu Lukaku, Alexis Sanchez, Marcus Rashford and Anthony Martial, to call upon during that time.

Forty-five players have scored a hat-trick in a Premier League since the Dutchman's title-winning treble, but not a single one of them has been representing Manchester United. In the meantime, Sergio Aguero has notched a staggering 11 league hat-tricks alone.

It will come as no surprise to learn that out of the top-six clubs Manchester City, spearheaded by Aguero, have scored the most Premier League hat-tricks over that seven-year period, registering 16. Tottenham have scored nine, Chelsea eight, Liverpool seven and Arsenal five.

Seven years ago, as the title celebrations took place on the Old Trafford pitch after Van Persie's heroics, Sky Sports commentator Alan Parry posed a question that resonates now more than it did at the time, 'Will we ever see their like again?'

Two weeks after winning back the title, Ferguson called time on his glittering reign at Old Trafford, spelling the end of an era of domination the like of which the Premier League and United haven't seen since.

Over the next seven years, United will hope to have addressed both of those unwanted records. Putting an end to one appears easy enough, the other may prove more difficult, but if they are in need of inspiration they should look no further than the night Van Persie and his left foot lit up Old Trafford.