Jadon Sancho has all of the attributes needed to handle playing for a club of Manchester United's stature, according to Jamie Redknapp.

The England international has lit up the Bundesliga since leaving Manchester City's youth system for Borussia Dortmund in 2017 and talk of a return to the Premier League is gaining traction ahead of the re-opening of the transfer window.

Manchester United have been heavily linked with the 20-year-old, with a report in Monday's edition of The Sun claiming "almost every detail of the transfer has been agreed" after months of "secrets talks" between Sancho and the club.

Speaking on The Football Show, Redknapp backed Sancho to deal with the pressure of playing at Old Trafford and believes any potential deal would be of benefit to the Premier League as a whole.

"Would a move to Manchester United be a good move for Sancho?" Redknapp told Sky Sports. "We're talking about an incredible talent, someone who has made some really good decision in moving abroad.

"He took a real risk and it's paid off; he's playing in the Champions League and has played amazing football for club and country.

"His next move is going to be so important because he has to make sure he gets in that team and plays regularly because he is an amazing talent, one of the best I've seen in a long time.

"We're talking about one of the top five players in the world in a few years, he has that much ability. If he goes to United, everybody knows that comes with playing at a club that big, but he looks like a man that can handle.

"It would be a brilliant move were it to come about and he would be a great addition to the Premier League."

Analysis: But how much would Sancho cost? 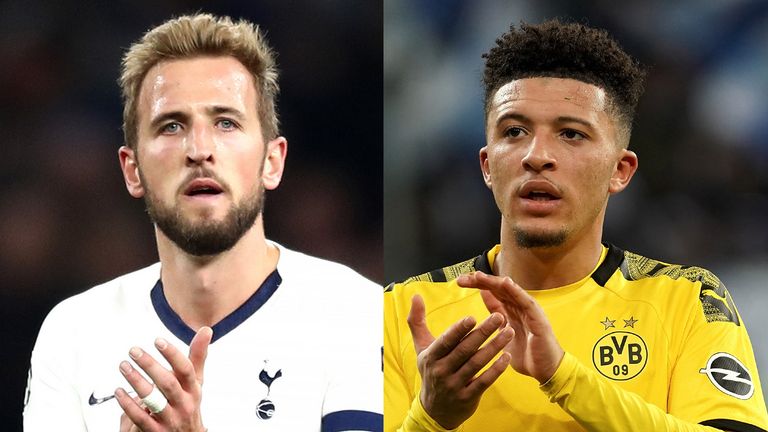 Harry Kane will not be a target for Manchester United in the summer but they are interested in Jadon Sancho and Jude Bellingham, James Cooper reports

'Jadon Sancho is a perfect example of the unknowns of the next window.

'He's young and exciting and a primary target for Solskjaer, but while a fee approaching £100m might have been something United looked at with interest, no one knows how valuations and transfer agreements are going to be structured in the wake of the lockdown.

'It's been suggested to me we may see an increase in player swaps between clubs and while recruitment is an essential part of a club's growth and development, any initial transfer window rush could be delayed until clubs have done their sums and worked out what they can spend and the value of what they've already got.'

'Sancho has been irrepressible this season, racking up 14 goals and 15 assists in just 23 Bundesliga appearances. With nine games still to play, he has already surpassed his totals for the whole of the 2018/19 campaign, during which he registered 12 goals and 14 assists in 34 games.

'The numbers are exceptional by anyone's standards. In fact, Sancho's combined total of 29 goals and assists this season puts him behind only two players in Europe's major leagues - and one of those is Lionel Messi.

'With a combined total of 60 top-flight goals and assists so far, he has racked up more than twice as many as Messi at the same age. His totals also dwarf those of Eden Hazard and Raheem Sterling. He has scored nearly twice as many goals as a teenaged Cristiano Ronaldo in all competitions.'