Edinson Cavani: How the super sub turned it around for Manchester United at Southampton

Edinson Cavani stepped off the bench to score twice and set up another in Manchester United's 3-2 comeback win at Southampton in the Premier League on Sunday;

Ole Gunnar Solskjaer knows a thing or two about making a difference from the bench, and he'll have been delighted with the impact of super sub Edinson Cavani on Sunday. But how did the striker turn it around for Manchester United at Southampton?

Solskjaer's side were trailing to two moments of James Ward-Prowse set-piece magic at half-time, after the Saints midfielder's corner was headed in by Jan Bednarek before he scored himself with a free-kick.

The United boss turned to Cavani. The Uruguayan was still doing up his boots on the side of the pitch when the second half kicked off but he was soon up to speed and with two impressive finishes and an assist for Bruno Fernandes the 33-year-old showed why he could be a shrewd signing.

It was the second time a United player had come on as a substitute and directly had a hand in three or more goals in a Premier League match. The first? Solskjaer himself, who scored four at Nottingham Forest in February 1999.

Here's the story of Cavani's second half…

A delayed entrance to the action due to... a boot change! 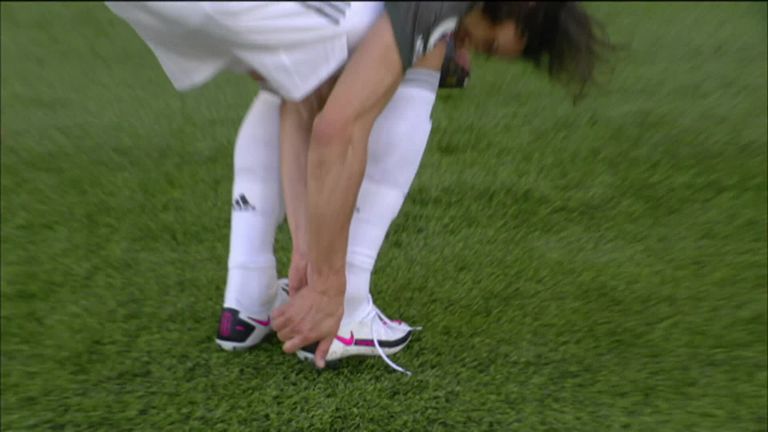 Edinson Cavani struggled to sort his boots out when he came on at half time, but he ended up not needing them as two headed goals grabbed Man Utd a victory late on.

Unlike a substitute called for in the heat of the action, Cavani had the majority of the half-time break to prepare for his introduction at the start of the second half. Yet somehow, despite all of his experience, he was changing his boots on the touchline as the game got back underway.

"How the guy is not prepared and ready to go on, it's mind-boggling," said a less than impressed Roy Keane on Sky Sports, although Solskjaer later suggested Cavani realised he'd need bigger studs.

Just 11 minutes into the second half, Cavani has a chance. Southampton 'keeper Alex McCarthy tips Fernandes' cross into the path of Donny Van de Beek who knocks it on. Cavani is there with a swivel and shot but it flies over the bar after clipping a Southampton defender on the way through.

An assist for Fernandes to give Man Utd hope

On 59 minutes Cavani helps get Manchester United back into the game.

Fred and Aaron Wan-Bissaka win it back in midfield, with Cavani involved in the build-up. The striker is then fed on the right flank by Wan-Bissaka and has room ahead of him to attack the Southampton box.

He looks up and measures a bending pass into the feet of Fernandes eight yards out who turns and scores.

Cavani averaged around five or six assists per season for Paris St-Germain in his peak - and he showed he still has the eye and craft to create for others with that cross for Fernandes.

With United pressing for an equaliser a half-chance falls to Cavani.

He gets up to meet to meet Wan-Bissaka's cross to the far post but he can only steer it narrowly wide of the upright.

Cavani shows his striker's instinct and equalises for Man Utd

Cavani makes it 2-2 on 74 minutes with an instinctive finish.

After a corner is only half-cleared to the edge of the Southampton box, Fred tees up Bruno Fernandes to rifle the ball back into the danger zone through a crowd of Southampton defenders. When it comes out the other side, Cavani is there to glance it in.

"Movement. Every young striker has to look at him," said Jimmy Floyd-Hasselbaink in the Sky Sports studio. "This is all about movement. He anticipates, he's always on the move, he knows where the ball is coming and puts his head onto it."

Deep into injury time, Cavani wins it for United with a superb header.

Fernandes shapes to send a free-kick from near the centre circle into the Southampton box but then clips it out wide to Marcus Rashford.

The England international clips in a cross towards the corner of the six-yard box and Cavani - who has darted into the space between two Southampton defenders - is there to stoop low and head in the winner.

"Movement again," said Hasselbaink. "If you see where he starts, he sprints to the first post and a nice little glance. It's all about Cavani. Of course, the ball in is a good ball but if he has no movement he does not score."

Boss Solskjaer was also impressed. "He's a centre forward who thrives on crosses and delivery in the box. He has been in there for so many years, and he's made a difference today."

A natural striker - is this what Man Utd have been missing?

When Manchester United signed Cavani on Deadline Day critics suggested the 33-year-old, who had been a free agent since the summer after leaving PSG, was an expensive gamble, due to the wages he'd command and his age.

But Solskjaer was convinced he would have a positive impact on the young strikers at United and also insisted Cavani would make the difference for the team in key moments, such as on Sunday.

"He'll bring energy, power, leadership and a great mentality to the squad but, most importantly, he'll bring goals," said Solskjaer when Cavani was signed.

Keane believes the risk is paying off with rewards for United after their win at Southampton - and reckons Cavani can now be an important player for them in the season ahead.

"It was always a gamble when he came to the club." Keane told Sky Sports. "People were doubting why he didn't have a club. Did he have the hunger, the desire?

"We've seen clips of him in some other games and you're thinking, 'has he still got it?'

"We've seen proof of it today. He could turn out to be a huge signing for United."