Manchester United progressed to the Europa League final despite a 3-2 defeat on the night in their second leg away to Roma as Ole Gunnar Solskjaer gave a rare start to Donny van de Beek. Did the Netherlands midfielder do enough to take the opportunity?

"I still cannot get my head around it," Gary Neville told Sky Sports in January. "It is almost as if that signing was sort of done in anticipation of one of the others leaving because Van de Beek has just sat on the bench for the last few months and he cost £40m."

Four months on from Neville's comments about Donny van de Beek and five since his previous start outside of the domestic cups, Ole Gunnar Solskjaer did name the Netherlands midfielder in his team for Manchester United's Europa League semi-final second leg at Roma.

But did Van de Beek do enough to force the boss into a rethink?

The circumstances might be difficult for him when opportunities are few and far between. Although Solskjaer insists the midfielder "has been really good in training", that cannot quite compare to being thrust into action at the highest level.

It was not a poor performance. It just was not quite enough.

There were some encouraging moments in a 3-2 defeat that was more enough to ensure United's progression to the final against Villarreal as they won 8-5 on aggregate in Rome.

One bursting run behind the defence in the first half led to a chance for Bruno Fernandes. There was a neat flick to Edinson Cavani after the break, then some forceful play on the edge of the Roma box before cleverly backheeling the ball into the path of the Portugal midfielder.

But the headline moments belonged to those two - Cavani with his two goals and Fernandes in setting them up. Van de Beek's moment might have come midway through the second half when he found space in the area. Instead, he failed to control the ball.

When it was over, he had not even had an attempt on goal.

Of course, that has been a feature of his season. Van de Beek has had only one shot in his Premier League career so far - the goal that he scored against Crystal Palace on his debut.

His creativity numbers are slightly more encouraging, although the sample size is small given he has played more minutes for his country this season than in the Premier League.

Van de Beek ranks among the top six players for expected assists from open play per 90 minutes and if that is a metric that sounds designed to confuse, consider the small pool of players who outrank him includes Fernandes, Jack Grealish and Riyad Mahrez. 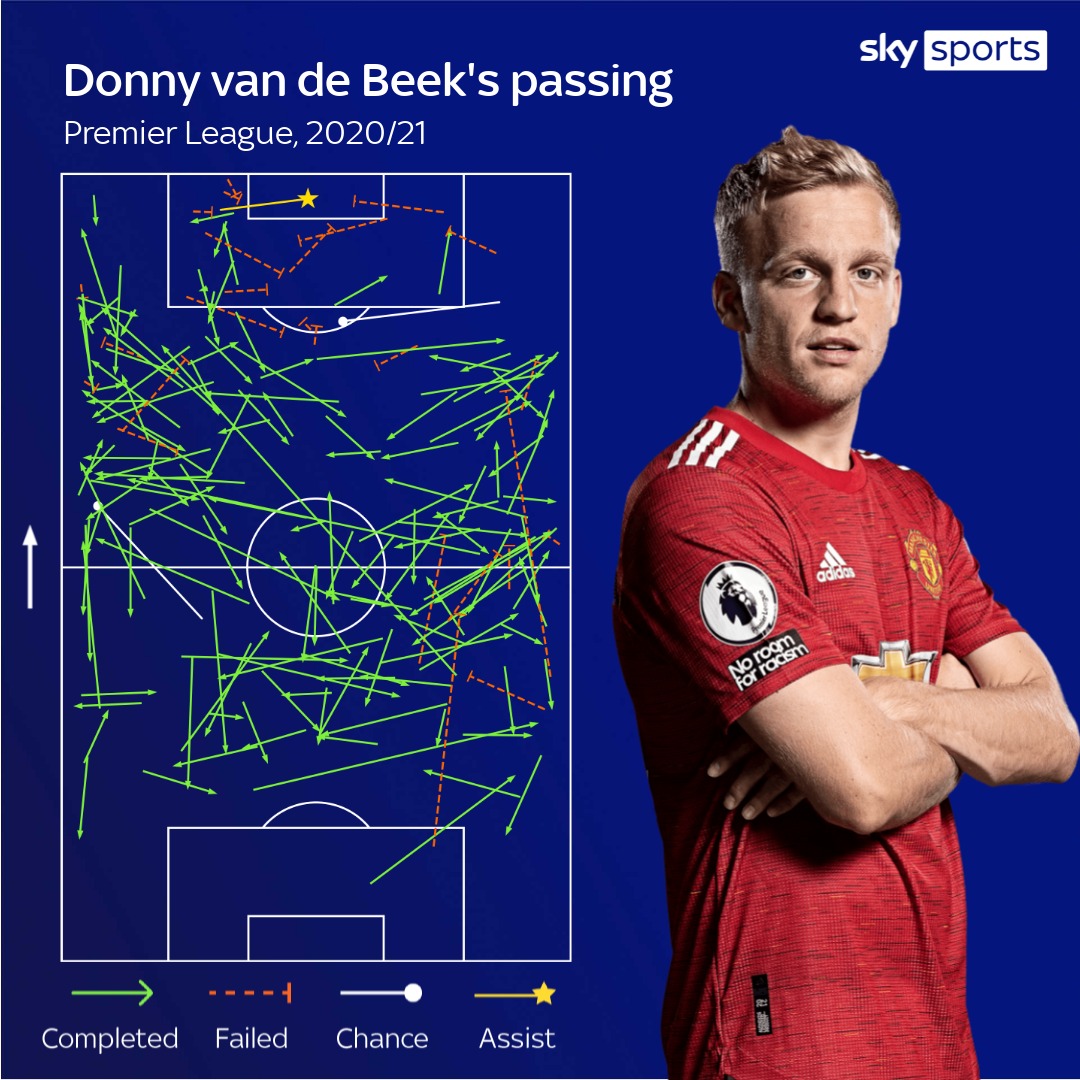 Perhaps that is an indication he is doing something right even if he has been unable to produce the eye-catching moments of his rivals for that playmaking role at Old Trafford.

More likely, Van de Beek is just not that type of player.

The expectation was that he could riff with the great soloists at Manchester United, but the former Ajax player actually has a very different skill-set to that of Fernandes or Paul Pogba.

He belongs in the rhythm section, keeping the beat with his preference for one and two-touch football. With the right role in the right team, that metronomic use of the ball can hypnotise opponents but it is not necessarily an obvious fit for this United.

There was an example five minutes into the game when twice Van de Beek found himself in space inside the Roma half only to quickly lay the ball off with a backwards pass.

It was not the wrong decision per se. But there could be no doubt that in the same situation Fernandes would have turned and been looking to find Cavani with an incisive delivery.

At least he was given the full 90 minutes for only the second time since November - with that previous occasion coming in the third round of the FA Cup against Watford in January.

Speaking to Rene Wormhoudt, the former Ajax fitness coach, earlier in the season about Van de Beek's United prospects, that issue of the physical demands was highlighted.

"He needs to adapt quickly to a new situation and a new intensity of playing," Wormhoudt told Sky Sports. "Not only the matches but also in the training. It is so much more intense than he is used to.

"He is not the man for the duels. He needs to be thinking faster and acting faster than the rest."

As his debut season draws to a close, the noises suggest United are happy with his attitude and would like to see what Van de Beek can bring in his second year. But the feeling persists he will need to be more demonstrative if he is to convince Solskjaer and the United supporters that he is deserving a bigger role.

Pitch to Post Preview: Jamie Redknapp on Man City vs Chelsea; Plus: what next for Arsenal, Man Utd after EL ties, and the top four race

Sky Sports pundit Jamie Redknapp joins Peter Smith to discuss Manchester City and Chelsea reaching the Champions League final ahead of their clash at the Etihad this weekend. He also picks out some standout performers from both sides, explaining how Ruben Dias has transformed City, and praising the rise of Phil Foden and Mason Mount.

Sky Sports football writers Oli Yew and Ben Grounds are also on the show to discuss Arsenal's Europa League exit and Man Utd's progress to the final - and what comes next for both sides, with Mikel Arteta under pressure and Ole Gunnar Solskjaer's side looking to kick on. Ben also assesses the top four race, with some key fixtures coming up, and makes his Pitch for what he thinks will happen in the Premier League this weekend!