If Paul Pogba does not sign a new Manchester United deal by the end of the window, it will not automatically mean he is against signing one in the future; talks between Pogba's representatives and United continue, while PSG remain interested in signing the midfielder

Manchester United midfielder Paul Pogba can see a long-term future at the club - but may not commit to a contract extension in this transfer window.

The France international is said to have a great relationship with manager Ole Gunnar Solskjaer and is excited with the direction the club is going in following the signing of Jadon Sancho and the imminent arrival of Raphael Varane.

Sky Sports News has been told Pogba loves the club, but - at 28 - knows his next contract is likely to be the last big one he signs in his career.

If he does not sign a new United deal by the end of the window, it will not automatically mean he is against signing one in the future. 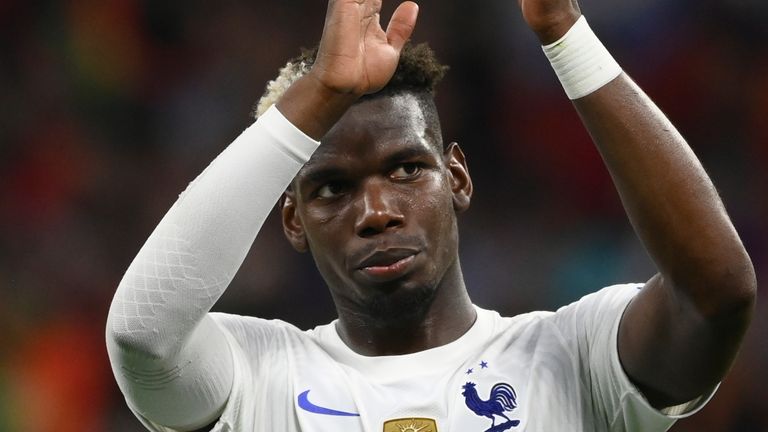 Ideally, United want his situation sorted this summer, but know Pogba can decide his own future given he has entered the final year of his deal.

Talks between Pogba's representatives and United over a new deal continue, while PSG remain interested in signing the midfielder in this window.

While a move to Paris has not been ruled out, Pogba knows he will have more options if he sits tight - one of those options being a new deal at Old Trafford, as well as what is likely to be the pick of Europe's top clubs.

Prospective United signing Varane has looked ahead to "a new chapter" ahead of his transfer from Real Madrid.

The clubs have agreed a fee believed to be worth £41m including add-ons for the France defender, subject to a medical and player terms being finalised.

Varane, 28, is departing after 10 years with Real Madrid, in which he has helped them win four Champions League titles and three La Liga crowns.

"After 10 incredible and wonderful years at Real Madrid, a club that I will always carry in my heart, the day has come to say goodbye.

"Since I arrived in 2011, together we have exceeded all expectations and achieved things that I could never have dreamed of. I would like to thank all the coaches and all the people who work or have worked at the club for everything they have done for me.

"Many thanks also to all the Madridistas who always gave me a lot of affection and with their great demand they pushed me to give my best and fight for every success.

"I have had the honour of sharing a dressing room with the best players in the world. Countless victories that I will never forget, especially 'La Decima' (the 10th European Cup success in Real's history, achieved in 2014). I realise that it has been a great privilege to have been able to experience such special moments.

"Finally, I want to thank all Spaniards and especially to the city of Madrid, where my two children were born. This country will always be special to me."