Man Utd held to 1-1 draw by Southampton; Ralf Rangnick: "The question is how do we get more compact, more aggressive and even more nasty"; Ralph Hasenhuttl: "It is not a big secret that when they lose the ball that the reverse gears are not always the best from everybody" 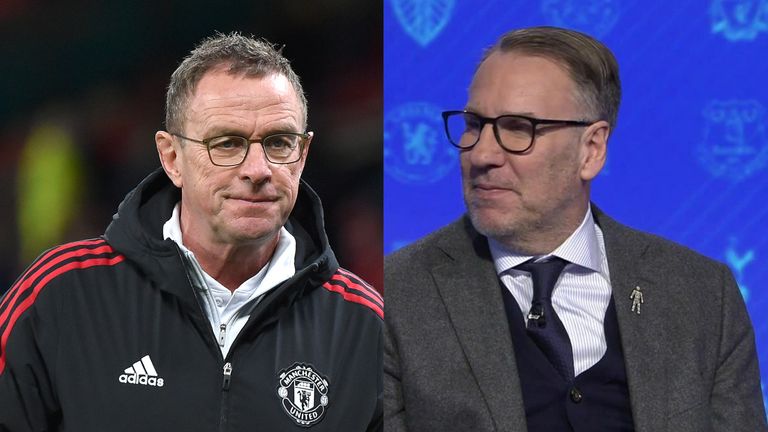 Ralf Rangnick wants more aggression and "nastiness" from his players after Manchester United blew another half-time lead to draw with Southampton.

United's lack of tracking back without the ball was also questioned by Saints boss Ralph Hasenhuttl in his post-match press conference, while former Man Utd midfielder Paul Scholes suggested the players did not want to put in a shift for the club following the 1-1 draw at Old Trafford.

Hasenhuttl said: "It is not a big secret that when they lose the ball that the reverse gears are not always the best from everybody.

"The first half they have shown that they can play well against the ball, they had some good ball wins but the longer the game was going the more they are cheating then in the first line, and then you can play over this first line and you have space then, and you have the chance to create something, and this is what we did."

A year on from Ole Gunnar Solskjaer overseeing a 9-0 win against Saints at an empty Old Trafford, the Norwegian's interim successor saw the Red Devils squander Jadon Sancho's first-half goal on Saturday lunchtime.

Che Adams fired home an impressive equaliser shortly after half-time and Saints had chances to snatch a rare win at United, whose profligacy in front of goal led to a third successive match ending 1-1.

Rangnick rejected Scholes' comments, saying it is more about the group's mentality.

"I think what Paul Scholes said was only one third of what he said - I think he said three different options," said Rangnick. 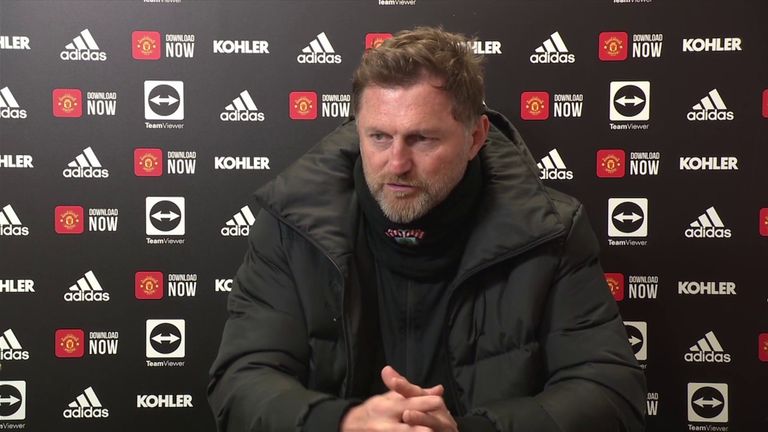 Southampton manager Ralph Hasenhuttl says that Manchester United are not the best when tracking back when they lose the ball, after the Saints earned a draw at Old Trafford on Saturday

"I don't think that the players are not willing to do that, because they don't like to give away points like the ones they gave away today again.

"It was the third game where we were 1-0 up and I don't think anyone out there should believe that the players don't care, that they like to experience things like that today consecutively. This is definitely not the case. 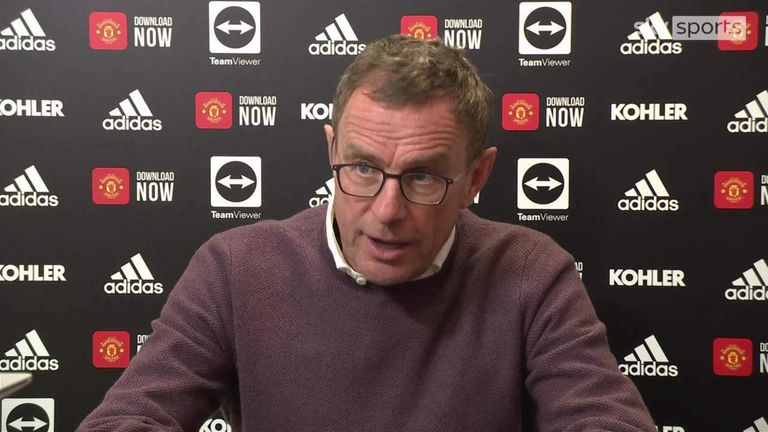 "The question is with the group of players we have, how do we get more compact, more aggressive and even more nasty, it's about defending a lead. This is the major issue but it's not a question of the players not wanting to do that."

'Not difficult for Burnley or Southampton to score' 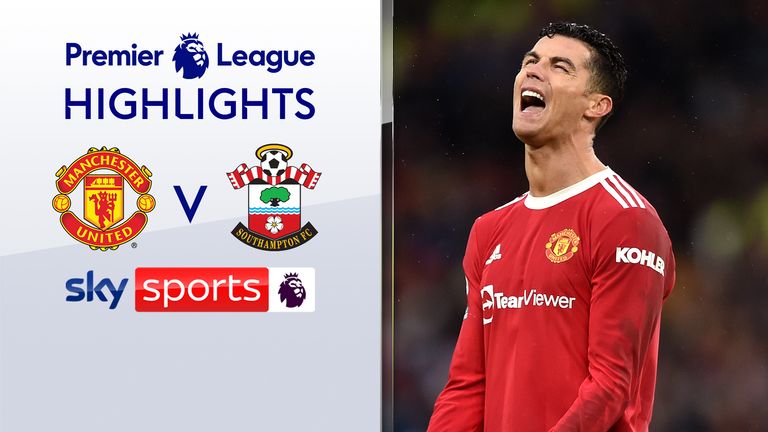 FREE TO WATCH: Highlights from Manchester United's draw with Southampton in the Premier League

When picked up on his comment about 'nastiness', Rangnick added: "They can be tough but the question is for what period of time and in which moments.

"Again, if I see the game, the goal we conceded today, quite like at Burnley, it's just too easy. It's too easy.

"It was not even difficult for Burnley and today for Southampton to score these goals, and against Middlesbrough it was similar.

"If you are being counter-attacked after being 1-0 up, this is also a question of tactical discipline and being aggressive in the decisive moments and just don't allow the players to go past you."

"Our team with a lot of technical players, with a lot offensively behaving and thinking players, for them it is difficult to stay compact for a longer period of time, for the whole game," he said.

"This is one of our problems. The other is that we don't take enough advantage of the chances that we create.

"No. One-hundred per cent [Rangnick won't be in charge of Man Utd next season]. I've got as much chance of being in charge. I just don't see it.

"I read something that said they have improved. I don't see that. I don't see the happiness there. I hear so much coming out of Man Utd, at the moment, which is just extraordinary. It never happened before and that's my worry.

"I don't see him being there and the way it is going at the moment, if they don't get in the top four, I'd be shocked if he went upstairs. I know that was part of the deal, but I don't think it's a good thing. I think this needs to be nipped in the bud sooner rather than later at Manchester United.

"I just can't believe what they are doing. Just waiting until next season to bring in a new manager, there is a lot of work to be done. This is not just bringing a new manager in and lets go again next season. They are a million miles off and things have to change very quickly.

"I'd have had someone in as soon as possible. You pay £70m to £80m for football players and some of them don't even play. Why wouldn't you break the bank for managers, if you need to get a manager out of a club. In my opinion, they are very important.

"Some people might say they are not important but for me, they are a must. A great manager makes a great team."

Seaman: I don't know why Man Utd don't work their socks off

Speaking on Super Sunday Matchday, former England goalkeeper David Seaman said he cannot understand why Manchester United don't "work their socks off" to recover possession when they lose the ball.

"As soon as you lose the ball you have to work your socks off to get it back," Seaman told Sky Sports News.

"You look at Man City, as soon as they lose the ball, there are always three or four of them trying to get round to get the ball back. It's a given, and I don't know why we don't see that on a matchday with Manchester United.

"I find it hard that Rangnick would not have addressed that. I think it is more of the attitude with the players on the pitch than what it is in training because they'll be made to work and they'll have certain ways of playing.

"You look at the goalkeeper, who is at the top of the saves league and it's De Gea. That tells you everything you need to know. The defence is not tight as it should be."

"It started with an FA Cup exit and two 1-1 draws in the Premier League, and in all three games they took the lead but failed to win the game.

"It's a recurring problem for United and one that Rangnick doesn't have the answers at the moment as they suffer another big blow in the race to finish fourth.

"Meanwhile, Southampton roll on with another impressive result. They looked by far the better side at Old Trafford, knocking the ball around with confidence all throughout the game.

"Ralph Hasenhuttl is doing a tremendous job with Saints and the Southampton fans won't like me for saying this, but could he be a good fit for Manchester United? His team are organised, play with plenty of energy and they look superb on the ball. Everything that Manchester United don't, at the moment."

Hasenhuttl: 'I think the guys love to play football in the moment'

Rangnick will hope for a response when United host Brighton on Tuesday night, while former RB Leipzig colleague Ralph Hasenhuttl enjoys some well-deserved downtime after a memorable few days.

Adams followed up Wednesday's match-winner in the 3-2 victory at Tottenham with the leveller at Old Trafford, where Saints impressed for large parts.

"It is enjoyable to watch and I think the guys love to play football in the moment," said Hasenhuttl.

Hasenhuttl added: "Every week they are really switched on and I think we have shown that we can play a good game. From 0-9 to 1-1, I think that is more than enough! It was nearly one year ago we lost here in a game where we had no chance.

"But we are a different team, we have now much more options with all the players we tried to keep at the club and signed in the summer.

"I think we had a good transfer window and the rest is about working every day on your habits and qualities. I think we have shown we are getting better."