Maurizio Sarri is confident Eden Hazard will stay with Chelsea this season and expects to resolve Ruben Loftus-Cheek's future in December.

With the European transfer window not closing until August 31, Hazard has been linked with a summer move to Real Madrid.

The European champions have already brought goalkeeper Thibaut Courtois over from Chelsea, but Sarri was able to recruit Kepa Arrizabalaga for a world-record £71.6m before the Premier League window closed.

With Chelsea unable to replace Hazard, Sarri confirmed he expects the Belgian to remain at Stamford Bridge for the remainder of the campaign, and added that the playmaker is in line to start at Newcastle on Sunday - live on Sky Sports Premier League.

Sarri said: "Eden is ready for 50-60 minutes. I don't know for 90 minutes, but he can start. I am happy with him. He wants to play. It's the right way to think for him, but I have to think for everybody. 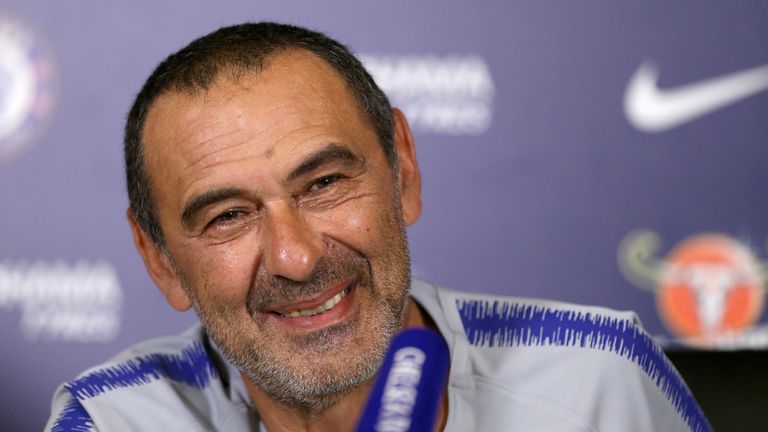 After Antonio Conte reportedly banned Chelsea players from eating ketchup, new boss Maurizio Sarri laughs off a question after the sauce made its long-awaited return

"I think Eden will stay with us for all of the season."

Loftus-Cheek's future remains uncertain after the England midfielder was left out of the squad to face Arsenal last weekend.

Chelsea blocked Crystal Palace's attempts to bring Loftus-Cheek back on loan earlier this August, while Schalke are not interested in signing the 22-year-old, contrary to reports.

Sarri added: "I have spoken with him twice this week, after I spoke with the club. I think Loftus will remain with us, we can speak again about his situation, but I think only in December."