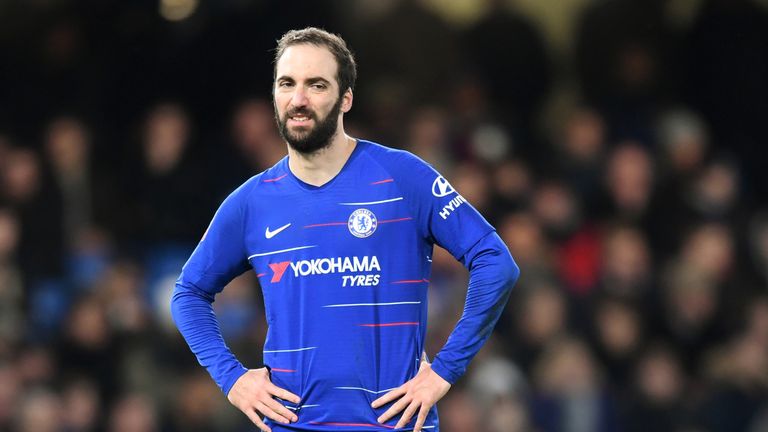 Maurizio Sarri is confident Gonzalo Higuain can become a regular goalscorer for Chelsea, but says the striker needs to improve his "acceleration".

Higuain joined the Blues on loan from Juventus in January, cutting short a temporary spell with AC Milan in order to make his first move to the Premier League.

However, he has found the net just twice in seven matches since moving to Chelsea - both goals coming against bottom-of-the-table Huddersfield - and Sarri believes he needs to work on his physical condition.

He said: "I think the contribution was really very good in the last match [against Tottenham]. He was able to play with team-mates very well.

"Now he needs more acceleration, because now he is a little more resistant, but without the accelerations he had in Naples.

"So I think he needs to improve in the physical condition, and then he will be able to score."

Sari dropped his first-choice goalkeeper Kepa Arrizabalaga for Wednesday's 2-0 win over Spurs, following his refusal to be substituted during the Carabao Cup final on Sunday.

Back-up 'keeper Willy Caballero kept a clean sheet against Spurs, and Sarri has not yet decided if Kepa will return against Fulham on Sunday, live on Sky Sports.

"The Kepa situation now is closed. Kepa is our first goalkeeper," insisted Sarri. "But we are very happy for Willy, because now we know very well he is able to play in a very difficult match.

"I am sure in one of the two next matches, Kepa will be on the pitch."

When asked if he had decided who will start at Craven Cottage, Sarri said: "No, not yet. I want to see the last two trainings."

Chelsea will be the first opponents for Fulham's new boss Scott Parker, who replaced the sacked Claudio Ranieri on a temporary basis on Thursday.

Fulham are 19th in the Premier League - 10 points from safety - but, while he has sympathy for his countryman Ranieri, Sarri is wary of the threat their London rivals may pose.

"It was a very difficult situation from the beginning, I think. He [Ranieri] was unlucky," said Sarri.

"The situation now is difficult, but I think they also have opportunities for saving themselves. We have to play a very difficult match - a derby. We need a very good performance in this match.

"Usually when there is a change of the coach, there is a reaction. Then it is very difficult for us to prepare the match because we don't know the new system, the new ideas."