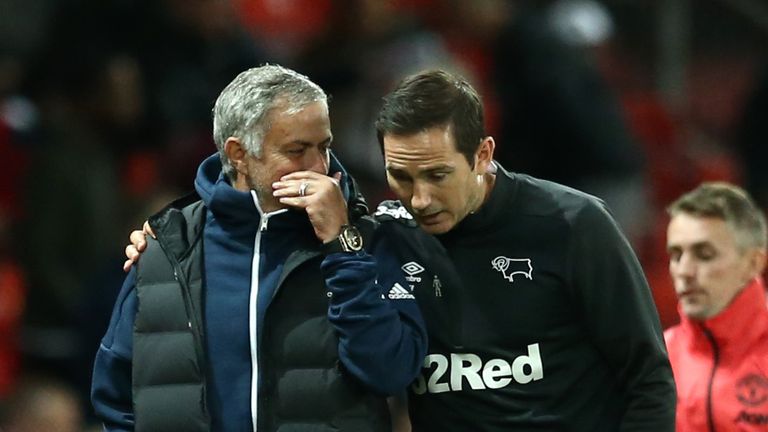 Frank Lampard admits Jose Mourinho has influenced his managerial style more than any other boss – but insists he is still his own person.

Despite also playing under Claudio Ranieri, Luiz Felipe Scolari, Carlo Ancelotti, Rafa Benitez and Guus Hiddink, it is Mourinho who made the biggest impression on the fledgling Chelsea boss.

"I've been influenced by all the managers I've played under but probably Jose (Mourinho) as much, if not more, than anyone else," Lampard told Sky Sports News.

"He was the one at the point of my career when my performances and mind set got better, giving me a lot of confidence within the team.

"So I try to act like that with my players now, trying to have a personal relationship with them which means driving them every day to be better, trying to help them to be confident and understand what they need to do to keep going up the levels as a player.

"So I took a lot from Jose but I certainly don't want to be typecast as trying to be a Jose person because I am my own person."

This weekend's Super Sunday will be focused on England's capital with 'London Calling' taking over Sky Sports.

We'll have two games from London live and exclusive, starting over in the east of the city as West Ham host Manchester United with coverage starting on Sky Sports Premier League at 1pm and kick-off at 2pm.