Kai Havertz 360: The view from Chelsea, Bayer Leverkusen and the Germany forward 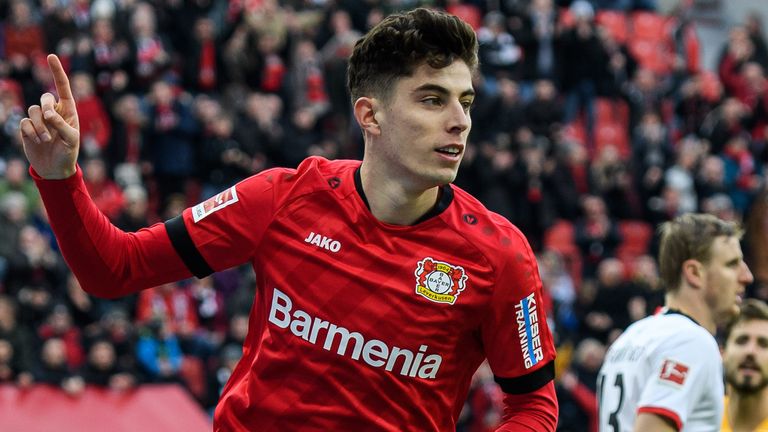 Chelsea are making progress in talks to sign Kai Havertz and all parties are hopeful a deal can be agreed. Here, we look at the deal from the three different points of view - Chelsea, Bayer Leverkusen, and the player and his representatives...

The view from… Chelsea

As is so often the case, negotiations are being held up by disagreements over price and payment structure. When it comes to the player, personal terms will not be a problem for Chelsea - they rarely are for big clubs when it comes to big deals.

Chelsea are offering a deal worth a total of £70m, whereas Leverkusen value Havertz at £90m. Chelsea's negotiations are being handled as always by Marina Granovskaia, who effectively runs the club on behalf of the owner Roman Abramovich.

Granovskaia is known as the "Iron Lady" in the German media and she has a reputation there as a very tough negotiator who always protects the interests of her club.

Petr Cech also now plays a big role in transfers having returned to Chelsea as the technical and performance adviser last summer. After the problems behind the scenes with previous managers such as Antonio Conte and Maurizio Sarri, Cech now acts as a bridge between the people who run the club and the people who run the team.

Frank Lampard is close to Cech and he made it clear during last season that he needed to make big changes to his squad. Chelsea have already backed him by signing Hakim Ziyech and Timo Werner, and more players are on the way.

The departures of Willian and Pedro will mean Chelsea will have a new-look forward line next season. On paper Havertz, Werner and Ziyech looks like a world-class front three which could re-establish Chelsea as genuine title contenders, while they also have Christian Pulisic.

Clubs like Real Madrid and Barcelona also wanted to sign Havertz but at the moment Chelsea are the only club who are in talks with Leverkusen. The impact the pandemic has had on club finances means Chelsea - thanks to Abramovich's backing - can outbid their rivals for the best players in the world this summer.

Chelsea and Leverkusen remain about £20m apart on their valuation of Havertz and talks are continuing to try to bridge the gap. That is the only thing that is holding up the deal. You could argue that even if Chelsea do pay the full £90m asking price, they will getting a good deal. Havertz is only 21 and if he keeps developing the way he has been he could be worth a lot more in the future.

Last season a transfer ban meant Lampard had to give youth a chance and rely on the players he inherited for his first season as Chelsea manager. Now he has the chance to build his own side in his own image, and Lampard wants the deal for Havertz tied up as soon as possible.

The view from… Bayer Leverkusen

Rudi Voller was an exceptional striker and he is turning out to be a pretty good salesman too. The former Germany forward is the Leverkusen managing director and he has been doing a good job of talking up his club's most valuable asset.

According to Voller, Havertz is Leverkusen's best ever player, which is a pretty bold claim considering the likes of Michael Ballack, Toni Kroos, Bernd Schuster and Voller himself have all played for the club.

To be fair to Leverkusen, they have been consistent all along as far as Havertz is considered. They know he has only two years left on his contract and they have made it clear that they will let him go as long as they receive their £90m.

That is an important number for Leverkusen because it converts to €100m - and that is the price they set for all interested clubs. But failing to qualify for the Champions League will have a big impact on Leverkusen's finances next season, and that could give Chelsea a bit more room for manoeuvre when it comes to negotiating the payment structure.

Leverkusen have let it be known that there is no question either of Chelsea getting a so-called "corona discount". Prices may have dropped in the market because of the coronavirus pandemic but Leverkusen are not willing to factor that into the negotiations even though the bidding war they had hoped for has failed to materialise.

So they are trying to hold out for €100m but, realistically, Chelsea know they are the only serious bidders at the moment. A compromise deal could be on the cards whereby, with bonuses and add-ons, Leverkusen can claim to have got their asking price while Chelsea will be paying significantly less to begin with at least.

Ideally Leverkusen would like Havertz's future to be sorted out before their players are due to report back for pre-season training at the end of the month but Sky Sports News has been told that is not a deadline set in stone. Leverkusen would not be in a position to turn down big offers for Havertz if they arrived later in the window. They have accepted that Havertz will leave this summer, and now they want to make sure they get what they think he is worth.

The view from… Kai Havertz

Havertz himself wants to play for Lampard and Chelsea. He has always dreamed about playing in the Premier League and he wants his dream to come true as soon as possible.

One source has told Sky Sports News that the player actually wants to move to Chelsea even more than they want him. When you consider that he is Chelsea's number one target at the moment, that demonstrates how much he wants to play at Stamford Bridge.

He will become one of the highest-paid players at Chelsea if the move goes through and he feels he has the character and ability to make his mark in English football.

There was never any question of Havertz agitating for a move earlier this summer, not even in June when he watched his Germany team-mate Timo Werner sign for Chelsea in a £53m deal. Havertz knew how much the Europa League meant to Leverkusen because they could have qualified for the Champions League if they had won it.

Once they were knocked out of the competition by Inter Milan earlier this month, his thoughts turned back to Chelsea. After 10 years at Leverkusen, it is time for a new start.