Romelu Lukaku: Chelsea forward to train on Tuesday ahead of Arsenal clash

Chelsea's £97.5m striker will train on Tuesday after a quarantine period; Romelu Lukaku, who re-joined Chelsea from Inter Milan, is expected to be involved against Arsenal on Sunday, live on Sky Sports Premier League

Romelu Lukaku is expected to be be involved for Chelsea against Arsenal on Sunday, live on Sky Sports Premier League.

Lukaku will train with his Chelsea team-mates for the first time on Tuesday after a quarantine period following his club-record £97.5m move from Inter Milan.

He returned to Chelsea this week, 10 years after he first signed for the club as a teenager from Anderlecht.

The striker struggled to make an impression during his first spell - failing to score in 15 appearances - and moved to Everton in 2014 before joining Inter, via Manchester United.

But after two outstanding years at Inter, scoring 24 goals in Serie A last season to help them to their first Italian title in 11 years, Lukaku said returning to Chelsea was the "chance of a lifetime".

He had previously said he would remain at San Siro for the 2021/22 campaign but changed his mind and asked Inter to arrange to sell him to Chelsea after it became clear the club wanted to make his return a reality.

A decade on from first arriving in west London, Lukaku has returned to Chelsea as one of the globe's leading goalscorers - and intends to assert that authority.

"I just feel more complete; I've tried to master all the facets that a striker needs and I just want to keep improving on the small details all the time and keep improving on my strengths as well," Lukaku told Chelsea's official club website.

"I just want to try to help the team win and be available for the manager as well as for my team-mates. I want to make sure that they feel comfortable and they can lean on me in whatever situation we're in.

"The two years in Italy helped me master all the facets of the game for a striker and now I'm ready." 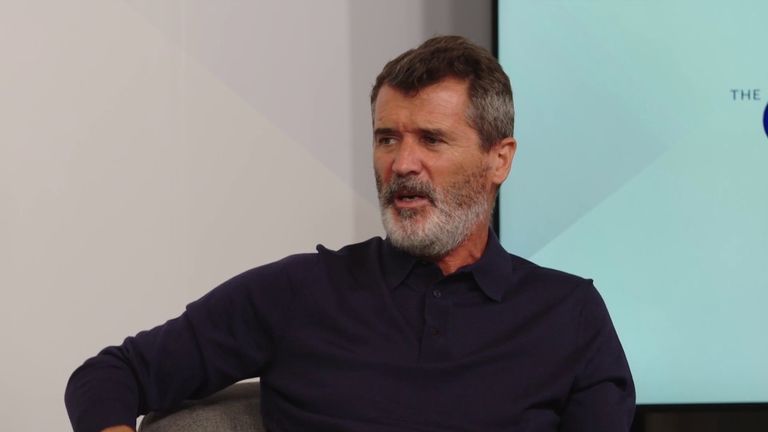 Speaking on the Overlap fan debate, Roy Keane says the signing of Lukaku gives Chelsea a great chance to win the Premier League title this season

Chelsea expect Lukaku's prolific finishing ability to add a new predatory instinct to a Blues squad that squandered a host of gilt-edged opportunities last term, and Lukaku is confident he can fill any central role required of him by Thomas Tuchel.

Asked what he has discussed with the Blues boss, Lukaku said: "The conversation was really clear from him, that he wants me to be a presence and a leader in the team.

"I have to just use all my abilities to make sure I can help the team as much as possible.

"I like the system that we play and I'm very flexible. I can play as a two or by myself and I'm used to the system because it's what we play with the Belgian national team so I don't need much time to adapt.

"It's just knowing the strengths of my team-mates in important positions and knowing what we do off the ball, then I can do the rest.

"It's not like I'm a new player coming in and not quite knowing what to expect. I know the league, I've scored a fair amount of goals here but the past is the past and now we have to look forward.

"I'm a new version of that player from before. I've evolved and the team that I'm joining is a very strong team so now we just have to prove it on the pitch by challenging for the Premier League."

He completed a medical on Sunday ahead of a £34m move.

Talks progressed positively after Roma general manager Tiago Pinto met the striker in London on Thursday, and the Serie A side believe he will be a key part of boss Mourinho's plans.

Abraham is expected to sign a five-year contract worth £4m a year after tax.