Jordan Henderson, playing at centre-back where Liverpool have had so many injury problems this season, came off just before the half-hour mark at Anfield; he was replaced by 23-year-old defender Nat Phillips; boss Jurgen Klopp says "no one in the medical department was positive about it" 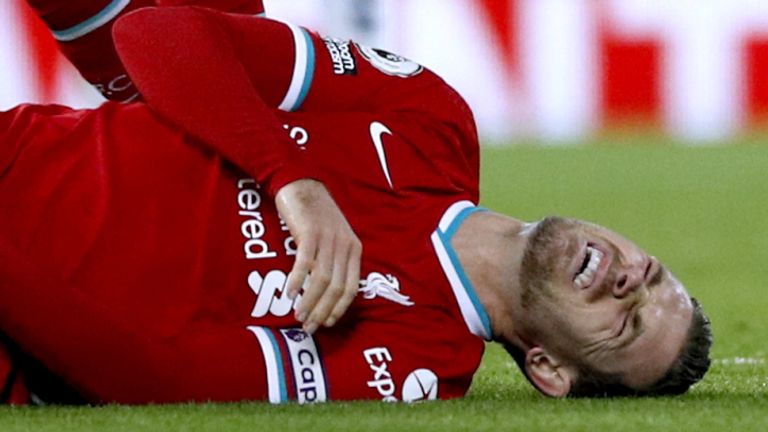 Jurgen Klopp says Jordan Henderson's injury "doesn't look good" after he was forced off with a groin problem in the 2-0 defeat by Everton at Anfield on Saturday, with the Liverpool captain set for a scan.

Henderson, playing at centre-back where the Premier League champions have had so many injury problems this season, was replaced by Nat Phillips just before the half-hour mark.

The England international appeared to tweak his groin after running past Abdoulaye Doucoure in the 26th minute, and while he initially tried to continue, he was forced off a couple of minutes later.

"It was in the groin, adductor region," Klopp said on Saturday. "It doesn't look good. The rest we will know tomorrow. No one in the medical department was positive about it, but we have to wait for the scan tomorrow [Sunday].

"It's a massive blow to lose Henderson. But unfortunately we have got used with having to change things. We will set up again for the next game, as long as we have 11 players we will do that."

Henderson was filling in at the back with Liverpool's first-choice centre-backs Virgil van Dijk, Joe Gomez and Joel Matip all out with long-term injuries.

Fabinho, who has deputised at centre-back for most of the season, was also absent for the derby against Everton with a muscle problem.

Van Dijk, who sustained ligament damage in the corresponding fixture in October, was watching from the stands as Henderson was forced off with injury.

Everton took an early lead at Anfield through Richarlison, who now has 10 goals across all competitions this season. Gylfi Sigurdsson then wrapped up the win late on from the penalty spot as Everton claimed their first win at Anfield since 1999, while Liverpool have now equalled a club record of four consecutive home league defeats.