Trent Alexander-Arnold in midfield? Experiment with Liverpool player did not work for England against Andorra

Trent Alexander-Arnold started in midfield during England’s 4-0 win over Andorra but the experiment did not last long. There is a belief that his future lies in the middle but is that based on flawed logic? We take a look at the argument – and the stats… If there is a time to experiment it is at home to Andorra when clear at the top of a World Cup qualifying group. But Gareth Southgate’s decision to play Trent Alexander-Arnold in midfield lasted only 45 minutes before he was returned to his right-back role.

There was a loose touch where he lost possession and a run into the box where he failed to keep the ball in play, but it was not that Alexander-Arnold played poorly. The issue was the supposed benefits of moving him into midfield just were not apparent.

Southgate had spoken beforehand of his hope that Alexander-Arnold would be "a little bit more comfortable in those areas than he was last year" having been drifting inside regularly for Liverpool in the early parts of this season. But it did not go quite as planned.

Highlights of the match between England and Andorra from Wembley

The calls have always been there ever since the Liverpool youngster made his breakthrough, so impressive has he been going forwards. Alexander-Arnold's creativity is such that only Kevin De Bruyne has delivered more Premier League assists in the past four seasons.

The logic is straightforward. If there are concerns over his defensive play - and Southgate was worried enough to drop Alexander-Arnold from his squad in the spring - then why not release him from those obligations and unleash his true offensive capabilities?

"He should be playing, like he did as a kid, in midfield," argued former England striker Gary Lineker just last month. "(Philipp) Lahm switched, (Joshua) Kimmich too. The best players should be in a position where they can more frequently use their brilliance."

Perhaps the first problem is that this is based on a false premise. The full-back role has evolved so much it is no longer a given that the nominal move to midfield will automatically allow a creative player to 'use their brilliance' more frequently.

Liverpool are the perfect example of that. Much of the attacking play from Jurgen Klopp's team comes from those wide positions with the role of the players in midfield to recycle possession rather than orchestrate the attacks. It is reflected in the statistics.

Alexander-Arnold averaged over 100 touches per 90 minutes for Liverpool last season. That was far more than Liverpool midfielders Naby Keita and Georginio Wijnaldum, who saw much less of the ball. It was even more than famed midfield playmaker Thiago Alcantara.

Against Andorra, in a game that England completely dominated throughout, Alexander-Arnold had a taste of why that is the case. Playing in midfield requires different movements to find space and with bodies all around him, he struggled to free himself.

In fact, there was a 10-minute period in the early stages of the first half in which he had only two touches of the ball - and one of those was a throw-in. In total, he had 33 touches in that opening 45 minutes. But Reece James, at right-back, had 52 of them.

If the idea was to ensure Alexander-Arnold was on the ball more, here was clear evidence it did not work. But it is not just the quantity of touches that Southgate had in mind when moving him into midfield - it is the quality of those touches.

Playing him in what the England manager described as "a more advanced role" might have meant Alexander-Arnold picking up the ball in more dangerous areas more often. Here too, that did not really prove to be the case. His touches came in very similar zones. 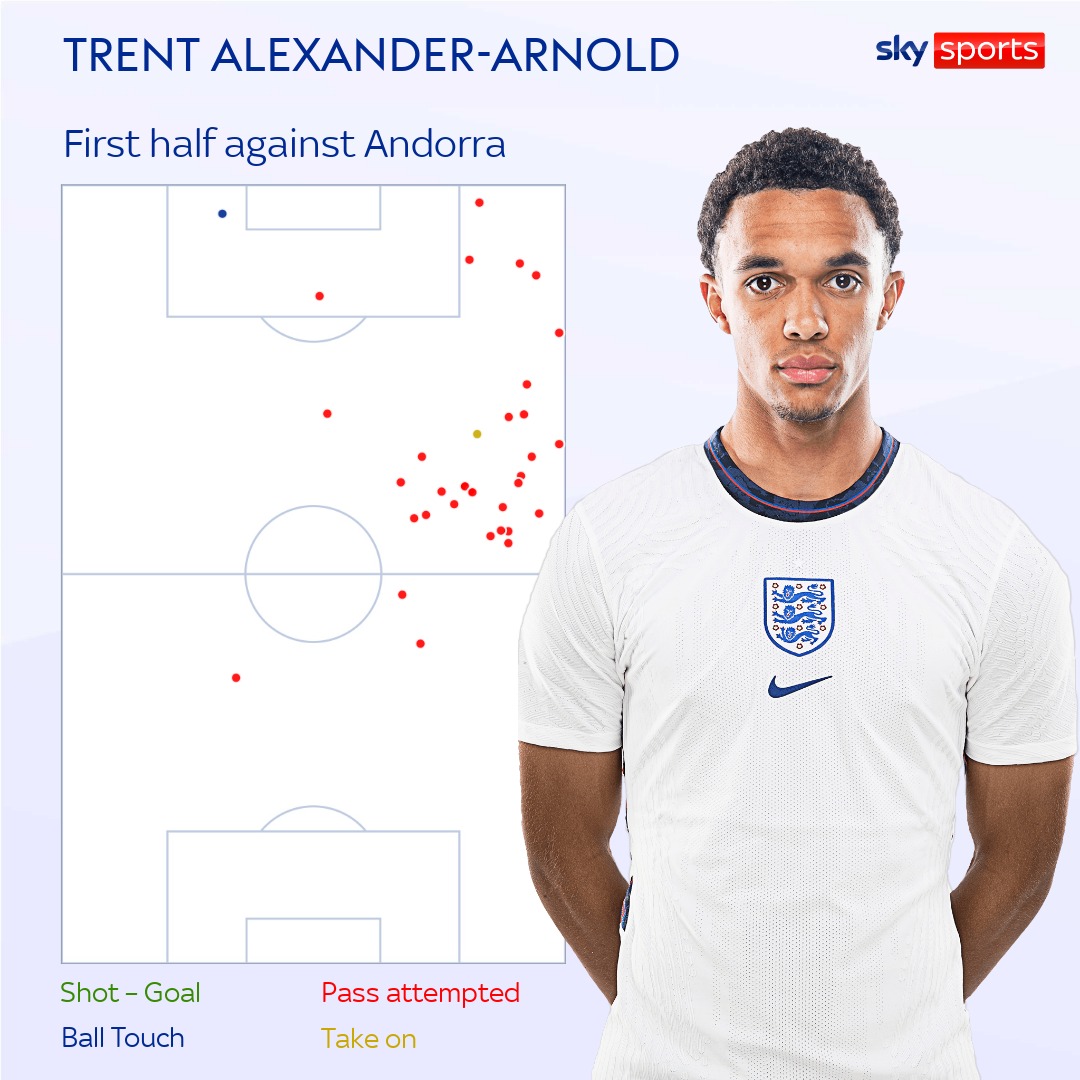 Southgate had acknowledged beforehand that "he has got to play the role his own way" by picking up those familiar positions. "We are quite happy for him to drift wide and play those killer passes that he does," he explained. Unable to find space, that is what he did.

Aware the situation was not ideal and in an attempt to "get more from Trent" as well as others, Southgate tweaked the system at half-time with James moving into midfield. "I thought Reece played that pivot role very well, hitting the bar."

Almost immediately, Alexander-Arnold appeared more effective too and might have been rewarded with an assist late on after beating his marker and laying the ball into the path of Jesse Lingard only for him to be denied his hat-trick by a smart block.

Southgate defended his decision afterwards but acknowledged the obvious. "It is inevitable he looked more comfortable at right-back given how much he has played at right-back but we wanted to see something and we felt this was a good game to look at it," he said.

"In the second half, he was in positions where he felt more comfortable, coming onto things and looked happier in that position. His play with the ball exhibited that happiness."

Is that the end of the experiment, then? Perhaps not. As alluded to by Southgate, the interplay with Harvey Elliott at Liverpool might yet lead to a subtle evolution of Alexander-Arnold's role at Anfield anyway. With work in training, he has the capabilities to adjust.

But this latest foray into midfield might just challenge the view that the benefits of the switch are clear. As Sky Sports' Jamie Carragher pointed out when replying to Lineker on the subject of that prospective new role, there is more nuance to it than that.

"Full-backs get more of the ball than anyone and a bit more time on it to pick out their passes. The way Klopp sets up he is virtually a midfielder in possession anyway. The amount of assists he gets means it would be mad to change his position."

Events at Wembley on Sunday are unlikely to alter that view.