Mohamed Salah spared Liverpool's embarrassment with a late equaliser as last season's runners-up were held to a 2-2 draw at newly promoted Fulham in their Premier League opener; Aleksandar Mitrovic scores both goals for hosts as Darwin Nunez opens his Premier League account 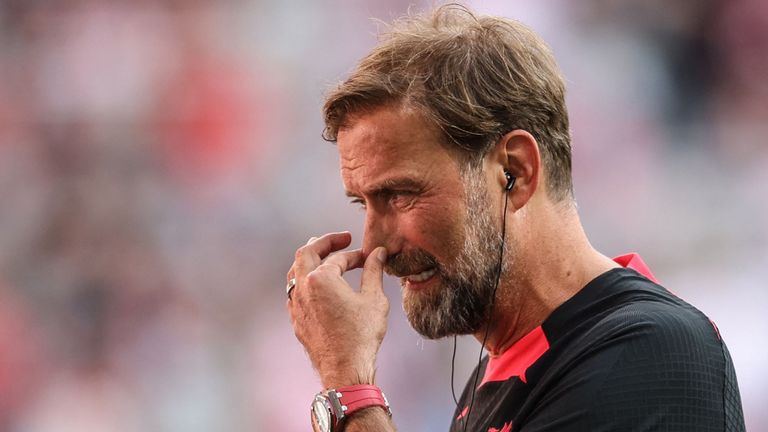 Liverpool manager Jurgen Klopp says some of his players came back from international duty with injuries which have affected their pre-season preparations.

Jurgen Klopp admitted Liverpool's performance in the 2-2 draw with Fulham on the opening weekend of the Premier League season "was a defeat", with the best aspect of the day being the result.

Fulham have proven difficult opponents for Klopp's side in recent years - the Cottagers now unbeaten in their last three top-flight meetings - and Liverpool had to come from behind twice to cancel out two goals from Aleksandar Mitrovic.

The Serbia striker has notoriously struggled for goals in the top division but showed no sign of any issues against the Reds, opening his account for the campaign in the 32nd minute.

Darwin Nunez cancelled out Fulham's lead with a cleverly improvised backheel just after the hour mark. However, a Mitrovic penalty restored the home side's advantage.

But not all was lost as Nunez then set up Salah - who calmly slotted home Liverpool's crucial equaliser with 10 minutes left in the game.

The Liverpool manager said afterwards: "The best thing about the game was the result. We got a point from a really bad game. The result was fine, I don't think we deserved more than that. The performance can be massively improved.

"We could have won the game because we had good chances but it was probably a bit too much today.

"We started in exactly the opposite way that we wanted. We had to break lines but we played into their hands. We didn't find a way into the game and then we were overplaying.

"We are used to more dominance but we couldn't get that as we weren't quick or precise enough. The best thing about this game is the result so I'm fine with the point.

"I'm happy for the punishment we got. We could've lost three points but in the end, we lost two.

"The performance was a defeat, the result wasn't. We have to learn from what happened today, but I don't want to take anything away from Fulham. They did really well. The truth is we played a really bad game and got a point.

"It's my responsibility to find out why we played a really good game against City [in the Community Shield] and then we play seven days later a game which is completely upside down. It's up to me to find out why."

The warning signs were there for Klopp as Liverpool struggled to get going and string passes together early on, before being caught on the break.

Although they grew into the game, it was far from a composed Reds performance, while Fulham looked completely different to the side which shipped 10 goals in their opening three Premier League matches in 2020-21.

Liverpool's frustrating afternoon was compounded by Thiago Alcantara being forced off just six minutes into the second half with what appeared to be a hamstring strain as he clutched the back of his left leg.

FREE TO WATCH: Highlights from the draw between Fulham and Liverpool

Klopp dismissed the need to seek midfield reinforcements in what remains of the summer transfer window, however, adding: "I knew this would come up. It's clear we said we don't need a midfielder as we have enough. We actually do have enough. The problem now is we have been punished for something which is not our responsibility.

"Things like this can happen. There's nothing we could do about this. Naby (Keita) is ill and maybe he'll be back next week. (Alex) Oxlade-Chamberlain is out. With Thiago, it's not good but we will see. A transfer must make sense, now and in the long term.

"We still have eight midfielders, just some of them are injured at the moment. It's not a good situation at all, but we won't panic. We have to see how we react."

Fulham were good value for their point.

In Mitrovic, they have a striker who has a point to prove at this level as well as his manager, as they have both been somewhat unfairly dismissed as a focal point capable of scoring goals among the elite.

Mitrovic restored Fulham's lead from the penalty spot just as Liverpool looked to be pushing for a winner, and Silva was delighted with his overall contribution.

"Mitro is the top goalscorer for his national team, who will be at the World Cup," the Fulham boss said. "He was decisive in qualifying - unfortunately against Portugal - but Mitro has his own profile. It's up to us to get the best from him. He has to do both parts of the game, but we trust in our philosophy.

"We have to respect Liverpool but of course do our job and trust ourselves, we did a great first half, almost perfect the way we controlled and blocked. Second half we matched them every time.

"I know the quality Mitrovic has and I'm here to take the best from my players, Mitrovic is not just goals, he puts on the constant pressure and the overall job he did is fantastic."

Since the start of last season, Mitrovic has scored 45 goals in English league football, 16 more than any other player. Indeed, he is the first player to score two goals for a newly-promoted side on the opening day of a Premier League season since Steve Mounie for Huddersfield against Crystal Palace in August 2017.

"For me, it's not important what people say about him," Silva added. "What's important is that I am working with all the players. People have been expressing what they like [about his record].

"We need to keep providing for him the chances in the box. Mitro is not just a goalscorer for us. What he did without the ball was unbelievable, the way he pressed and came back to help out as well. He ran 30 or 40 metres to win the penalty for us. I'm really pleased for him because he deserved it."

''If you ask me that we deserve something more, than yes we do. Liverpool had more control of the game but I think that our organisation and our great first half meant we deserved this. We have great individual quality.

"In terms of our first half, it was almost perfect. We played sometimes in the first half with 30 or 40 metres behind us. We matched them, and you know that. Without the ball, they're really aggressive, and we matched them from the first minute to the last.

"It's important because we came from a great season, and you can feel it in the stadium. I told the fans to play always with us as the 12th player and they did it in a fantastic way this afternoon. It's important to start with a good result.

"The three points would've felt much better but we showed the right attitude, the right commitment and desire from the first minute. The Premier League for me, and you all know as well, is the most difficult competition in the world.

"What Liverpool did last weekend against the champions of this country shows that we are ready to fight. We have to keep going."

The first Monday Night Football of the season sees Liverpool host Crystal Palace on August 15. Coverage starts at 7pm ahead of an 8pm kick-off, live on Sky Sports.