Mesut Ozil insists he is focused 100 per cent on his role at Arsenal, despite reports linking him with a move away from the Emirates.

Mesut Ozil says he is focused on giving his all for Arsenal amid the constant speculation linking the midfielder with a move away from the Emirates.

The German midfielder is in the final year of his contract at Arsenal, with several newspapers last week claiming he told team-mates he would be making a January move to Manchester United.

However, Ozil told fans to "ignore the noise" regarding the persistent rumours, indicating his mind was focused only on last weekend's match against Everton.

A man-of-the-match performance followed from the 29-year-old, and he subsequently received praise from owner Stan Kroenke, who told the Daily Telegraph of his desire to keep both Ozil and Alexis Sanchez.

"It's very nice to hear that [Kroenke's comments] and to see that - he's the major shareholder," Ozil told Sky Sports.

"I'm happy here, and I do my job to 100 per cent as I always have. I give everything and leave it all on the pitch for the team.

"The most important thing is football. I want to give everything, 100 per cent for this club. It's important for me to give my all and enjoy playing as well. Whatever else happens, we will see in the future."

An indifferent August for Arsenal was followed by an unbeaten September, and while they slipped to defeat at Watford on October 14, that remains the club's only loss in 11 games.

And having overcome a knee problem, Ozil outlined his importance to the side with a goal and assist in the 5-2 victory over Everton on Sunday. 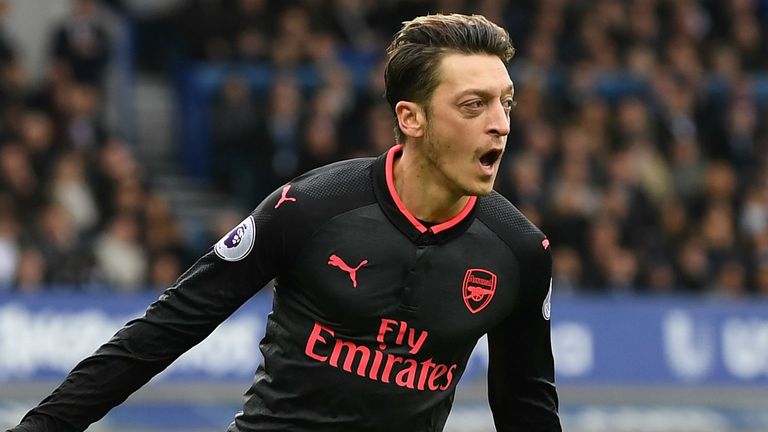 For the German, it is now a matter of staying consistent, and in turn, he hopes that will lead to more success at Arsenal, regardless of what position he plays.

"I know myself better than anyone else and I'm someone who needs to have fun on the pitch," Ozil added.

"Everyone knows my favourite position is the playmaker, the No 10, at the moment the coach plays me on the right and it's a thing I need to accept and to show my quality in that position.

"Of course I'm happy to perform and give good performances individually, but it's more important that we do that as a team. I think we did that really well against Everton.

"We came back very strongly, especially as we were 1-0 down. To come back as strongly as we did is pleasing.

"We have lots of quality in this team as we have shown. It's important to be consistent if we want to be successful.

"We know we have the quality, we just have to give our all and believe in ourselves. If we can do that I'm convinced we can win trophies."