Arsene Wenger insists Mesut Ozil is keen to stay at Arsenal and believes the Germany international is playing the best football of his Gunners career.

Ozil scored with a stunning volley as Arsenal secured all three points in a 1-0 victory over Newcastle at the Emirates on Saturday.

The 29-year-old - whose contract expires in the summer - has recently been linked with Manchester United though Wenger confirmed no official approach had been made.

Like his team-mate Alexis Sanchez, Ozil has yet to agree fresh terms with the club and Wenger remains determined that both will not be sold in January - even though the pair could then walk away for free in the summer.

While Sanchez came close to moving to Manchester City in the last window, the Arsenal boss is confident Ozil is where he wants to be. 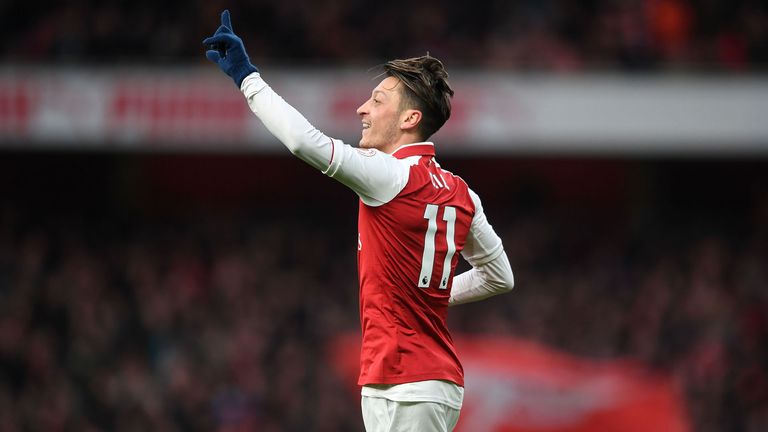 "I believe he wants to stay, he is not to be convinced [to sign a new contract]," said Wenger.

"You want nobody to leave and you see where we stand on that. But at the moment, it's very difficult.

"Until the end of the season we know what it is, but after that, I cannot tell you."

Ozil's match-winning goal against Newcastle on Saturday was a highlight from a player who has divided opinion among the Arsenal fan base since arriving from Real Madrid for £42.4m in 2013.

But Wenger feels Ozil is now playing the best football he has seen from the World Cup winner since he moved to north London four years ago.

"Yes, certainly," he replied when asked if Ozil was currently in his best run of form for Arsenal.

"I think he takes responsibility and that's what you want from him. He is more mature, he guides the team very well, he does a lot on the ball and your heart rate always goes down when he has the ball.

"I would say more important is the quality and the influence he has on the collective game, rather than his goal.