Ramsey and Cech to get Arsenal farewell at Sunday's Brighton game 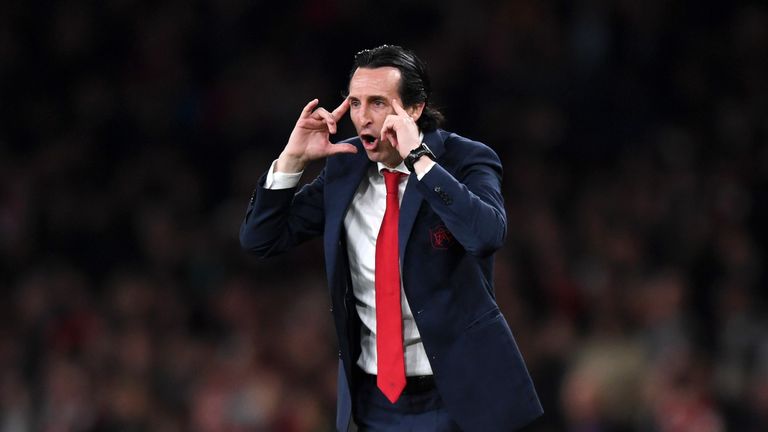 Unai Emery insists Arsenal are not nervous about finishing in the top four, despite losing their last three Premier League matches

Unai Emery insists Arsenal’s main focus remains to secure a top four finish in the Premier League this season, despite taking a huge step towards the Europa League final on Thursday.

The Gunners have a 3-1 advantage over Valencia going into next week's semi-final second-leg, making them strong favourites to reach the final in Baku on May 29.

Before their trip to Spain, Arsenal welcome Brighton to the Emirates on Super Sunday, live on Sky Sports Premier League, as they try to overtake Chelsea in the race for fourth.

"My message is the same for the team and the supporters, our first priority continues to be the Premier League," Emery said.

"The second [priority] is the Europa League. We need to play the second leg in Valencia but it is going to be difficult.

"For us, the Premier League is the first competition where we want to do something important this year."

Emery's side have lost their last three Premier League games, but their poor form has been matched by those around them - Tottenham, Chelsea and Manchester United - meaning all four are still separated by just five points.

"In the Premier League, every match is very difficult," the Arsenal boss added. "Every single team has a lot of good players and a strong mentality to fight against every other team.

"The teams like Tottenham, Chelsea and ourselves are playing a lot of matches in Europe and fighting almost every three days.

"To play every match with a big performance is not easy."

Asked he thought his team were suffering from nerves, Emery said: "I don't know if it is nerves. We have big players with lots of experience and a big mentality.

"I think we are in the position we wanted to be in at the beginning of the season."

Sunday's match at the Emirates will also give Arsenal's home fans the chance to bid farewell to departing duo Aaron Ramsey and Petr Cech.

"He [Ramsey] is an Arsenal supporter, but he is finishing his moment here," Emery added. "Sunday is the last match at home and he is going to be helping us. Although not playing because of his injury, his spirit is good for us.

"Also, Petr Cech is going to finish his career as a player.

"First we will try to win, and after some players can have their moment because they are important in the present and in Arsenal's history."