Arsenal have completed the Deadline Day signing of Kieran Tierney from Celtic but just what are the Gunners getting for their £25m? We asked Tierney’s old team-mate Kris Commons and former Celtic and Arsenal forward Charlie Nicholas for their verdict - and they had contrasting views…

Kris Commons: "It was under Ronnie Deila and John Collins when he first came through. He had been doing really well for the development squad and the reserve team.

"But as far as a left-back went, we felt that Emilio Izaguirre was a stick-on and that his place was very secure because during the years that Emilio had been there, we had been a top team and there had even been speculation about him moving to a top-four Premier League team himself. I thought it was going to be hard for him to get into the team.

"But I always remember John Collins saying that this kid could go far. He has great ability and he soon became a huge fan favourite. Since breaking into the first team and now the national team he has just got better and better.

"When he was a kid, he was just a thin lad. Now he's a top athlete. He has matured into a real man. You only have to look at him on the pitch, he is very imposing now. He's now not just a thin, scraggy little teenager. You can see that with his muscle mass on his thighs and his upper body as well."

Charlie Nicholas: "From a very early age, he was physically like Wayne Rooney when he came into the Everton first team, physically strong, a man. Big powerful thighs, quite dramatic going forward."

Kris Commons: "Whenever I played with Kieran he was always that outlet on the left-hand side who gave the team that natural width because he got forward so well. At times, he was an out-and-out winger for us because we did get our width from the full-backs.

"I think KT's best position would be left-back in a back four but he is very versatile. He has even played right-back on numerous occasions, not just for Celtic but for the national team. He has played in a back three too. He is a top defender and that gives him the luxury of filling in on the left or the right without it being too much of a problem for him." 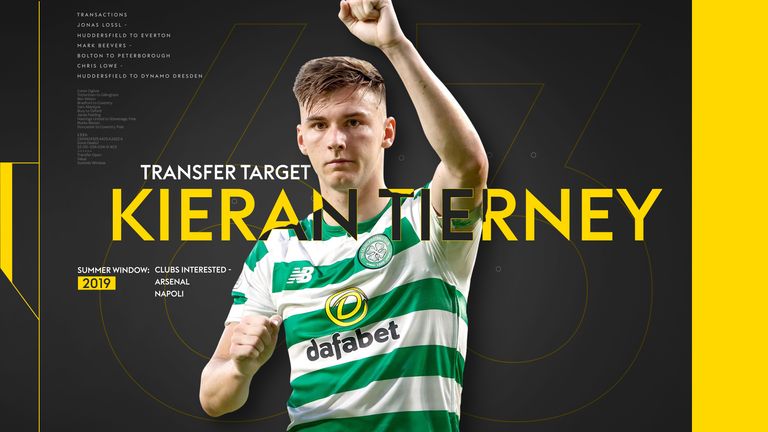 As Kieran Tierney joins Arsenal on Deadline Day, we take a look at some of his best moments for Celtic

"He is never going to be a centre-back - for me, he is either a left-back, or nothing else. That would be his strongest position, although you could push him into a left wing-back and Arsenal did a back five at times under Unai Emery last season."

Kris Commons: "A lot has been said about Kieran's pedigree when he comes up against the top teams in Europe but I have always thought that the defensive side of his game is the strongest part. I think he reads the game well and he has a great engine and he is a top professional."

Charlie Nicholas: "He has improved a lot going forward. His final ball is still not as good as it should be. But my concern is he is coming to a team who are weak defensively and I think that is his weakest side. I'm a great believer that defending is an art and the one aspect of his game that has not improved as much as the other aspects of his game is defending.

"He learned a great deal under Brendan Rodgers, but predominantly Tierney is used to his team having 70 per cent plus of the ball. With Arsenal, in big games, that could be 30 per cent, so you are asking a lot for him to come in and rectify the situation.

"In Scotland a year ago, everyone was saying that Tierney was a much better left-back than Andy Robertson. And I said at the time he is not, Robertson is far more consistent, more dynamic and his final ball is far more reliable. And that is where Tierney has to catch up."

Kris Commons: "I have no doubt that he will come into the team and make a huge impact. It's his enthusiasm and his professionalism. He can get across the pitch at pace and in the final third he has good delivery. I think he will bring a lot. Arsenal have had a weakness defensively for a long time. I know what KT can bring and he can go straight into that team."

Charlie Nicholas: "A £20m valuation is probably a bit high, so if Arsenal are paying £25m, they are paying over the top. But the reality is that at the moment Sead Kolasinac and Nacho Monreal are not as good as Tierney. He is a good asset for Arsenal and I am happy they are buying him, but he is not the asset. They still desperately need a centre-back."