Arsene Wenger believes Serge Gnabry chose to leave Arsenal after being "manipulated behind the scenes" by Bayern Munich.

Gnabry broke into the Arsenal first team under Wenger in 2012 but went on to make only 10 Premier League appearances for the Gunners before leaving to join Werder Bremen in 2016.

The winger moved on to Bayern Munich the following season and has since become a key player for the Bundesliga champions, as well as the German national side.

Former Gunners manager Wenger insists he wanted Gnabry to remain with Arsenal, but the 24-year-old was tempted to leave the Premier League amid interest from Bayern.

"We tried to extend his contract for a very long time and I think that Bayern manipulated behind the scenes, that if he went to Bremen he would join Bayern after," Wenger told beIN SPORTS.

"He was always a very talented boy who lacked confidence in some stages, but we always thought we had a player who could achieve a lot.

"He came back from a very bad experience [on loan] at West Brom where his confidence was destroyed. I tried to rebuild him because I believed in him." 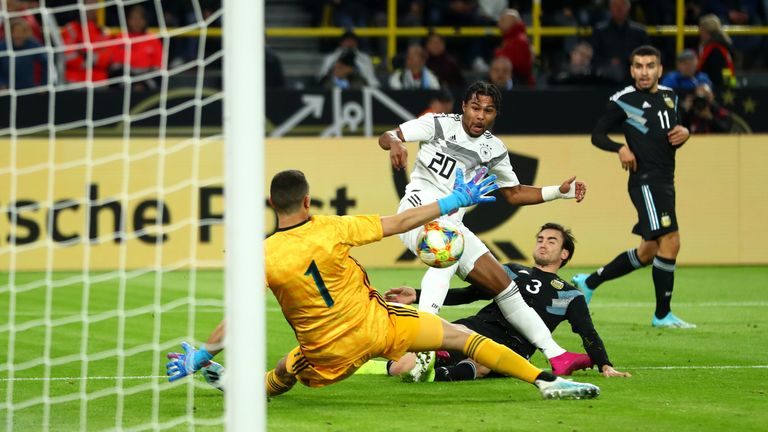 Gnabry has scored five goals in nine games for Bayern this season, including four in a 7-2 win over Tottenham in the Champions League earlier this month.

Wenger admits he was surprised to see the German champions dominate against Arsenal's north London rivals.

"They'd just won 3-0 at Paderborn, you wouldn't expect them to come and put seven goals away at Tottenham," he said.

"I think it was one of those nights where everything goes for you and everything against Tottenham."

Gnabry also scored one and set up another for Germany in their 2-2 draw with Argentina on Wednesday.

However, Wenger believes the 24-year-old needs to improve his consistency if he is to be considered one of the world's best players.

"A top-level career is consistency, if you look at the players that dominate our sport it's the ones that show huge consistency and that's what is at stake," he said.