Freddie Ljungberg: Andries Jonker on why Arsenal should go all in on interim head coach

Ljungberg's long-standing colleague, Andries Jonker, discusses his biggest quality as a coach and why English football as a whole would benefit from his full-time appointment.

Arsenal should show "guts" and give "talented" Freddie Ljungberg the permanent job - that is according to someone who knows club's inner workings and the Swede better than most.

Arsenal fans were left with more questions than answers on Ljungberg's managerial style after his first game in charge against Norwich.

The man well-placed to shed some unique insight on his coaching tendencies is current Telstar manager Andries Jonker.

The Dutchman, who has previously held coaching positions at Barcelona and Bayern Munich, worked alongside the Ljungberg at both Arsenal and Wolfsburg.

In fact, Ljungberg quit his coaching role with the Gunners in 2017 to join Jonker's coaching staff in Germany having initially cut his teeth under his tutelage in the Arsenal youth set up.

Sky Sports News sat down with Jonker to discuss all things Arsenal and Ljungberg ahead of the interim boss' first home game in charge against Brighton on Thursday night.

'He is one of Arsenal'

"I would support the guts in making the choice (to hire) Freddie Ljungberg. Arsene had been there many, many years and he did it his way. Then came another coach (with a different way) who had a very difficult time.

"I would prefer for them to give the chance to someone who knows Arsenal, knows the academy, knows all those talented players. He also knows the laws of total football.

"Give him time, give him confidence, help him and support him. He is one of Arsenal. I would appreciate the guts of the Arsenal bosses if they hired Ljungberg."

"I would appreciate the guts of the Arsenal bosses if they hired Ljungberg."

His ambition and desire to 'invest in his career'

"What I loved about Freddie is that he started to ask how can I help at Hale End (Arsenal's youth training facility), how can I help the youngsters from the U9s to the U16s. He wanted to find out whether he liked this job.

"Then he became assistant coach of the U16s for half a year and after when he felt comfortable he asked me 'can you give me a team? I would like to be a professional coach, the head coach of the youth team for myself'.

"I said this is the academy, we can't pay you first-team wages, I can only pay you what the other coaches have as well - he did not mind. He said 'I want to invest in my career, so far I enjoy it very much and I want to improve myself'. He's proven to be a very talented coach."

What is Ljungberg's biggest quality as a coach?

"The reason I brought him to Wolfsburg (was that) I wanted to have someone with an eye for individual development of players.

"(He has) this strategical mind. He wants to think about tactics, how we beat the opponent. 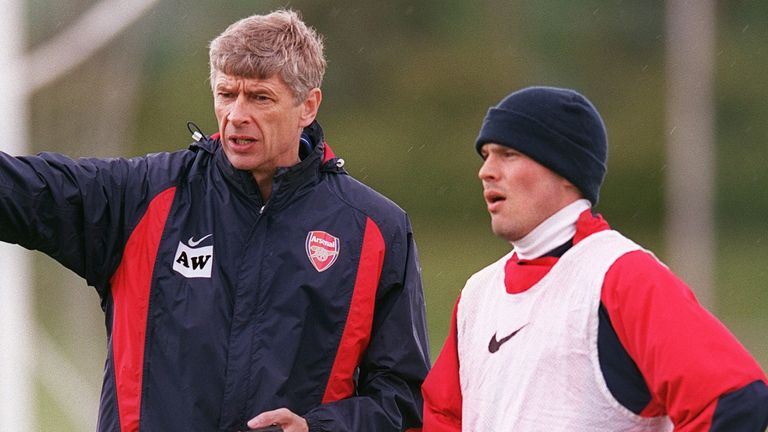 "Freddie is a lover of really good football, the way Arsenal want to play normally fits him. He wants his teams to try to play offensive football and be exciting - winning with that. This is the style he likes.

"He will always try to find the combination of having good organisation in his team. Freddie has a good eye for the tactical details for the team and he knows that you cannot only play beautiful players.

"If you want to win you need to find the mix of people who can defend and do the dirty work and then the players who can make the difference and decide matches to your advantage."

Freddie is not a 'yes man'

"Freddie is a team player, he will involve his team in his decisions but he has also been a top player for years, so it is quite obvious that he knows how it works.

A new dawn for Arsenal's academy and English football

Jonker had previously suggested young players in English football were not receiving the chances they deserve in Premier League first-teams - including Arsenal's.

But the Dutchman says he is certain that Ljungberg's appointment would see a dynamic shift which would benefit English football as a whole.

"I am completely convinced that if Freddie has the chance to bring in a young player he won't hesitate, he won't be afraid and he has confidence.

"He has spent so much time and effort in developing individual young players. He did it at Arsenal, he did it at Wolfsburg, I am completely convinced that would be a really good development at Arsenal specifically, but more so for English football in general.

"I do hope he will get a chance to show there is another way as well - the way of having confidence in the talents that you have brought up yourself.

"These players were developed in a really good way. Compared to other European top squads, Arsenal have done a good job with the academy in the past few years."