Arsenal boss Mikel Arteta says Tuesday's game at Chelsea is a must-win as they battle to keep their top-four hopes alive.

The Gunners sit 10th in the Premier League table, 10 points behind Chelsea, and have won once in their last seven league games.

Chelsea inflicted a first home defeat on Arteta when they came from behind to win 2-1 at the Emirates Stadium on December 29, and the Spaniard knows a repeat will be a detrimental blow to their Champions League qualification hopes.

"It's very important if we want to fight for the top four," said Arteta.

"The game at home was the same, it could have made a big difference and we were very close to it.

Arsenal led for the majority of last month's match with Chelsea, only to concede twice in the final seven minutes, but Arteta took positives from their overall performance.

"I loved the first 30-35 minutes and how aggressive we were, how much we wanted to attack them and put them under pressure," he said.

"It's the way we want to play. After that, we had a little bit of a setback. They changed their system and we found it a little more difficult to deal with that.

"We started to defend deep without really conceding anything, and had some great opportunities on the break as well.

"Physically as well in that moment, it was harder for us to maintain the same amount of energy. Against Chelsea, that is vital." 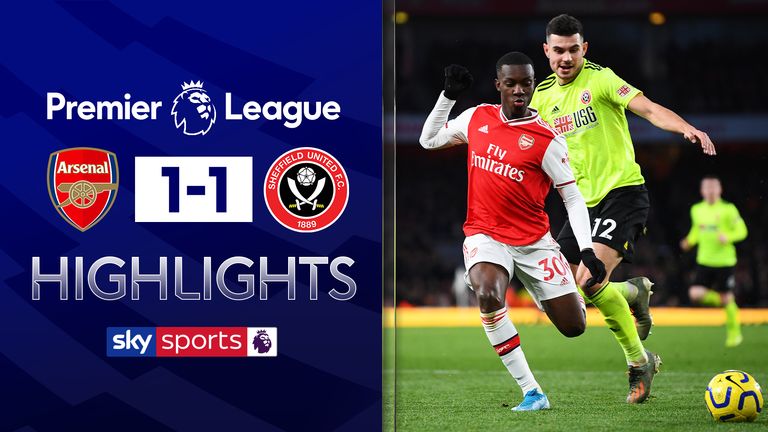 FREE TO WATCH: Highlights as Arsenal and Sheffield United draw in the Premier League

He added: "A lot of things have happened since then. It seems longer than a month, the amount of games we've played. A lot of positives in terms of reaction, which I've taken on board.

"We have managed to change the energy and atmosphere, and the relationship and chemistry with our fans which was massively important.

"We've been very unlucky with results, it could have been a bit different. There are other aspects which have influenced that."

Arteta had little to report on the transfer front and says it is possible Arsenal will not sign anyone during the transfer window.

Eddie Nketiah came off the bench during Saturday's home draw with Sheffield United, the 20-year-old's first appearance since returning from a loan spell with Leeds.

When asked how big a role he sees Nketiah having, Arteta replied: "It would depend on the circumstances - the players we have available, his performances, the way he trains and impact he makes every time he plays.

"He is a young player but I have to treat him exactly the same as the others. I put him on the pitch because he deserves it, the way he is showing every day how much he wants it.

"It will depend on him."