Jose Mourinho is under consideration to be the next Everton manager; no official approach but Mourinho committed to Roma; Frank Lampard and Wayne Rooney remain in contention; Duncan Ferguson appointed caretaker manager 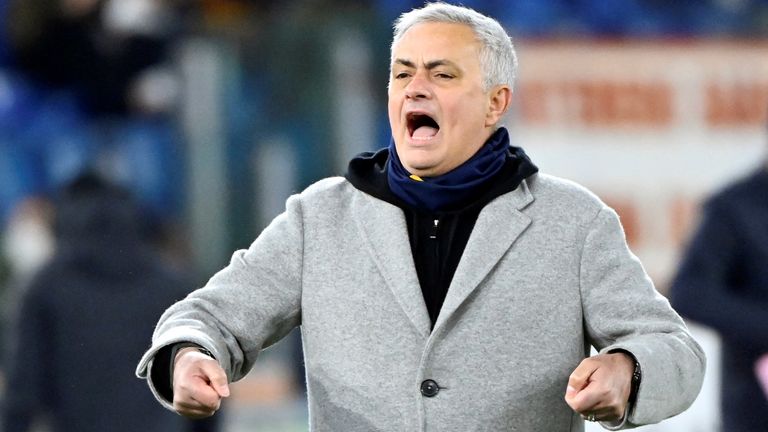 The Transfer Show's Kaveh Solhekol reports that Jose Mourinho will not be leaving Roma, despite reports of interest from Everton

Jose Mourinho is happy at Roma despite interest from Everton, who consider him a candidate to take over from Rafa Benitez.

An official approach has yet to be made to Roma by Everton but owner Farhad Moshiri is contemplating the prospect of bringing the former Chelsea, Manchester United and Tottenham boss to Goodison Park.

However, Sky Sports News understands that Mourinho wants to stay in the Italian capital and remains committed to Roma, where he is only six months into a three-year contract.

Roma see Mourinho as crucial to their future progress and will not let him leave the club.

Another new name being considered by Everton is former Porto and Fenerbahce manager Vitor Pereira, who was in the running for the job before Carlo Ancelotti was appointed.

Frank Lampard and Wayne Rooney remain strong possibilities for the position as the wide-ranging search for Rafa Benitez's replacement continues.

Lampard, who has not been in a job since being sacked by Chelsea last January, is expected to be interviewed for the job.

While Derby boss Rooney is understood to be happy and focused at Pride Park, but would find it difficult to turn Everton down considering his history and association with the club.

Other names on the shortlist include Belgium head coach Roberto Martinez and Nuno Espirito Santo, who was sacked by Tottenham earlier this season.

Former Everton boss Martinez is high on the shortlist and would be keen to return to Goodison Park, but a deal is made difficult by the Belgium FA who do not want to let the Spaniard leave before the 2022 World Cup.

Duncan Ferguson was appointed caretaker manager on Tuesday following a training ground visit by chairman Bill Kenwright. As the former striker took training for the first time, Kenwright addressed the players and staff ahead of a crucial game on Saturday at home to Aston Villa.

"There are problems that are well beyond the manager. This is a football club that has been making, at executive level, what appear to be wrong decisions for a number of years.

"They're looking for a sixth permanent manager since Roberto Martinez left so clearly the strategy in recruiting managers is not correct in whatever way, shape or form because they're not getting the right man for the right club.

"The fans - and you can understand why - are tearing their hair out because it's been an endless cycle and there doesn't seem to be any clear light at the end of the tunnel. I think Rafa Benitez had to start well and he had to overachieve. Given that history with Liverpool, he was very unpopular with a lot of the fanbase.

"If you have that position you know that, with the first big crisis, you're going to be out the door. You can't really survive it."

"Lampard is an interesting one. I can understand why his name is mentioned because every time a Premier League job comes up, his name will be mentioned. At Chelsea, he did a fair job. It was a challenge for him because when he was appointed he had the transfer embargo over the club, so he wasn't able to necessarily mould it in his image.

"He did well at Derby, he did pretty well at Chelsea. Which club fits him, and the other way around? It's a tricky one for Lampard. I don't know if this is the right time for him but I can see why he would be interested because Everton is a really huge name in English football. They're regarded as one of the sleeping giants.

"If you can go in and do well, there is a project there... and then you're at a great football club, if you get the opportunity to be successful. But it's such a tough job. It has to be the right fit."