Tottenham are unable to open their new stadium until at least April after Crystal Palace progressed to the FA Cup quarter-finals.

After the north London derby against Arsenal was ruled out, the Premier League match against Palace on March 17 was Spurs' next target for their first game inside the new 62,062-seater ground.

But the club announced the fixture will have to be rearranged after Palace beat Doncaster to make the last eight - which will be played over the weekend of March 16 and 17 - meaning the first available dates are during the first week of April.

This is because a two-week international break follows Spurs' original date with Palace before they then travel to Liverpool on March 31, which means the next home clash available is against Brighton on April 6.

Following Crystal Palace’s FA Cup fifth round win today, our Premier League clash at home against Palace scheduled for Sunday 17 March will have to be rearranged.

But that is also an FA Cup weekend - when the two semi-finals are held at Wembley - and the south-coast club are also still in the competition.

The next option for the stadium's opener is a potential Champions League quarter-final, with Spurs 3-0 up from the first leg of their last-16 tie with Borussia Dortmund, the first legs of which are held on April 9 and 10.

The club must also hold two successful safety test events with people inside in the meantime, which have not yet been scheduled, before they can obtain a safety certificate and finally move in. 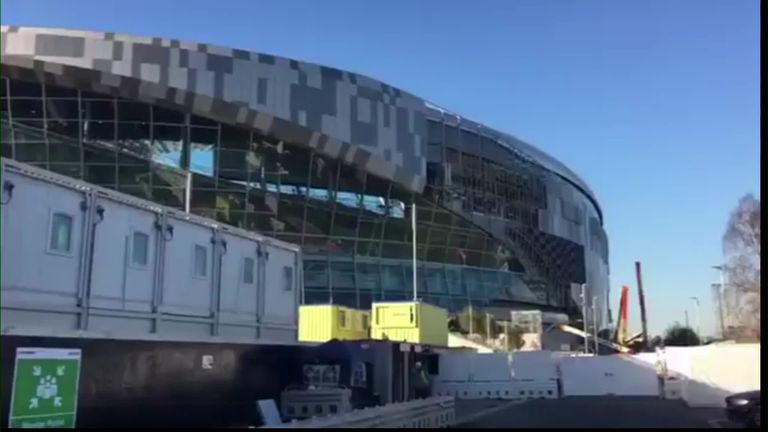 Tottenham Hotspur were testing safety systems on Friday, when the stadium PA’s evacuation message could be heard from outside. Footage courtesy of @Westpole71 (Twitter)

Spurs appeared to be testing safety systems on Friday, when the stadium PA's evacuation message could be heard from outside and was documented by one supporter on social media.

Last week, Spurs boss Mauricio Pochettino insisted his preference was to move into the stadium as soon as possible, even if it meant playing there for just one game before the end of the campaign.