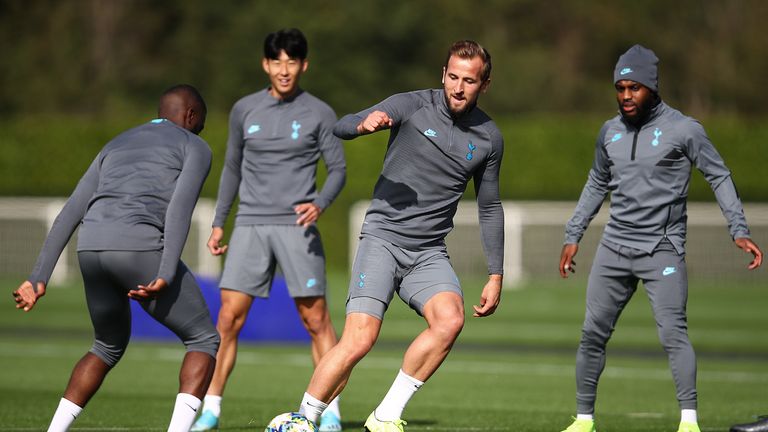 Bayern Munich head coach says Tottenham striker Harry Kane is among the best in the world along with Robert Lewandowski.

Tottenham's Harry Kane and Bayern Munich's Robert Lewandowski are two of the four best strikers in world football, according to Niko Kovac.

The two forwards go head to head at the Tottenham Hotspur Stadium on Tuesday night when Spurs host Bayern in their Champions League Group B clash.

Speaking ahead of the game, the Bundesliga side's manager was full of praise for the England striker but also suggested he may have some undisclosed methods to help his defenders stop him.

"I can say something about Harry Kane but there is no need to do so," he said.

"People sitting in front of me have already said everything there is to say about him, every word is already too much.

"His quality in the Premier League but also in the England squad speaks for itself, he's sensational.

"He's a player that can do it all. He is great at keeping the ball, he's good with his head, there is nothing he cannot do.

"He's a very strong striker. Him and Lewandowski are probably in the top three, four in the world. That's the way it is at the moment.

"Both of them are hugely successful and I look forward to seeing out things pan out tomorrow.

"I am going to give my team some information about Harry Kane which I am not going to tell you."

Gnabry not bothered by potential boos Bayern Munich midfielder Serge Gnabry says he has no extra motivation to defeat Tottenham in the Champions League as a former Arsenal player.

Former Arsenal winger Serge Gnabry returns to north London on Tuesday night as one of the mainstays in Kovac's Bayern side.

The German understands he may get a hostile reception from the Spurs crowd having represented their bitter local rivals but insists he will not let it affect his performance.

"I think I am motivated in every game that I play. I just want to win. Of course I know the history with me having played for Arsenal," he said.

"It's in my mind but it's important for us to win tomorrow so either way I am going to give 100 per cent.

"To be honest I am not really bothered (about potential hostility from Tottenham supporters). Tomorrow is a new game, I am here with Bayern Munich now. Depending on the pitch and how it is going, I am going to give my best either way regardless of the reaction of the crowd."