As Tottenham prepare to face Everton on Sunday, Mauricio Pochettino tells Sky Sports how he is trying to find a new formula to take Spurs forward and why he is not banking on Tanguy Ndombele, Giovani Lo Celso and Ryan Sessegnon to provide immediate solutions.

Mauricio Pochettino has experienced a lot during his coaching career. He has fought against relegation and even paid for his own equipment at cash-strapped Espanyol. He has led Tottenham to a Champions League final and into a spectacular new stadium. But rarely has a situation required quite as much care and attention as the one he's in now.

Five months on from that Champions League final, and after four consecutive top-four finishes, his Spurs side languish in mid-table with 12 points from 10 games. The last time they visited Goodison Park, they hit six goals past Everton to make it 11 wins from their last 13. On Sunday, they return looking for a first Premier League away win since January.

It has been a testing period for everyone at the club - not least the man at the centre of it all - but in the foyer of their pristine Hotspur Way training ground, sheltered from the drizzle and peering out over the carpet-like pitches which surround the main building, Pochettino contemplates his side's plight with his usual calm.

"Of course, we know we are responsible for turning this situation around and changing the dynamic to one of winning games again, but we are not worried," he tells Sky Sports. "We are staying calm and working in the knowledge that, in football, these types of situations can happen.

"What's happened is that in recent years we have always been a team which has won more than it lost, which is always high in the table, fighting with the top clubs despite having a different way of working. And, above all, reaching the Champions League final changed the profile of the club. People want us to be at that level again and we understand that."

Pochettino has set these high expectations for himself. He has transformed the club since his arrival in 2014. But recently, the circumstances have not been easy. The Champions League final was followed by an awkward summer which left him with what he described as an "unsettled" squad. He traces the recent issues back to that period.

"With a team that plays in the Champions League, a team in which 90 per cent of the players play for their national sides, it's important to remember how important pre-seasons are," he says. "It's important that the players arrive in pre-season, so that we can work and create a positive dynamic.

"It's something that this year, because of the circumstances, and the individual situations of some players regarding transfers and everything else, we didn't have. We didn't have the stability and we started working late on trying to find that dynamic, which has affected how the players have performed on the pitch."

For a keen man-manager who prizes togetherness above all else and believes in what he calls energía universal, the idea that everything is connected, it was far from ideal. And while have been signs of progress lately - the outcome of Sunday's clash with Liverpool might have been different had Heung-Min Son's second-half effort hit the net instead of the crossbar - he admits that he is still searching for a new formula.

It can be seen in the way he has chopped and changed this season. According to Opta, Pochettino has used six different formations in 10 Premier League games so far - behind only bottom side Watford. Only two sides have used more players. Only three have made more line-up changes.

"The most important thing is to try different things," he explains, speaking freely in his native Spanish, "to look for the right connection and the chemistry we need to help us find our strength and solidity again.

"It's a constant search. When things are going well, it's a search to maintain it, which is difficult as well, but when things are not going well and results are not good, it's a question of finding the formula that gives balance to the team and allows you to get the results you want.

The search of a new formula is impacted by the profile of the squad as well as its personnel. Spurs were the youngest side in the Premier League in Pochettino's first three seasons in charge, their youthful intensity evident in the way they hounded opponents off the ball. But key players have got older and the average age of their starting line-up has shot up.

It is not conducive to the kind of high-octane football this Spurs side first became known for, but there are no complaints from Pochettino. He knows the onus is on him to find a new way to make it work.

"You have to try to get the best out of every squad," he says. "I believe that our responsibility is to adapt to what we have. It's true we are still searching for the best way of performing well and getting better results, but we hope this period will be as short as possible and that the team will soon start performing as we believe it can."

The team should take on a younger feel once Tanguy Ndombele, Giovani Lo Celso and Ryan Sessegnon - a trio with an average age of 21 who arrived at a combined cost of £120m during the summer - are fully integrated. But while fans are clamouring to see more of them, Pochettino insists they should not be expected to provide immediate solutions.

"It's important not to put too much responsibility on the new signings," he says. "They have come to give the team certain qualities, but of course we also understand that they are young players who have to adapt, and who, in Lo Celso and Ndombele's cases, have come from abroad, from different leagues. The priority is adaption more than performance.

"There's a lot of pressure for them but there are a lot of examples of young players, like Son and like many others, who have needed a season or a season-and-a-half in order to perform at the level that we want. These three players are not going to be the exceptions. They are not that."

It's important not to put too much responsibility on the new signings. The priority is adaption more than performance.

Patience, though, is a rare commodity in modern football, as illustrated by the fact that, into his sixth season at Tottenham, and following Jim Bentley's departure from Morecambe this week, Pochettino is now the fourth-longest serving manager in England's top-four divisions.

Does it make him feel old? "In football-terms, it's a very long time, a lifetime," he says with a smile. "It's a lot more difficult for managers now. You can work very well, but if you don't get results, it's difficult to survive."

That pressure for results is on Pochettino now, but he has come through tough times before at Spurs and it is nothing in comparison to the early years of his coaching career at Espanyol, when he inherited a team which appeared doomed to relegation and a club in financial disarray. 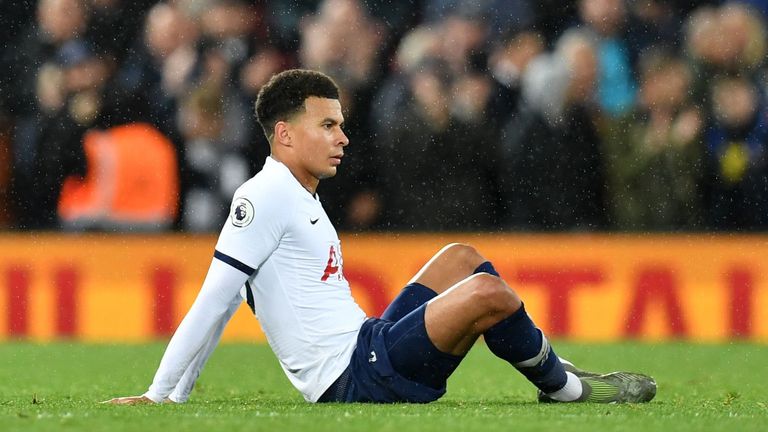 Pochettino has backed Dele Alli to return to form

"It was difficult, but it helped me, when I was young, when I was beginning my career, to develop my qualities, to improve and to learn how to cope with adversity. I think it was an important part of my personal development as much as my professional development."

Pochettino has come a long way since then and so too has the job of management itself.

"It is more difficult to distract yourself these days," he says. "In 11 years, football has developed so much. The working conditions are much more favourable, with so much more technology, so many more analysis tools and everything else. It helps you, but it also demands more work and more time. For 24 hours a day, you cannot stop thinking about football."

It is with that intensity and dedication that he is approaching the challenge of finding a new way forward for Spurs. He speaks proudly of the work he has already done here and remembers the "enormous happiness" of his first game in charge, a last-minute win at West Ham in 2014, but the present situation is his sole focus right now. What he would do for another win like his last one at Goodison Park on Sunday.