Spurs finish second in Group B behind Bayern Munich 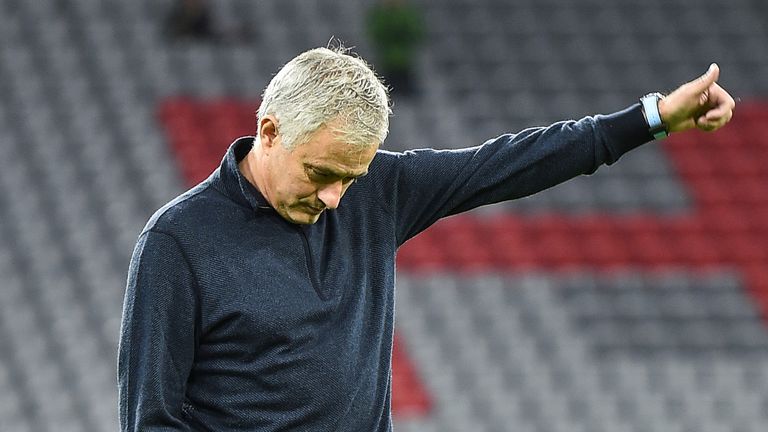 Jose Mourinho insists Champions League opponents will want to avoid Tottenham in the last-16 draw on Monday, despite his side's 3-1 group-stage defeat at Bayern Munich.

Spurs' second-place position in Group B was already assured ahead of Wednesday night's clash and Mourinho rested a number of key players for the trip to Germany, including Harry Kane, Dele Alli and Jan Vertonghen.

As a result, Mourinho was keen to underline he would not read too much into the loss to Bayern Munich but instead use the players' performances to influence future team selections - and warned Spurs would be a far stronger proposition come the knockout phase in February.

Who can Tottenham draw in last 16?

"I think the teams that finished first they wish they don't play against us," Mourinho said.

"I think we're one of the strongest teams from the second group.

"I know that we are a country that goes through a crazy period, which many, many times leaves marks on players, teams, on conditions, but by the end of February I understand my players better, they understand me better. We have two more months of work together and I think we're going to be much more ready.

"But today wasn't a question of being or not being ready. Today was the very difficult situation of playing a game and prepare [for] a game where you put more emphasis on the players that rest than on the players that play and the result you are fighting for.

"That's very difficult and I try to hide from the players that feeling but the players are intelligent guys and they understand clearly my focus was not on today my focus is on what's next."

Mourinho believes that despite Bayern's clear dominance in the contest, Spurs still had moments where they were in position to push for a result.

However, following the 7-2 defeat to the same opposition earlier this season under his predecessor Mauricio Pochettino, Mourinho is also keen to have another showdown with Bayern later in the competition.

"This team is not what I call a team," he said. "What I call a team is when you work together, you develop principles together. This team we played tonight is a team that is not a perfect puzzle. We just tried to organise a team where we could rest some players and at the same time to give conditions for the more inexperienced people to perform, to have some security.

"I think in the first half, of course, they had chances to score more goals but we were one minute away from going to half time at 1-1. When I play [sub] Heung-min Son, I was going to play Son with the [score] 2-1. We concede one just in a moment where Sonny was coming.

"My wish is we can be back, and if we can be back it has to be for quarter-final or semi-final because we cannot play them in the next round.

"So my wish is to be back for a proper match, a match that we all like."

The writing was on the wall before a ball had even been kicked, with doubts over the level of performance Spurs could produce without influential duo Harry Kane and Dele Alli. But while some players looked off the pace and disinterested with qualification already secured, one stepped up - Ryan Sessegnon.

It seems like Tottenham fans have been waiting a lifetime to see one of their marquee summer signings in action in this season, but with his crippling hamstring injury behind him, the 19-year-old was handed his first Tottenham and Champions League start. He rose quite superbly to the occasion.

Sessegnon was Spurs' only outlet on a difficult night but utilised his pace, power and precision to become the club's youngest-ever goalscorer in the Champions League with a thunderous first-half equaliser.