Jose Mourinho exclusive: Tottenham head coach back in the inferno he adores

In an exclusive interview with Sky Sports, Jose Mourinho opens up on his return to football, what he learned during his break and how he is determined to get to know his own squad at Tottenham before scouring the transfer market.

"It's what I am now, and how I feel now. Happy to come every day, happy to be here since 7.30am until 6.30pm. Happy to sleep here after matches, be here with my staff analysing matches and preparing for the next one.

"Happy to be on the pitch and coach the players. Happy to work in the office and analyse everything. Happy to go to every match. That's the happiness of the day-by-day which helps you give the best. That's the way I feel now. I'm happy."

In case it wasn't obvious, Jose Mourinho is happy. He says the word 18 times in the space of three questions.

He means it, too. This is Mourinho's natural habitat, after a 337-day break that wasn't really a break. 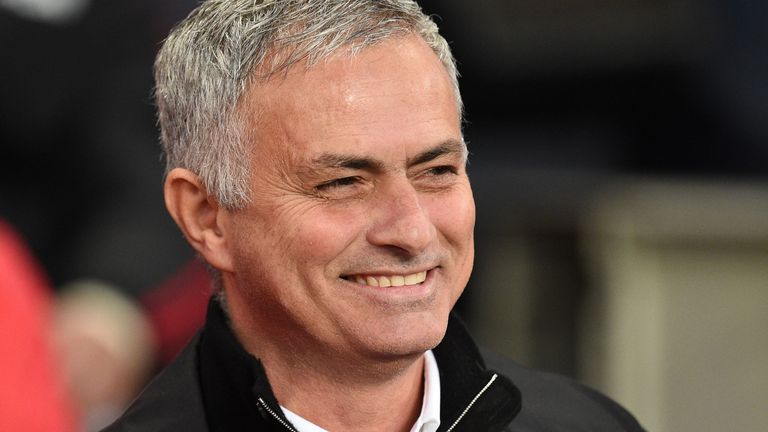 In the summer, Mourinho opened up on his identity, adapting as a coach, embracing change and constantly studying in an exclusive interview with Sky Sports News

In 2001, the term 'Leisure Sickness' was coined by Dutch psychologists Ad Vingerhoets and Maaike van Huijgevoort. It's a feeling of dissatisfaction, and in some cases illness, derived from "the inability to transition from the work to the non-work environment, a high need for achievement and a high sense of responsibility".

Speaking to Sky Sports in the summer, Mourinho admitted a similar dissatisfaction existed in him. There was a "fire" inside, and five weeks in at Tottenham, he is back in the inferno he adores.

My friends tell me 'enjoy your time, enjoy your July, enjoy your August, enjoy what you never had'. Honestly, I can't enjoy. I am not happy enough to enjoy. I miss my football, I have the fire.

Mourinho is the antithesis of the Sunday feeling. He lives, breathes and sleeps management. He wears the pyjamas of management. That state of being fully engrossed in a job, or 101 per cent in as Mourinho puts it, is the only way he knows.

But is he happy with results? Not all of them, you would assume. There have been sore defeats against two of his former clubs Manchester United and Chelsea, preventing Spurs from moving into the top four before Christmas.

But even coming close to that feat seemed impossible five weeks ago. His start has been good, and although he would have wanted it perfect, Mourinho is under no illusions. He has repeatedly said he needs no new players, but that does not mean he inherited an ideal situation as Spurs. Here, he calls a spade a spade.

"When the teams are perfect, when a team is playing amazingly well and the results are fantastic, you don't change managers. I was not expecting to get a team in mid-season and to find a perfect situation. Nobody expects that.

"[It's] an amazing club, amazing facilities, amazing conditions to work. [It's an] incredible project that the club has for the future development of the club. It's exactly what Mr Levy explained to me. Exactly what I was expecting."

Whether Daniel Levy's explanation involved the promise of funds or not is an intriguing question. But it may be irrelevant. Mourinho's net spend was just shy of £300m in two-and-a-half years at Manchester United before his sacking in December 2018. In that time, Spurs' net outlay was around £40m, including two full transfer windows with no arrivals. Admittedly, United won trophies in Mourinho's first season, but it is clear which of the two clubs were on the up during that period.

The next nine months will be fascinating. Through two transfer windows, will Mourinho flood the club with new faces? He feels the current squad is not far off being ripe. Toby Alderweireld ended what seemed like years of incessant speculation by signing a new deal, and Mourinho wants Jan Vertonghen and Christian Eriksen to do the same.

Mourinho is likely to make some signings, of course, but that may be to ensure the natural growth of the squad. More in line with inflation, if you like. That would be a change of tack, but possibly a shrewd one. After all, his signings were used as a stick to beat him with at Old Trafford.

At Spurs, the aim is to bring confidence back into a side who finished inside the top four for four straight years, and man-management is the key.

Asked if it is an understated area of the game, Mourinho said: "Yes. I need to understand the players, the persons. Not even the players, but the persons they are. I need time to understand that, you don't know a person by a look, you don't know a person by one week of work, and I work with so many different people that I just want, in this moment, to learn everything I can about them.

"If you speak with me in two years' time, I will probably know them deeply. In this moment, everything is very superficial, and a very important part of the work is to try to know them the best I can."

What else has he learned during his break? For one, his time working for Sky Sports has given him a fresh outlook on the media.

"But I understand better the pundit's job, I understand it better, much, much better. So by being what I am, which is a football coach, it's much easier for me, that relationship with the media, because I was also one of them."

His time at Sky Sports came after a summer of reflection tinged with a desire to get back into the game. The time off also allowed him to study more.

In the summer, Mourinho opened up on his identity, adapting as a coach, embracing change and constantly studying in an exclusive interview with Sky Sports News

In an interview with Sky Sports in July, Mourinho referenced his love of reading and philosophy, in particular Charles Darwin and the need to adapt to change.

It's very important to study. I like to read people from different periods, different generations and recently a friend of mine told me 'think about Charles Darwin'. He wrote: 'It is not the strongest of the species that survives, nor the most intelligent that survives. It is the one that is most adaptable to change'.

Has his reading adapted since arriving at Spurs?

"The last thing was the report from the analysts about Brighton. That was the last book I read."

That won't win a Booker prize, but Mourinho is turning a new page at Tottenham.