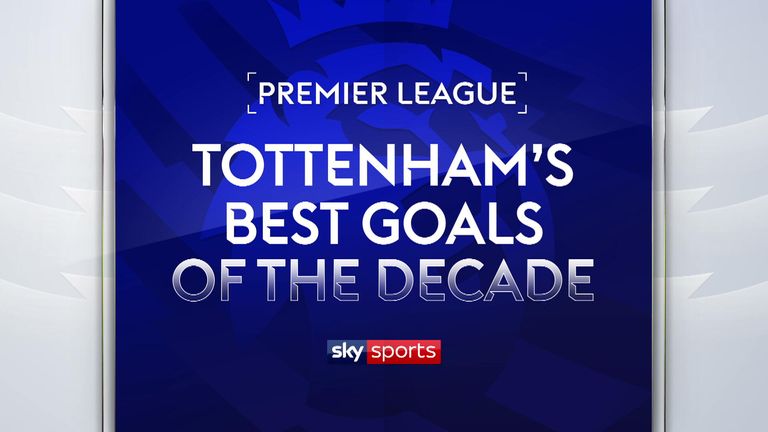 We take a look back at some of Tottenham's best strikes from this decade, featuring a derby day strike by Harry Kane, some magic from Dele Alli and two wonder strikes from Gareth Bale.

Former Tottenham goalkeeper Paul Robinson - who made 175 appearances for the north London club between 2004 and 2008 - has selected his Spurs team of the decade.

With the one-time England international opting for this lineup in a 3-4-1-2 formation, Robinson had a wealth of talent to choose from after an entertaining period under the likes of Harry Redknapp and Mauricio Pochettino.

Hugo Lloris has been the best goalkeeper Spurs have had for some while, he is a World Cup winner who leads by example on and off the field. And even when he has had dips in form, he has come back. He has picked up an injury this season, but I have no doubt he will come back stronger.

I played with Ledley King and he is quality, while Jan Vertonghen and Kyle Walker provide great balance to the right and left of him.

Eriksen has been the dictator for a lot of what Spurs have done over the last five seasons, he is way off that type of form this year, but that is only because of the high bar he has set himself.

Gareth Bale obviously speaks for himself the way he has played over the years. But when he first came to Spurs, we did not win a game. Every time he played, we seemed to lose.

He came from Southampton and played at left-back, but it was Martin Jol who then played him further up the pitch and he seemed to thrive higher up the field.

There was always a top-quality player there, but I think he showed huge improvement as a player in the short time he was at Spurs.

Jermain Defoe is very much loved by the Tottenham fans and he will guarantee goals and you should see how he trains and works at his game on a daily basis…. He scores bundles of goals and he is still doing it at Rangers now!

Harry Kane speaks for himself really, his selection does not need any explanation, but I think him and Defoe would be one brilliant attacking partnership in the day.

Who makes your Tottenham team of the decade?

You've heard from the expert - now you can pick your Tottenham team of the decade! Choose from a selection of the best players below and put them into your own formation.