Did Jose Mourinho's analysis of Manchester United's draw with Liverpool in October reveal how he might set his Tottenham team up against the Premier League leaders on Saturday?

The Tottenham head coach was a Sky Sports pundit when Liverpool last dropped points in the Premier League and his detailed verdict on how United held Jurgen Klopp's side at Old Trafford makes for interesting reading ahead of his own showdown with the title favourites this weekend.

After the 1-1 draw - in which United recorded just 32.1 per cent possession - Klopp was critical of the tactics of United boss Ole Gunnar Solskjaer, saying "they just defended" and "it's not the usual way you think United play against Liverpool".

But United's approach saw them end Liverpool's 17-game winning run at the time and, with the Reds having won every game since in the Premier League, Mourinho may well look to replicate Solskjaer's tactics this weekend with Spurs.

"I think he didn't like the menu," Mourinho said after hearing Klopp's post-match comments. "He likes meat and he got fish. He was not happy. 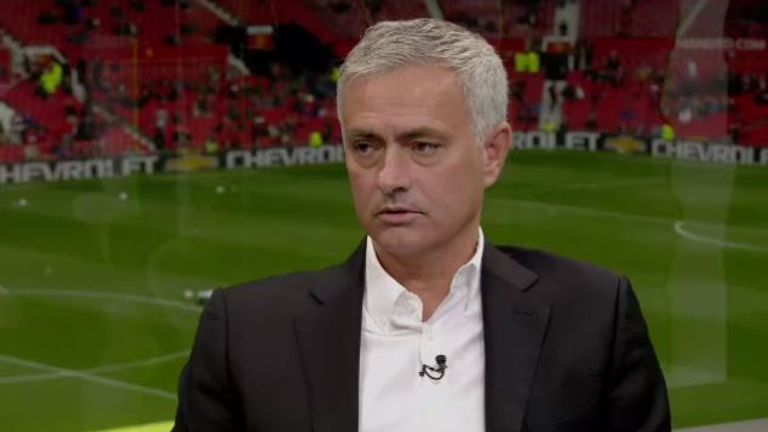 They are of course much stronger playing against an opposition that gives them chances of transitions and counter-attack and United, with the limitations they have at the moment, they play a different profile of game.

Jose Mourinho on why Liverpool struggled against Man Utd

"They are of course much stronger playing against an opposition that gives them chances of transitions and counter-attack and United, with the limitations they have at the moment, they play a different profile of game.

"They try to be solid at the back, they try not to give them a chance of transition, they keep always the three centre-backs in position plus [defensive midfielders, Scott] McTominay and Fred, who were always compact, and they didn't like the menu.

"For me, [Liverpool lacked] quality as a team to play against a low block which is a problem that sometimes they have. They have this fantastic record of so many victories - but apart from that, they have some limitations against teams that play with low blocks.

"They have fantastic results but sometimes they win just in the limits. They can smash opponents that play the way they want to play against."

So will Tottenham be dropping deep and putting every man behind the ball against Liverpool? As Mourinho pointed out, a low block would be a good way of nullifying Liverpool's pace and threat on the counter-attack or after turnovers. But he may be reluctant to sit too far back.

Discussing how United could stop Liverpool's creative, dangerous full-backs, Trent Alexander-Arnold and Andy Robertson, Mourinho explained United had two options in their 3-4-3: either their own wing-backs Ashley Young and Aaron Wan-Bissaka could step up and mark them, freeing Daniel James to join Marcus Rashford in attack on the break, or wide forwards James and Andreas Pereira could drop back to cover.

The drawback with the first option is it could leave United's three centre-backs exposed against Liverpool's front three of Sadio Mane, Roberto Firmino and Divock Origi, while the alternative could isolate striker Rashford and limit United's own attacking ambitions.

"Just by that decision in their gameplan will make the block much lower and more compact or try to put a little bit of attention in their counter-attack," said Mourinho. "That means they're going to be more defensive or more proactive in trying to score goals."

Mourinho could well be weighing up a similar situation ahead of Spurs' test with Liverpool.

Tottenham started with three centre-backs in their previous home game against Brighton on Boxing Day, with Ryan Sessegnon and Serge Aurier at wing-back, and seem set to deploy that same set-up against Liverpool.

With Harry Kane injured, Heung-min Son, Lucas Moura and Dele Alli are likely to fill the attacking slots - and Mourinho will have to make a decision on how those forwards play out of possession.

Will he err on the side of caution and instruct his wide attackers to mark Liverpool's full-backs or will he take a risk and hope the pace of Son or Lucas Moura on the counter-attack can hurt Liverpool at the other end?

A little over two years ago, Mourinho stopped Liverpool when he was in charge of Manchester United at Old Trafford and in October he was perfectly placed as a Sky Sports pundit to witness Klopp's side held at the same venue again.

It will be intriguing to see whether he can repeat the trick at the Tottenham Hotspur Stadium this weekend.